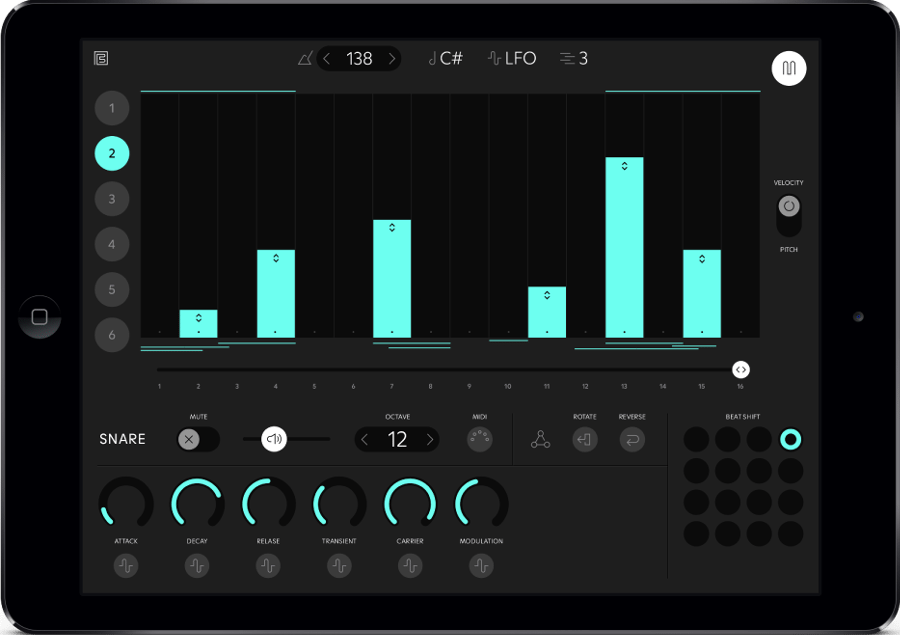 Forever Beats is an intuitive groove box, easy to learn and with a peculiar sound design.

You get six, 16-step sequence tracks to work with, and you can use the in-app sounds, or flick the MIDI switch and control another synth app or hardware synth with one of the tracks. With variable velocity per step and a selection of 8 different scales to choose from, there is also an arrangement section allowing you to turn your sequences into a larger piece with more variation.

The sounds of the app are “strange” in a good way, lots of modulated frequency and squelchy, metallic, noisy stuff, perhaps meant to be more of an atmospheric accompaniment to whatever synth you are controlling via MIDI.

This app could be compared to Xynthesizer, Fugue Machine and Auxy. Comparatively though, in Fugue Machine the built-in synth is more just a place holder – the whole point of the app is to control other synths. And in Auxy, you have a lot of cool sounds, but they are more bread-and-butter presets – not quite as experimental as Forever Beats.

These sounds have been created by Mei-Fang Liau who is behind Mellisonic and did the Ableton Max for Live synth called Polyphylla (see our Polyphylla review), an additive synth with an amazing range of controls.

Forever Beats does not use exactly the same sounds as Polyphylla, but there are some brilliant similarities, especially in the DRONE sound in Forever Beats which uses a shimmering cloud of partials which you can fluctuate manually or with one of the two LFOs. In the FM sound, a string resonator is used so that the oscillators can enter the resonant body with that bowed or plucked character.

Check out this promo video:

The names of the six sounds in Forever Beats are KICK, SNARE, METAL, DRONE, FM, and PAD. Using the sounds in this app can be compared to working with an Instrument Rack in Ableton, a rack where you do not necessarily have access to the underlying architecture, because it has already been mapped out for you.

In Forever Beats, you do not really get access to all the parameters you are hearing. For example, in the KICK sound, no matter where you put the knobs of the parameters or the octave of the pitch, it seems there is either quite a bit of resonance on some filter, or a stubborn envelope on the pitch.

I’m sure that frequency spike is what the designers were going for, but there is no way to change that if you wanted to. In this sense, even though the sounds are very unusual and edgy, they feel sort of limited. There are between 3 and 7 parameters per sound to tweak and 2 LFOs that can be assigned to any parameter.

To provide the experience that the user is really getting into the synthesis, I do think that there should be more parameters on tap, and they could be described more carefully.

The sound engine can feel a bit incomplete unless you accept the limitation that it has been expertly curated, and think of it as an atmospheric texture added to the MIDI controlled sounds. Again, this MIDI function of this app makes it really shine, as you send endlessly interesting rhythms to other synths. If you want to add some kind of sound without opening another app, try turning on one of the onboard synths and it will not be boring.

Playing With The Interface

Polyrhythms are easily obtainable with sliders, so one track can be 16 steps for example while another could be 15, creating rhythms that lock together and then phase out and return. To create those phasing minimalist patterns, just drag that step-length slider over.

There’s also a little BREAKS matrix at the lower bottom right side of the app where you can change the behavior of the sequence, controllable on each individual track or you can apply it to all 6 tracks at once. Choose a point on the matrix, and a new algorithm applies to your pattern. It basically creates what is perceived as randomization of the sequence. Just a warning: those new patterns quickly extracted and manipulated from the sequence you had already built, can get pretty dope.

Every track has a Mute control, separate Volume, an Octave range of 1-12, a MIDI section, some presets, a shift button for moving steps over by one step at a time, and a Reverse button for reverse the entire set of steps.

In conclusion, the best way to use this app I think is to use your MIDI controlled sounds to make melodic patterns, and the onboard sounds to add some sweet, mostly percussive weirdness to your melodies. Hopefully, as the app matures, the sound engine will be refined, and the degree of control offered to users can be expanded.

Over at the forum the John Hussey has made known his plans for continue development of the app. MIDI clock was recently added. Coming soon in future updates: Ableton Link.