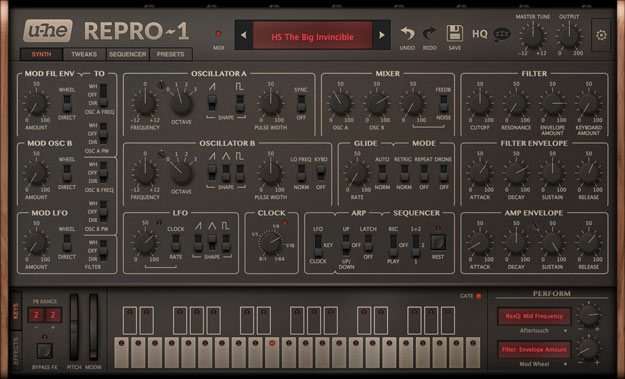 A truly beautiful sound for a soft synth. Instant flashbacks to the 80’s are a real treat with this instrument, but it’s capable of so much more…

Cons:
– It makes you wish it had a poly option!

U-he’s Repro1 is an emulation of the classic Pro One mono synth by Sequential Circuits back in the 1980’s. The Pro One was a popular, yet limited edition, and has been used by artists such as Depeche mode, Prodigy, New Order, Mouse on Mars and Prince, to name a few.
Said by some to be a mono edition of the Prophet 5, it’s popular for its punchy bass lines and searing lead sounds.

With Repro1, Urs and his team have gone for a faithful emulation of the original board, from the sound to the interface, even to the recreation of the 28 original presets printed in the manual, but with some classy tweaks to give the soft synth a slight edge in terms of flexibility over the original hardware.

The GUI is a fairly faithful recreation of the original setup. As with the original synth, each element is titled and surrounded with a neat white line. There are four tabs that give access to the sequencer, the preset window and the ‘tweaks’ window which I’ll come to later.

Oscillators
There are two – one a saw/pulse, the 2nd a saw/pulse/triangle. You can sync them, or turn the keyboard tracking off and switch to low freq on the second one, and use it as an LFO. Both have pulse width adjustment. There’s a mixer containing a third knob switchable between feedback or noise, to blend in with the 2 oscs.

Filter
The filter is a simple affair with a fixed 4-pole lowpass, interestingly capable of self-oscillation. There are simple filter and amp ADSR.

Sequencer
There are arpeggiator and sequencer switches on the front page. If you want to go deeper into sequencing, there’s a separate tab. U-he and team have expanded the options of sequencing from the original 2 patterns 20 step to 2 patterns of 32 steps that you can step record. You can also add rests or tie notes to make them longer; both impossible on the original.

Modulation
As with the GUI, and the oscillators, U-he have stuck faithfully to the original mod options. There are three mod sources on the side of the board – Mod wheel, oscillator B and the LFO, with five destinations: OSCA and B freq and pulse width, and filter cutoff.

U-he have expanded the modulation options slightly at the bottom right of the GUI, in the little ‘perform’ window, which expands the modulation massively with 2 slots of 15 sources and 60 destinations. This opens up the sonic capabilities of the Repro1 to a completely different level from the original machine. 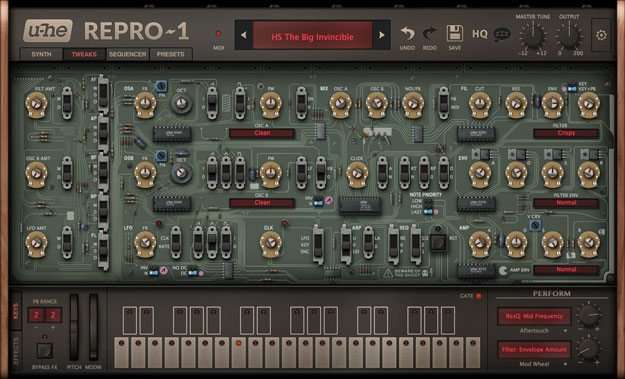 This presents the GUI as if the faceplate has been taken off, and the circuitry left uncovered. It presents a few options that enable subtle swapping out of certain elements of the circuitry, to change the tone and timbre of the sound.

As well as original emulations of the oscillators and filter, there are tweaked versions that the U-he team either think fit a more contemporary sound better or would fit the mix better.

I felt definitely that their oscillator cut a little harsher than the other oscillators and would perhaps cut through a mix better. It’s all a matter of taste really, but at least you get some options to play with.

You can also invert LFOs, change the envelope curve shape, and a couple other subtle things. I wish there was a mono/poly switch in there that enabled 12 voice two oscs per voice or something. That would take this over the top. But there are probably computational limits that prevent this. 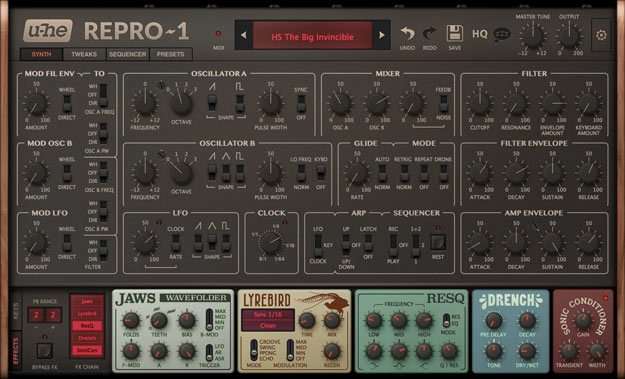 Without the effects, the Repro1 sounds excellent. These effects, however, are pretty special! There are 6, and they can be inserted in any order. But the type of effects is what makes this element stand out.

JAWS Foldback wave shaper, BBD (modeled) delay, Drench reverb (plate, with predelay), Sonic Conditioner, and RESQ(a kind of morph between a parametric EQ and resonator), all add up to make some rather unique but absolutely killer sound shaping qualities to this synth.

I especially liked the sonic conditioner – which added stereo width and beefed the transient volume to really get some snap on the envelope opening. I also loved the RESQ – which could be used as a basic EQ with shelves and a q – width, or as 3 resonant bands that could be used to emphasize certain frequencies.

JAWS is also excellent, able to add those extreme driving distortions that can only be obtained by wave folding. You can choose the number of folds, and even modulate them with an LFO. It can quickly bring the gnarl to an otherwise tame sound.

The sound
Well, what can I say? U-he have done it again. It’s a truly outstanding emulation of the Sequential Circuits mono synths. As far as soft synths go, I can’t think of one that competes.

The rich phasey buzzy tones of the oscillators are complemented by U-he’s additional Osc algorithms which shift the tone slightly to a more contemporary timbre, the choice ensuring a good fit in any mix. The filter is absolutely luscious, with the resonance sounding all gooey. Definitely one of the smoothest software filters I’ve heard.

Here’s the demo track from U-he, showing off the flexibility of sound from RePro1

Ohmygosh the sound is incredible. There I was thinking that emulations were old hat, and Repro1 comes and bashes me on the head.

It’s a truly beautiful sound for a soft synth. Just as the Diva when it first came out grabbed my attention for days afterward, and became a go-to soft synth so with this little beast.

Instant flashbacks to the 80’s are a real treat with this instrument, but it’s capable of so much more with the little tweaks that the team has implemented in the software.

My only thought on it is: If U-he tweaked the original circuitry to fit more contemporary mixes, couldn’t they have just added a poly option??

As with most of their other software, U-he recommends a fairly new processor to effectively run Repro1. I didn’t encounter any large CPU usage, but I was testing the software on 2 computers running the recommended CPU or newer. You’re gonna want a mac 2011 or newer to run it smoothly.

Get your copy from here. It costs $99 and is available for Mac and PC.