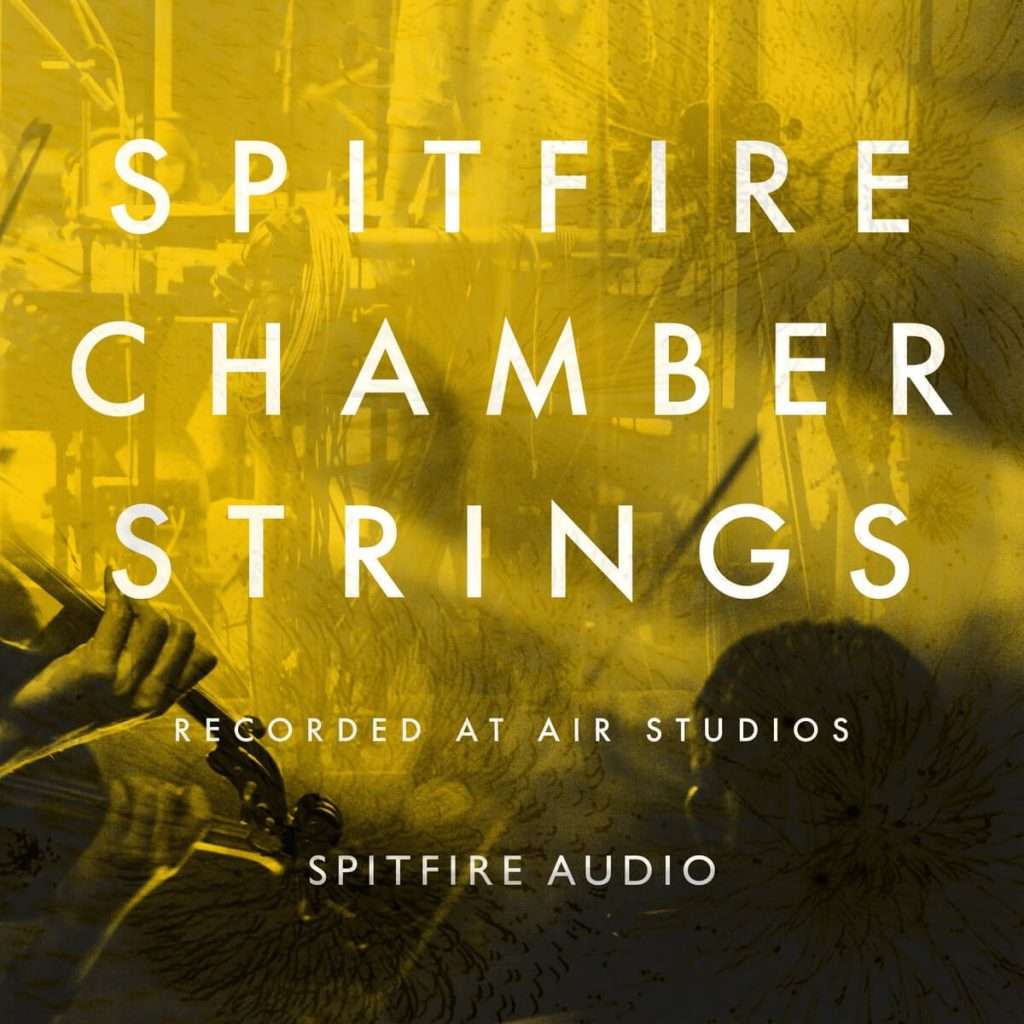 For material that requires a more intimate, dry sounding string library, this is the one to go for.

Cons:
– Considering the expansion pack, not cheap
– The Ostinato feature could be improved

Chamber Strings is the latest evolutionary step by Spitfire Audio to homogenize the GUI, and make a familiar brand feel whenever the library is opened in Kontakt. So Chamber Strings is a melding together of all the Sable String libraries previous – into one larger library.

The ensemble patch is fantastic if you’re just sketching out an idea – that one patch will cover most eventualities of a sketch, from long slow notes, sul ponte and tasto, through 6 different methods of shorter note to trills of varying intervals.

Beyond the default patches, there’s an advanced folder, which includes more unique articulations and techniques. These patches are where the true depth and detail of this library really come to the fore. Some of the patches I haven’t heard in other libraries.

Different variations on staccato, from the soft and fluffy ‘feathered’ to the more crunchy and resonant ‘Dig’; all produce different timbres. It’s the same with every general technique or articulation – there are 3 or 4 different versions that just give a depth and flavour to the sound. Here are the articulations in full: 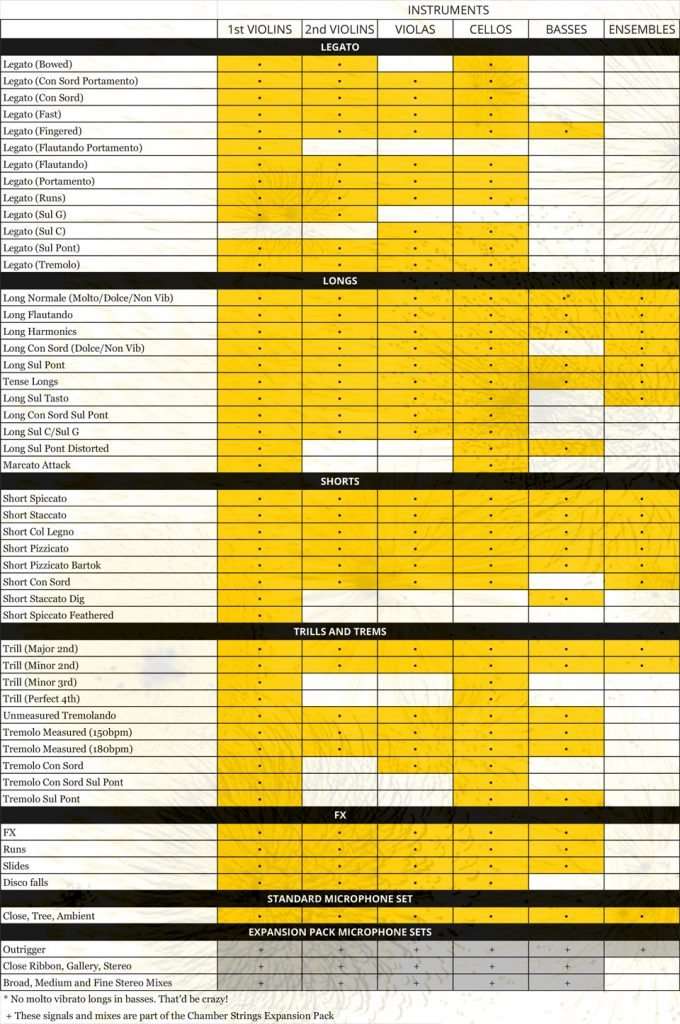 The way the GUI is programmed is what impresses me the most – as it provides the most intuitive way to quickly access these sounds. You’re not finding yourself trawling through patches endlessly trying to find the right one.

There are 5 different customisable ways of triggering key switches, from assigning specific midi channels (so you can have a separate midi controller from your keyboard to switch) through to the software intelligently assessing the way you play, and switching dependent on that. It’s by far the best approach to switching articulations.

The Ostinato machine is present, as with other Spitfire orchestral libraries. This is a great addition, but I feel is perhaps the weakest link of the programming structure.

You can create repeating patterns with assignable note values, that will then repeat regardless of what notes you play. You can assign the order in which the played notes are applied to the pattern, and you can save up to 8 ostinato patterns per patch.

This is fantastic for quickly writing complex rhythmic parts on the fly. I found the method of input a little clunky – especially seeing as you can’t delete any notes from the middle of the pattern. You have to delete all of them back to the point you wish to adjust. But minor complaint.

Further tweaking is possible by clicking the spanner icon on the left-hand side of the page. You can tweak each note if that’s how deep you want to go. You can load/unload and lock articulations, adjust the mix position more finely (With the initial library you get 3 mic positions – close, tree and ambient, although the expanded package gives you several more mic positions and types), lock the mic position to a specific articulation, and save all of the above as a preset.

I feel that the balance of immediacy to more expert tinkering is well kept in the GUI – you get instant access to the essential elements, and the rest are hidden, but just a click away. Excellent.

Spitfire Audio were getting requests from working composers A-list and on, for sampled strings that didn’t have the epic symphonic sound, and a bit more detail.

The company, after a bit of trial and error, chose the numbers for each section very carefully. They found that three players was the minimum possible to create a blended string sound. Less than that and your ear could separate the players.

I found the sound just incredible. The sound of the strings are at times crunchy, feathery, hissy, scratchy, just all the honest detail is there. And yet it’s still easy to get the sweeping lush, passionate tones you’re used to expecting from a string library.

There were so many standouts to me. The legato performance patches were highlights – you can adjust the speed of transition between the notes from fast swoops to slow glides between notes. It also measures how you play, and adjusts the tone and speed accordingly. Just beautiful.

I also like the two tremolo to tempo – set at 150 and 180 respectively, they can also be locked to host tempo, and work surprisingly well. I’ve not come across this before, and it works wonders for the energy of a piece, being able to set tremolo to tempo.

I found that the Expression adjustments were a lot more noticeable on a smaller string orchestra. Vibrato, for example, as you move the slider, the difference is more dramatic than on larger string libraries.

It feels like the dynamic range and expressiveness is also a little more extended, as you get so much more intimacy with a smaller ensemble. The tightness control – allowing sloppiness in the timing of the initial attack also is a lot more dramatic, as you’re dealing with less players. So the difference between a loose entry and tight alignment is very noticeable.

I also found the mic positions a lot more effective and distinctive; the close mics sounded a lot more woody – capturing the instruments resonance well. By the time you get to the ambient, there’s mostly the lush hall sound. There’s a really wide spectrum of timbres to play with just with the mic selection.

Symphonic string library sounds are amazing, epic, lush and sweeping. In their place they are unbeatable for capturing the ear and emotions with the romance of the sound. See here for what I thought about Spitfire’s symphonic strings.

Nowadays, composers in film, video game and television are also looking for a different sound – hence the call made out to Spitfire. And Spitfire have come up trumps with Chamber Strings. The sound is closer, more intimate and a lot more detailed, while still keeping the warmth and lushness of strings.

Here’s a perfect example of the detail available in this library; the feeling of immediacy with the players, and yet a great dynamic range:

I love the emotion in this example; the lovely blend of the ensemble, while at the same time clearly able to distinguish players:

Here’s a video walkthrough of all the elements of Chamber Strings.

Solo strings are extremely hard to sample and create a library for. I haven’t found anything out there yet that I think creates a realistic sampled solo instrument.

This Chamber Strings is the best compromise I’ve found so far – it’s intimate and detailed enough that you as listener feel right in front of the strings, as you would with a soloist – yet you don’t hear the lumpy and unnatural transitions between samples that you still, unfortunately, do with solo instrument libraries.

For material that requires a more intimate, dry sounding string library, this is the one to go for. It’s beautifully recorded, programmed and presented to you as composer.

It is stunningly intuitive and simple to use within Kontakt, and with NKS built-in, and clickable manual right there in the library, you can’t go wrong.

Spitfire Audio’s Chamber Strings costs £599. And there is an expansion pack with additional mics and mixes for more stereo width, or even closer intimacy, for an additional £399.
For more info see here. There are also crossgrade prices if you already own some or all of the Sable libraries.

For material that requires a more intimate, dry sounding string library, this is the one to go for.

Cons:
– Considering the expansion pack, not cheap
– The Ostinato feature could be improved