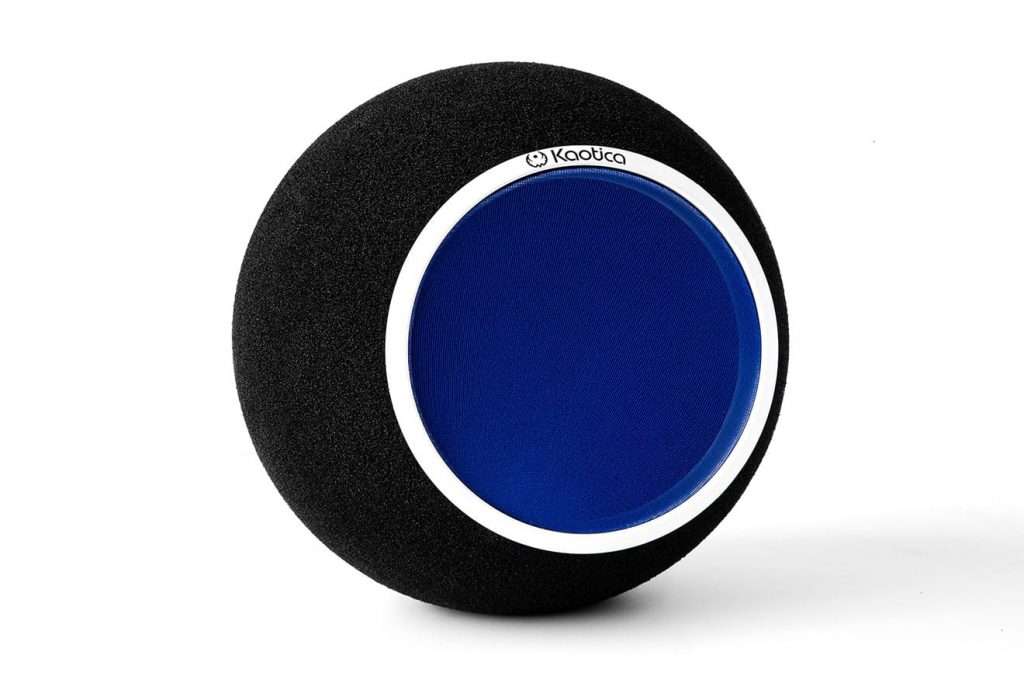 Kaotica’s Eyeball is a must have for the property stricken or mobile producer.
Pros:
– It does exactly what it says on the can
– It’s truly portable and is a great mic-protector
– It looks crazy
Cons:
– Price
– It looks crazy

It hasn’t slipped our attention that whenever something great comes along that poses a threat to the established, elitist order of all things pro-audio, it stirs up the mud. We’ve been hearing an awful lot of opinion about Kaotica’s Eyeball and not all of it positive. Why should this be? In a word, fear of the democratization of audio recording.

This is always the reaction from the old guard when some dope new technology appears that lowers the entry fee for young producers and helps level the playing field to a point where someone with a laptop, a $100 I/O, a $100 midi controller, a decent mic and a copy of Ableton can make hit records (Skrillex anyone?) Enter Kaotica’s Eyeball. A seemingly unimportant gimmick that appeared sometime in 2012 with very little fanfare.

The idea behind the Eyeball is that it prevents the vocalist having to fight the amateur-defining onslaught of room reflections when recording vocals in an untreated acoustic environment. But why has so much energy been funneled into discrediting the Eyeball?

There are a great many sound shields available such as sE’s , Sterling’s VocalShield, Prime Acoustic’s  etc. Nobody bothers stepping too hard on these offerings because they don’t even come close to a genuine solution. Therefore they don’t pose a genuine threat. In fact, these reflection filters only partially deal with the issue of room reflections rather than with the real problem… The untreated room itself.

Kaotica used the absolute quintessence of out-of-the-box thinking when it came to the Eyeball. You see, rather than try to minimize the morass of destructive waves and sound reflections in a room by shielding one small area behind the microphone, they seem to have said, “how about we control this cluster-f*ck by enclosing the microphone”. This way the singer delivers their vocal directly into a microcosmic, controlled environment containing the microphone. Essentially the Eyeball becomes the room.

And do you know what? It actually works. Really, really well.

Let’s go through the somewhat simple process of setting up the Kaotica Eyeball. 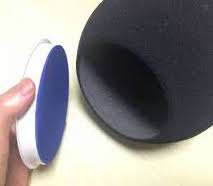 Firstly you remove the blue disc from the front which is a double-layered pop filter which enables you to access the interior of the eyeball. Kaotica say the following on their website: “Be sure to insert the microphone from the inside of the front cavity through the top of the microphone opening (rather than push it in from the bottom), since the thickest part of the mic will be on the inside of the cavity.” This is so that you don’t misshape (or God forbid, rip) the aperture. Your mic can be perfectly seated by gently working the capsule downwards, making sure the entire diaphragm is still visible from the front. Most microphones will fit in the hole – certainly anything between 1.5” to 2.75” according to Kaotica – which is almost all large diaphragm condensers. 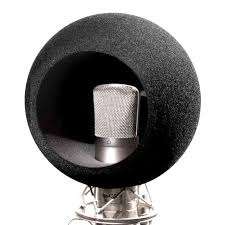 Push the mic In bottom first through the front

Be sure to seat the microphone with the diaphragm facing the front (the gold dot on a Rode or the red insignia on a Neumann) and then replace the blue pop screen – (a very tight fit). The Eyeball should rest comfortably on the shockmount cage. 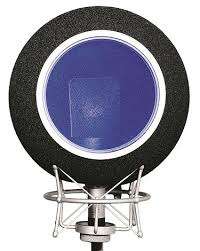 You can always use your own pop filter if you desire, The correct way would be to remove the standard one and place your own as close to the aperture as possible. 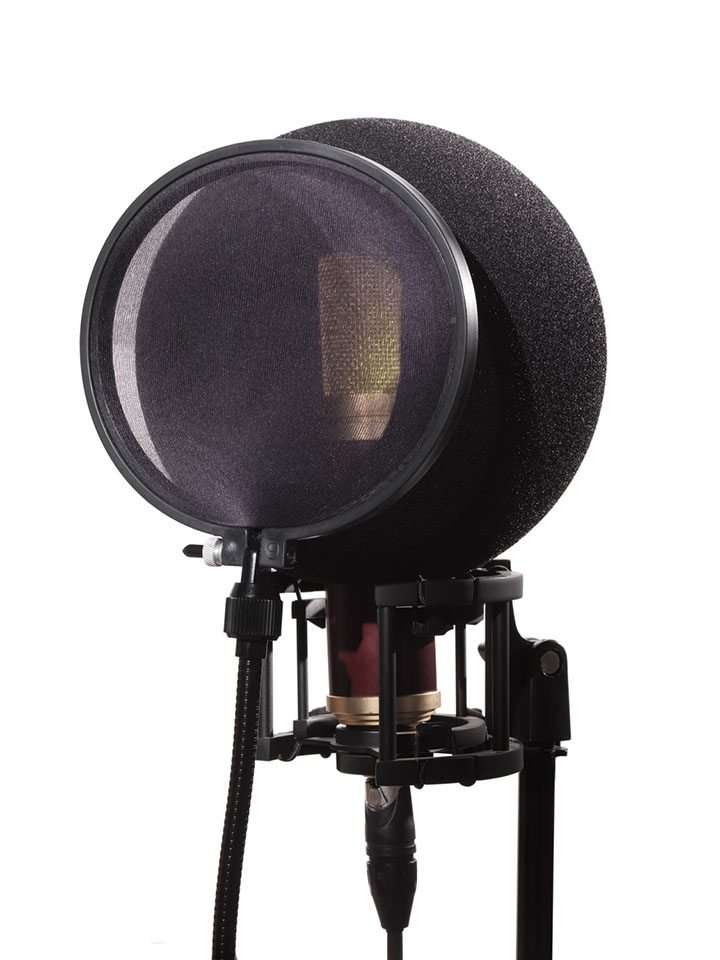 Using Your Own Pop filter

We chose to use the Eyeball with the OE popscreen, though it should be advised that if you have an overtly plosive-prone vocalist then it might be smart to use a Steadman ProScreen or equivalent placed over the standard filter. Thanks to the fully enclosed design, however this will most likely be unnecessary as there are no gaps for those powerfully blasting B’s and P’s to escape. We found this to be the perfect compromise with powerfully spitting rappers.

For most singers the best results are to be had placing them as close to the blue popscreen as possible, maximizing the amount of vocal that enters the Eyeball and minimizing any reflected sound from entering the mic.

The results speak for themselves. In comparison to your untreated space, a smoother tighter vocal will be immediately apparent. The noise floor is markedly reduced and that boxy, uncontrolled room sound is gone. We’ve even heard complaints of the vocals being too dry! Now there’s a great problem to have.

Mics tested were the Neumann TLM 103 and U87, Telefunken AK47 Mk1 and the ubiquitous Rode NT1a. We used the Eyeball and mics on Voiceover, Rap and pop vocals.

When using the Eyeball you will no doubt notice a slight increase in gain on any microphone. This is down to the channeling effect of the foam and the limited space around the Mic capsule. This is easily dealt with by lowering the input gain on your preamp or interface.

We found that the TLM and the U87 were very similar with perhaps the 87 feeling a little more ‘warm’ in the lower mids. With the Telefunken the low-mid bump was so slight as to be almost completely unnoticeable and of all the mics tested the AK47 and the 103 retained the most of their original sound and character with singing, rapping and voiceover. The minute increase in the low midrange that varies from one mic to another. We didn’t find this to be a very important issue as you will no doubt be EQ’ing this range as standard procedure and according to Kaotica, it varies by no more than ±1.4dB up to 30kHz.

Of all the microphones the NT1a showed perhaps the most dramatic improvements across the board. On voice over work, the normally jagged highs of the Rode were nulled almost completely. In a large, wooden floored room that was wider than it was deep the NT1a was almost unuseable for voiceover work. It’s sensitive capsule picking up masses of noise from the room including the loud computer fans. There was over a 10dB (±2dB) reduction in ambient noise. 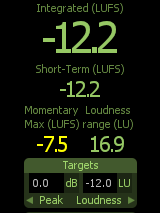 The dramatic reduction in background and ambient room noise was a very welcome addition on all of the mics tested and many will find it’s literally the difference between ‘getting away with it’ and not. 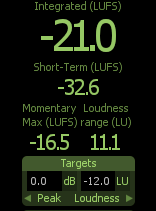 A lot of producers are also enjoying the freedom that they can now have to allow certain vocalists to record in the control with them. This is how a great many artists like to vibe these days as many are familiar with DAW edit screens, or simply want real communication by being next to their producer. I have a songwriter and demo vocalist who loves to write and vocalize lyric and melody ideas instantaneously. Thanks to the Eyeball we are able to get lovely clean demos right there in the control room using both the TLM 103 and the AK47. The AK is our choice mic because the results are frankly pristine, meaning we don’t need to re-record at a later time. This is a huge improvement in workflow and a massive time-saver for the whole production team.

The unique, ‘gimmicky’ shape of the Eyeball turns out to be one of its core strengths as does its ability to deaden the sound of your recording environment. Up until now the most important tool for dealing with an unsuitable room was a transient designer (preferably SPL’s) and Izotope RX5’s DeReverb module (see our iZotope RX5 review). You can get away with a fair amount this way but, ultimately there’s no denying it – this is what’s known as cleanup. Why deal with recording mess in the first place?  For sure you will see the most dramatic results the worse your recording space and the cheaper your microphone, which is fitting for the purpose of this review. At $198 the Eyeball seems expensive but honestly? How much are great vocals in almost any environment worth to you?

Speaking of ‘complicated’ recording and mixing environments, if you would like to improve the calibration and stereo imaging of your monitor speakers and headphones, make sure to check out our Sonarworks Reference 4 review!

Baby Brown is a composer/Producer and guitar player.