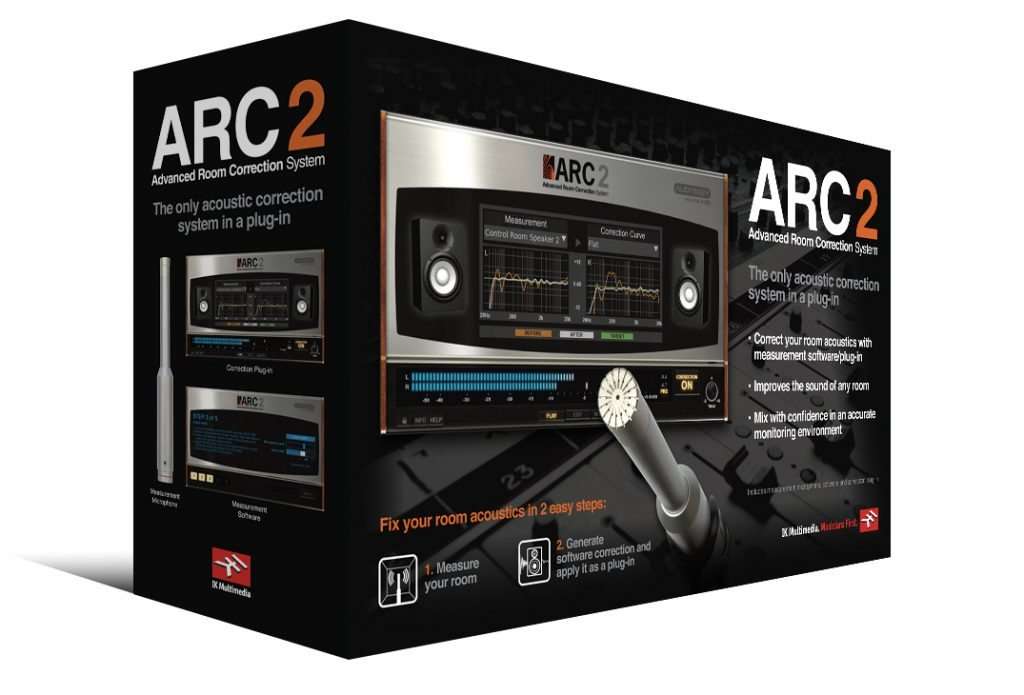 The improvement to the stereo image was undeniably clear.

Cons:
– Some manual EQ tweaking may be necessary

IK Multimedia are a creative bunch. You can’t really nail them down to a particular stream of product development; Their fingers are firmly squished in an eclectic range of soft and hardware pies. Their ARC2 software/hardware combo is a useful tool that moulds the sound coming out of your monitor speakers to correct the inevitable dips and spikes you’ll have in your rooms frequency response.

ARC 2 comes in a box with software, license codes and with its own calibrated Omni directional mic. The mic is calibrated specifically to the software, to eliminate any characteristics from the mic itself. If you used another microphone, the software would not work near as well.

Once downloaded, the software painlessly walks you through the process of setting up your system, taking measurements, and applying those measurements as a linear phase EQ to the final stage of your sound process. You can then work as you usually do within your DAW, creating/mixing/mastering your art, but with much better sonic reference to deal with. 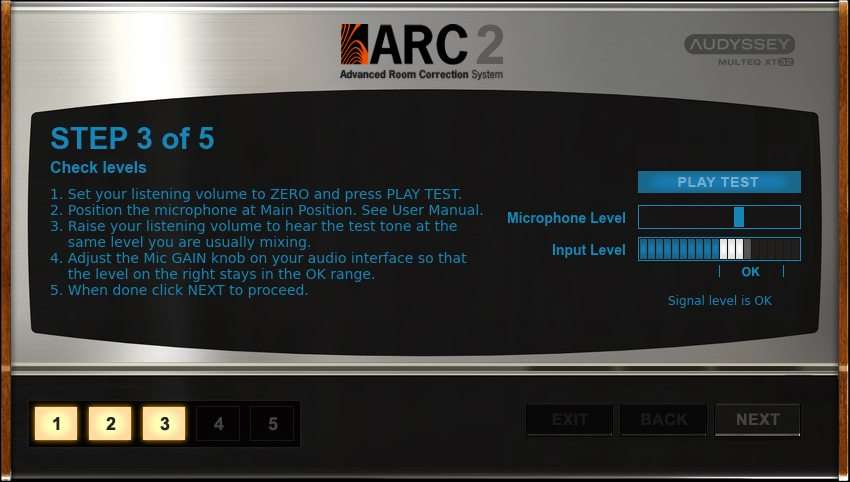 The walkthrough is simple: You plug the Mic in to a preamp, either on your sound card, or directly attached to the sound card. Go as clean as you can, to get the flattest response you can.

Once you’ve level checked the microphone, you begin the test. You place the microphone in up to 16 different places: the technique to placement is shown in the provided manual; you want to make each alternate placement symmetrical with the listening position. The more placement tests you do, the more accurate and defined the resulting correction will be. You can also adjust placements to allow for more than one listening position (Band couch, or two people next to each other), and this will alter the correction slightly.

Once the test has been done, and ARC has ‘read’ your room, you load the plugin into the DAW you use, on to the very last spot on the Master Buss, and activate it, with the preset you saved of your room correction. Simple as that.

The effects of ARC 2 on the sound in my room was immediately apparent. The stereo image sounded a lot tighter to me, and the frequency areas in my room (170 and 350Hz) that I know i have issues with were mostly flattened. The bass response in the room was noticeably better/tighter, and I found it very helpful in hearing what was going on down there. One thing that I wondered was whether having a terrible room response, with small speakers would create dips and spikes in the bass frequencies that ARC2 would try and compensate for, on speakers that just couldn’t cope with the levels being thrown at it. Thankfully there is a function on ARC2 whereby you can turn on Full bass range correction mode, which compensates better for smaller speakers. The L/R correction mode also helped, as my room is asymmetrical, and it takes that into account with this mode. Using this mode helped place stuff in the stereo image much more accurately, and I could hear placement of sound more easily. There are several EQ customisation presets you can save, where you can tweak the corrected EQ to suit your ears, so if the flattened response just isn’t working, you can edit it until your ears are even more comfortable. 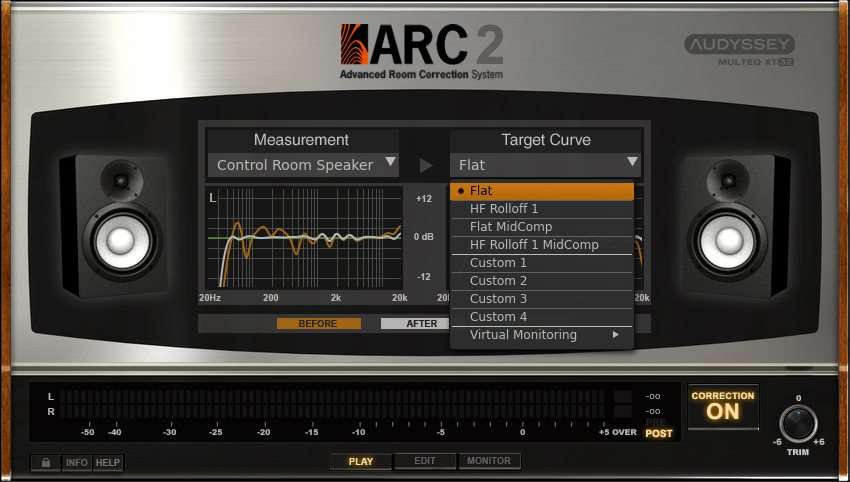 I particularly liked how clear the software is in guiding you to getting a good measurement. There are many pitfalls you’ll encounter as an elementary acoustician, and the steps ARC 2 initiates remove most of them.

I liked the way you could use the monitoring plugin to flick between different listening modes emulating different speakers. This potentially saves a lot of time, if you don’t have secondary speakers in your room, and are constantly trouncing down to the car to have a second take.

I did find that it needed tweaking. I think at the end of the day, how things sound needs to be as personal as it is accurate. I found that I had to do a bit of manual tweaking to the EQ to make it feel just right. But the improvement to the stereo image was undeniably better.

I found myself wanting to apply the ARC2 correction to all elements of my listening in my studio. It would be good to have it integral to the sound preferences of the computer, so you could listen to reference music outside DAW with the correction applied. There is a workaround to achieve this, but it’s a bit fussy, and it would be excellent to be standalone in the system.

The main element of getting a room right is always acoustic treatment. Get the old measuring tape and hammer out, and construct yourself some bass traps, and some broadband panels. It’s very do-able, if not a bit time consuming.

Failing that, go buy some. Room treatment should always come first. Then Monitor placement, then software like this. I would say ARC2 is an essential addition to your acoustics arsenal, to tip the scales slightly more in your favour when it comes to flat response, and solid stereo image in your control room.

To use ARC 2 – you must have the required hardware, which is a little more defined than for our usual reviews. You must have a Core Audio compatible interface that can run 48K. I know this is probably a non-issue in this day and age, but worth checking if you’re not sure. And you’ll need pre-amping to power the mic.

ARC 2 can be purchased for EUR 365.99 and for more information see here.

Also, if you would like to improve the stereo imaging of your monitor speakers and headphones when listening to/mixing music and sound. make sure to check out our Sonarworks Reference 4 review!