At SUPERBOOTH16 I had an inspiring conversation with Davide Mancini from Soundmachines, a fairly young Italian boutique synth company (quite well known in the Eurorack world, thanks to its pretty unique products).
We talked about building electronic instruments (of course), washing machines (true!) and many other things in between. Most importantly, I had a chance to see a prototype of an upcoming tabletop synth with some very nifty features, the MODULÖR114.

Personally, I love tabletop units because (in most cases) they strike the perfect balance between ease of use, portability, price and creative results. Needless to say, once Davide started explaining the concept behind their new instrument, I was all ears.

For those entering the modular world or looking for a flexible standalone unit, MODULÖR114 seems to tick all the boxes. Now that the first batch has been shipped, I asked Davide some questions about his new synth-baby and what to expect for the next year…

– At first glance, the MODULÖR114 may look similar to other recent tabletop units, but it packs quite a punch. Can you tell us more about the concept behind it?

Exactly one year ago we started producing the NS1nanosynth. Albeit very particular in format and hyper-dense in functions, it quickly became very popular and, almost surprisingly, a very successful product. As of today, we have sold almost 500 NS1 and a new production run is under way! Many people liked the sound and the richness of this small machine but asked us to make a better interface for the NS1nanosynth with a standard Eurorack system.

We started thinking about a euro version but soon we realized that the project took a whole new direction. At a certain point, the panel reached more or less 60 hp so we decided to scrap everything and start again. In January we were  invited to the Superbooth and, in our high-risk taking attitude we promised to present something unique!
I started thinking about the many people I met at meetings, fairgrounds and on the web and while everyone was interested in the potential, the sounds and the aesthetics of the modular synth, a pretty much unspoken fear was surfacing from them. 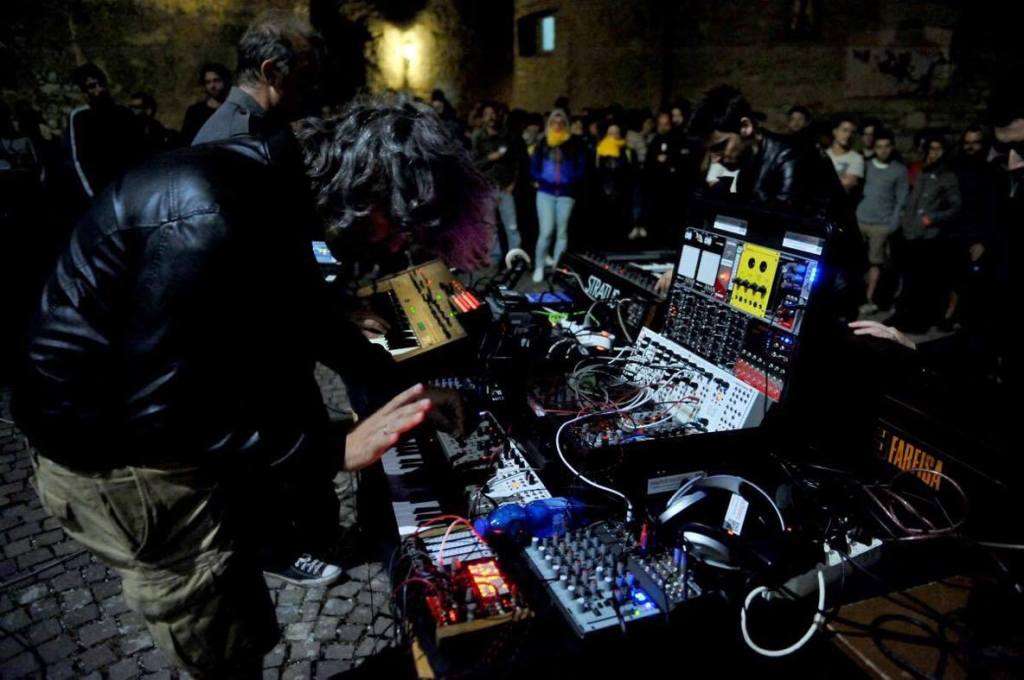 Starting in the Eurorack world is not easy, nor is it cheap. Even if you take the DIY route, and value your hourly rate at zero (eh eh) you end up spending a lot of money to have a complete system.
In our view, a complete system is something that is articulate, both in basic modules and in connectivity and includes a few ‘keystone’ modules that really make it possible to play the thing without any other stuff.

So we chose to include a few selected subsystems: a case and a power supply, a midi/cv interface capable of interfacing also with a USB keyboard, an FX unit to add depth and movement to even the simplest of sounds/noises, a ribbon controller, that got a great response on the NS1nanosynth, a scale quantizer and finally, an output headphones amplifier to directly drive your favorite cans.

Another key factor of the M114 is the portability, not only in terms of size, but also when it comes to battery life.  A typical USB powerpack can supply the MODULOR for hours!
Last but not least, a feature that many beginners and shop-owners loved: one button SYNTH. By pressing a button you implement a fixed architecture mono synth without even thinking about patch cables.
A superficial view would liquidate this as a ‘normalled’ patch but the experts out there can tell you that it really is something different. To interrupt every single normalled connection in a standard module you have to insert a cable in the relevant jack. Here, without the SYNTH light on, everything is disconnected and free to patch!

– What are you most proud of?

This is the first complete out of the box machine that we made. We are very excited by its capabilities and its sound palette. We tried to put in a single unit two very different types of modules: the bread and butter, standard (at the same time peculiar) VCO and VCF and the uncommon (in a base system, but not only) quantizer, ribbon controller, and clock/digital part, set apart the FX unit!

We are also proud of the price point. I challenge everyone to build a similar system…
In the meantime, Moog presented the Mother32, at a very good price point and with a good set of stuff. We needed to step it up keeping the cost under a grand.

– In terms of ‘synth philosophy’, where does the MODULÖR114 stand?

MODULÖR114 has a pretty clear east-coast approach, the timbral character of the sound is linked to the ‘filter’ and the modulations are the classic ADSR and LFO. At the same time, the MODULOR has many little objects that can be used to implement some west-coast principles like waveshaping, hands expressivity and odd-measure rhythmic stuff.

In particular, the two ADDSUB blocks, being limited to a certain voltage range (they have an intrinsic saturation over 5V) can be patched to resemble several types of waveshapers. Along with the VCOs triangle out and the LFO you can add a pleasant wavefolding harmonic character to your simple oscillators wavefoms…

I can’t say too much here about what’s coming up, but we are studying something that is ‘really’ west coast’ in many ways. You can consider it the Californian brother of the MODULOR114 🙂

– Being packed with features, the unit is necessarily more expensive than other related products. Who is your target audience and what is the feedback you got so far?

We sold out the first batch in no time and it seems that at 899€/999$ there is not a real contender with the quantity and quality of modules of our white slab. Actually, it seems that it suits the desires of the people who are new to the Eurorack world, also regarding the price point. Coming back to the original question: our audience is divided in two: beginners/enthusiasts of modular synthesis and experienced musicians/sound designers that want to taste the flavour of ‘physical’ modular systems without investing double the price to achieve comparable results (this is the figure that we based our analysis on at the beginning of the project).

– Compared to other Eurorack companies’ products, the overall visual aesthetics of the MODULÖR114 are very linear and clean (some might say unassuming and bland!). What’s your take on this and do you plan on offering a different design sometime in the future?

Here I have to firmly disagree! 🙂 We wanted to be ‘different’ from others (as in aluminum/black/fluted knobs), and we’ve received many compliments on the overall graphic design of the object.
In this particular case, with this ‘density’ of functions and modules, it’s really DIFFICULT to have a good degree of freedom in graphic/font/functions design and so we had to stick to a high-functional/no-frills approach!

Anyway, to give back some hope to personal tastes, we have TWO other chromatic models in mind and maybe next year we will have another color. 🙂
The design aspect is clearly very important, and to be honest, something that we still have to invest the right amount of money on. I take the question as a great stimulus to widen the research in that direction. In the end, you know, we are a mix of nerds, musicians, and engineers and we still have to learn to behave. 🙂

– This is your first standalone product, can we expect more? Hints? 😉

You got it framed correctly! This is the first of a self-contained product line that in 2017 will expand in several ways. We have at least two big siblings on the design table and three or four very interesting modules at various stage of development.

Thank you Davide for sharing your thoughts with us.
For those interested in the MODULÖR114, please visit the Soundmachines website.