Pros:
– Phenomenal sound
– It’s about as all-encompassing as it gets

Cons:
– No sympathetic string resonance for pianos
– No options on mic placement for pianos

Spectrasonics definitely don’t rush their libraries of instruments, and with good reason: it takes a long time to make such massive, excellent musical tools. Keyscape is no exception. 10 years in the making, it is a treasure trove of sampled keyboards, with the trademark Spectrasonics stamp of quality, and tricks up the proverbial sleeve.

Keyscape is a huge and power intensive 77GB library. Minimum recommended RAM is 8GB, and 2.2Ghz dual core CPU. Not to be sniffed at. Keyscape consists of 36 instruments that span the history of the keyboard in music. From Electric Harpsichord through Yamaha C7 Grand and Wing upright, Rhodes and Wurlitzer to CP70 and weird unknowns such as the Dolceola and the Chimeatron. Also some real eclectic niche instruments such as the Rhodes Piano Bass, and some specific Roland digital pianos. 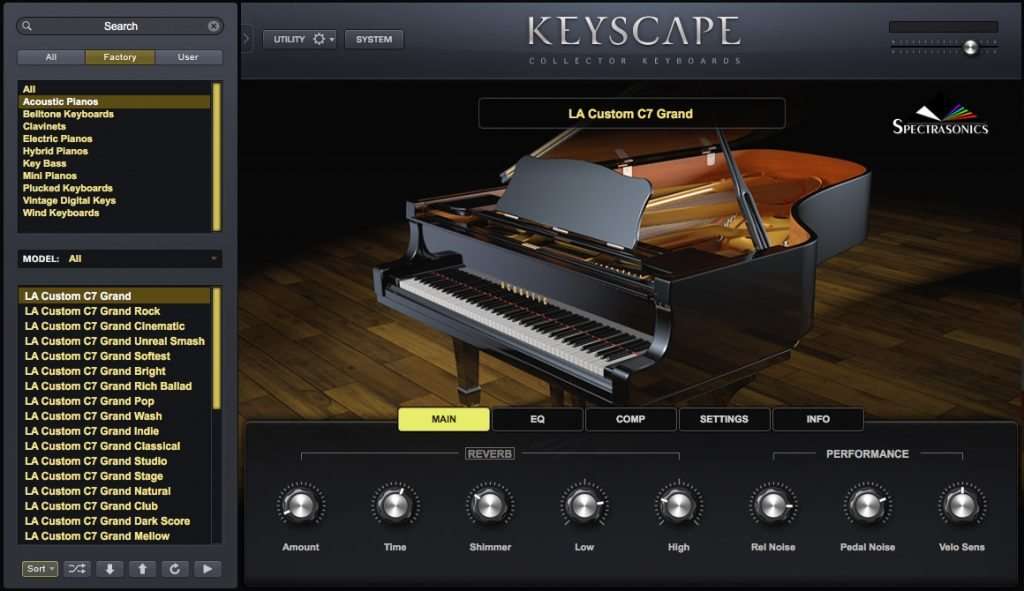 Immediate first impressions?
Well, I still don’t think libraries even come close substituting the real thing. However, Spectrasonics have made big steps forward in my opinion with a couple of elements. The velocity layering – a massive 32 layers, is really impressive. The careful attention to controller sensitivity is also very important. There is a simple XY window at the bottom of the GUI that enables you to quickly set the velocity sensitivity of the piano for all the keyboards in Keyscape. Spectrasonics have also started a preset library for controller keyboards to give you quick access to the best setting for that particular keyboard. Unsurprisingly my hammer weighted controller quickly felt very alive and responsive; much more surprising was my synth weighted controller, once I set the preset, felt almost as good as the weighted controller. 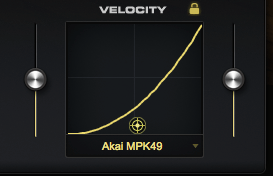 Those two elements combined make for an instrument that really comes alive under your fingers, much more so than other libraries I’ve played. I was super impressed with how inspiring it felt. Of course, we’re talking subtleties and personal taste here, but I was wanting to keep playing it, which I find is always a good sign. It didn’t feel plastic, which is a description that sometimes comes to mind when playing some other libraries.

The Flagship Grand
I’m not normally a fan of Yamaha Grand pianos; finding them way too bright for my taste. I’m guessing, however, that the customisation of this particular C7 model went some way in addressing that. I found the initial patch (there are 21 others) a lovely balance of warmth, and woodiness. It was still bright, but not as cutting as I would expect. In terms of expressiveness, I found it incredible, the deep sample layers making the instrument extremely responsive, and very realistic.

I spent a long time playing staccato and listening to the sample release, as that’s often where the sample pianos fall down. (before you say anything, yes I am a dork) With this piano, I feel that they got it just right. Different keyboards responded with different amounts of natural resonance after the note was released. There is an additional performance section in the GUI that, in the case of the pianos, directly addresses the sounds around the note, so to speak. There’s a little ’T’ button, (for transition), which slightly slows the release – giving a different option if you’re looking for a slightly looser sound. There’s also a knob that gives you control of the natural resonance, and key clicks, so you can further mess with the release sound.

With the C7, as with all the other instruments, there are several sections within the GUI that enable you to affect the timbre and character of the sound. There is a reverb, with an excellent shimmer function that gives the reverb a slight chorus effect; lovely for more cinematic or ambient sounds. There’s the aforementioned performance section, giving you control over note resonance, but also pedal noise, and velocity sensitivity. There are a 2 band eq and two types of compression.

If you move on from the main sound and select one of the 21 presets for the C7, the GUI then also contains a character section, Which offers various options to further tune the colour of the C7. So you might choose a dark or soft setting for more intimate, quiet music, and studio, or hard settings for a more rocky band piece.

Acoustic upright
The Wing acoustic is just lovely – a nice alternative to the grand piano. I loved how each note had just enough character to stop it feeling homogenous, but really bought the piano to life. It had a really woody sound to it naturally, but with a bit of tweaking, made for a lovely dark sonorous cinematic piano with the gorgeous organic clicks of the keys just cutting through. Although if you want the classic honk, there’s the honkytonk preset which takes you straight to the swingdoor saloon. Brilliant.

Electromechanical
This is where the richness and depth of Keyscape start to become apparent. Not only do you get excellent renderings of upright and grand pianos, you get perhaps the best sample libraries of the Rhodes and Wurli that I’ve come across yet. Two Rhodes, one a suitcase, one a mk1 by the look of it. One naturally more bell tone, the other a bit more nasal and crunchy. Both of them with loads of useful tonal and modulation effects. There are two kinds of Wurli – 140B and 200A. I’ve never played the 140B, so that was a nice new tone to play with. On each instrument, there’s an interesting info section that gives you a little history of that particular keyboard, with tips on how to get the best out of it. Brilliant! Again the Wurlitzers have loads of adjustable options to get a huge range of sound. want a bit more mechanical sound than direct amped sound? You got it.
But is that it for electro-mechanical? Not even close. There’s a modern version of a Rhodes, by a company called Vintage Vibe, that offers a more contemporary take and tone on the Rhodes. There are 3 Pianets by Hohner (think Wurli but buzzier). There’s a Weltmeister Claviset: sonically a crossbred Rhodes and Wurli. There’s a gorgeous Yamaha CP70, and four different Keybasses. Unbelievable. All of them meticulously sampled, tweaked, and playable.

Getting quirkier
It would take too long to go through all the instruments that are included in Keyscape. (Here’s a webpage that outlines and gives info about each one) In total there are 36 separate keyboards sampled. Each of them has a large handful of presets, and each of them has a large number of parameters to mold the colour and palette. There are Clavinets, an electric Harpsichord, toy pianos, Celestes and other bell tone keyboards. There are a couple of classic Roland digital keys (that had patches originally created by Eric Persing) that have been sampled. ALL of these keyboards sound phenomenal. Of particular standout to me were the Dulcitone, which sounds like a big gritty music box, and the Harmochord, which is an amped and electrified harmonium. If you’ve not heard a harmonium, get online and listen. They’re beautiful sounding, and this instrument does no disservice to the real thing. A harmonically rich reed instrument.

Steaming
Keyscape is made using the STEAM machine, proprietary software to Spectrasonics. That means that it slots neatly into the flagship synth Omnisphere2 without any effort; the original sound sources and patches from Keyscape load in as one of the sounds in a multi. With a quick click of a button, you can flick across to the original Keyscape GUI within Omnisphere. That is really efficient and so flexible. The sounds can be integrated with any other sound in the synth, essentially rendering the sonic potential of Keyscape to absolutely limitless (CPU and RAM withholding!) combined with the massive synthesis power and flexibility of Omnisphere. There is a duo section in Keyscape that blends two instruments together to create more unique keyboard sounds. But with Omnisphere you can create an unlimited amount of these within the synth itself. If you don’t have Omnisphere already, I can highly recommend. See our previous Omnisphere review. 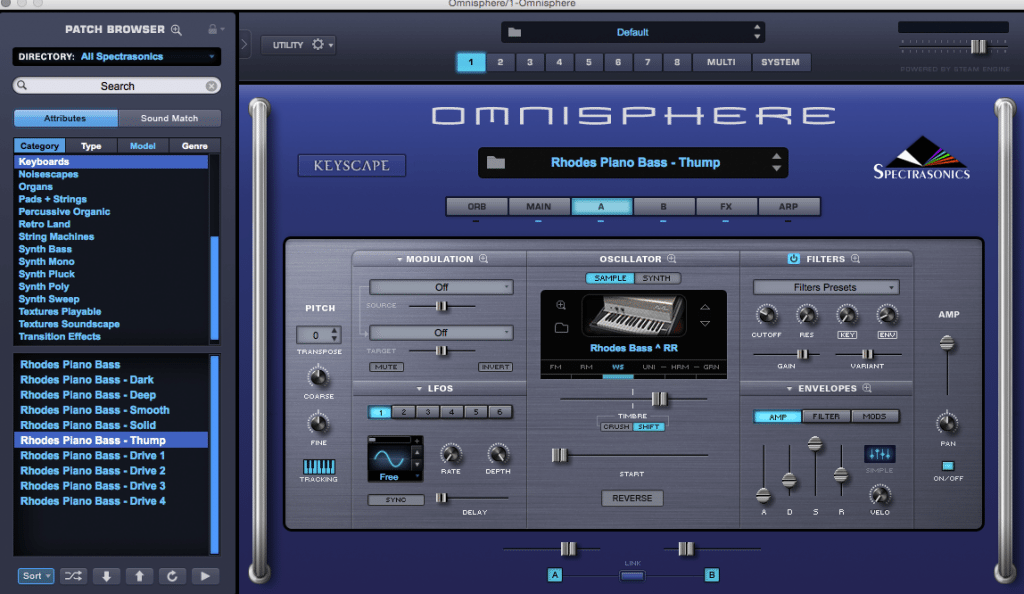 Conclusion
There is not really much missing from this library in terms of keyboards. It’s about as all-encompassing as it gets. The sound is phenomenal, and you can tell that there has been a massive amount of attention paid to the small details that really bring an instrument to life.

If there were a couple things I might wish for, however, it would be these; with the acoustic pianos, I would love a resource for sympathetic string resonance, which is something that crops up in other sampled piano libraries.
Another thing I found myself wishing for were options on mic placement for the acoustic pianos. The default setting here is fairly close and intimate; a players perspective. Sometimes, you want a piano that sounds a little more distant. Of course, that is workable with reverb and some spatial adjustment, or mono-izing, but it would be great to be able to select mic position somewhat. They’ve done that with some of the other smaller instruments in the library. Maybe it would just become a Gigabyte monster if you added extra mic placements to the pianos.

These two things are fairly minor in the grand scheme of things, however. In terms of bang for your buck, everything sounds absolutely gorgeous, and you’re going to hear keyboards you’ve literally never heard before. I’m looking at you Weltmeister Basset 1 and 2. For a combination of recognisable keyboards, alongside fresh, unique tones – all immensely responsive and playable, you are absolutely not going to beat Keyscape. Spectrasonics have outdone themselves.