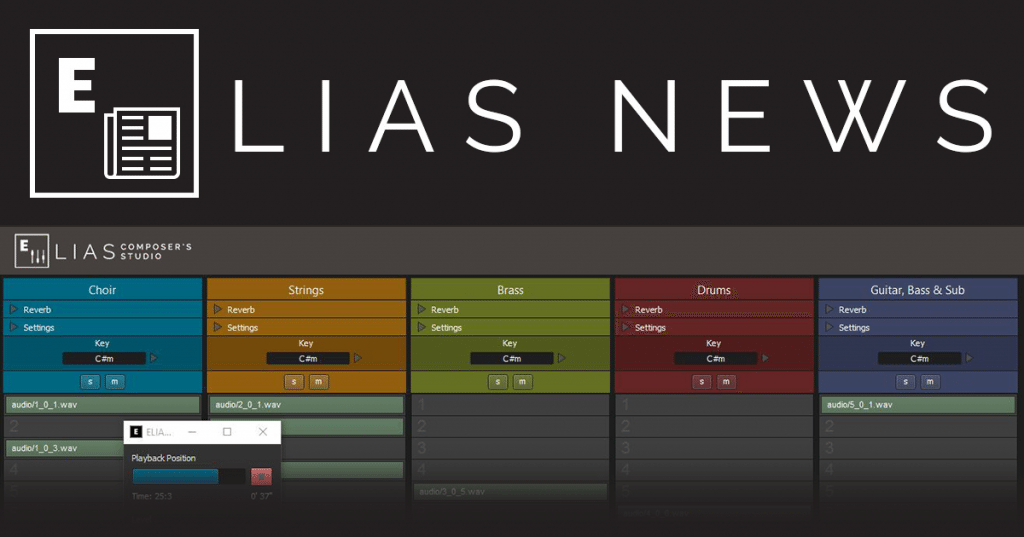 At ANR we don’t usually cover game music software, but the much anticipated ELIAS Music Engine and ELIAS Studio version 2.0 have now been released and look pretty interesting.

Elias Software is a company based in Stockholm, Sweden founded by Kristofer Eng and Philip Bennefall. The company is dedicated to providing innovative solutions in the field of video game music rendering.
ELIAS Elastic Lightweight Integrated Audio System, is a music engine which attempts to change the way we perceive and experience interactive music in video games.

With the ELIAS Music Engine, composers and game developers can easily collaborate to create musical scores that adapt based on the player’s actions in the virtual world.

This update promises to be the biggest yet, with an arsenal of new features such as ”Transition Presets” and the inclusion of a mixer; improvements on older tools like the renovated track view and under the hood, the ELIAS Music Engine promises to deliver the same versatile results to the world of mobile gaming thanks to streamlining without sacrificing power.

The first improvements will be immediately visible upon first starting ELIAS Studio 2 – the entire GUI has had an overhaul. With a context sensitive Inspector and customizable layout of windows, users will have everything at their fingertips, especially with the ELIAS Player now always accessible, allowing for a more effective and controlled workflow.

There is now a Stinger level slider which enables a more fine-tuned approach to creating dynamic adaptive music. ”Multi-Themes” make it possible to transition musically between several Themes while level variations offer a new way to follow in game events and narratives with deeper customization thanks to the new segment tool.

Users will be happy to know that ELIAS Studio 2 includes a mixer, giving them the option to create their final mix within the program, plus the ability to modulate and sweep in real-time together with Action Presets. This updated version of the Composer’s Studio also comes complete with a basic reverb tool.

The enhancements certainly don’t stop there. Within the ELIAS Music Engine, performance has seen a boost. Reading from disk is now much more efficient, meaning that mobile developers can more easily implement adaptive music into their next project.

Bonuses!
ELIAS Studio 2 Pro is available now at a 30% introductory discount.
ELIAS Studio 1.7 will remain available as a free download for a limited time.