In the past 24 hours Sigur Rós have taken over iceland’s national television – and Youtube’s live global streaming – with a 24-hour ‘slow tv’ event set to a constantly evolving soundtrack based around elements of the new song óveður.

The event, named ‘Route One’, is a 1332km journey the whole way round Iceland’s coastal ring road.

What makes Route One interesting for musicians and producers is its extensive use of a fairly recent generative music platform/format, BRONZE.

What is BRONZE?
The format was created in 2011 by Mike Grierson (Goldsmith University’s Computing Department) in collaboration with the musician Gwilym Gold and his producer Lexx, and used for the first time for Gold’s Tender Metal album.

According to an interview with Grierson, BRONZE “is basically a new way of both making and playing back music that allows the finished piece not to have to exist in a ‘static’ form. It puts the music into a constant state of regeneration”.

Wait, if you’re thinking of Brian Eno’s generative music, Koan (or the more recent and brilliant Noatikl) you may be on the wrong path.

According to a 2011 interview with Gold, BRONZE “is been designed as a commercial music format, and so can’t be a software program that creates random mixes songs – it’s not at all random, as this isn’t really what the musicians and producers we work with want”.

Also, it’s worth mentioning that Bronze is a non-interactive format. Unlike other projects (see Bjork’s Biophilia, for instance), BRONZE does not allow the user to ‘play’ with the artist’s music (through games or other interactive methods). With BRONZE the artist is in complete control (relatively speaking). As explained by Gold in another interview, “every sound is subject to a set of laws with a new and unique track being generated in real-time on every playback.”

BRONZE allows the recorded material to be transfigured on playback, producing a unique experience on each listening (we’ve seen something similar recently with ).

BRONZE consists of two main components, a composing tool and a player. The composing tool is still in development. Here you can see a screenshot from the player used for Gold’s Tender Metal album/iOS app. 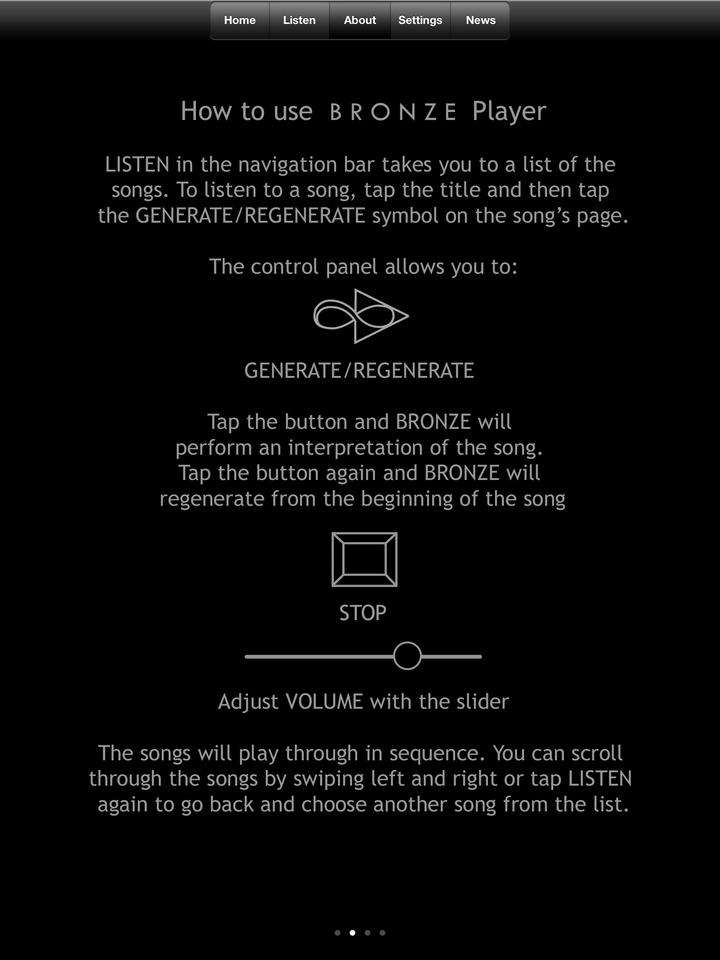 Hopefully, the huge visibility generated by Sigur Ros 24-hour slow-tv event will also benefit BRONZE‘s development. We’ll keep an eye on this platform and we’ll hopefully have a chance to test its composing tool soon.