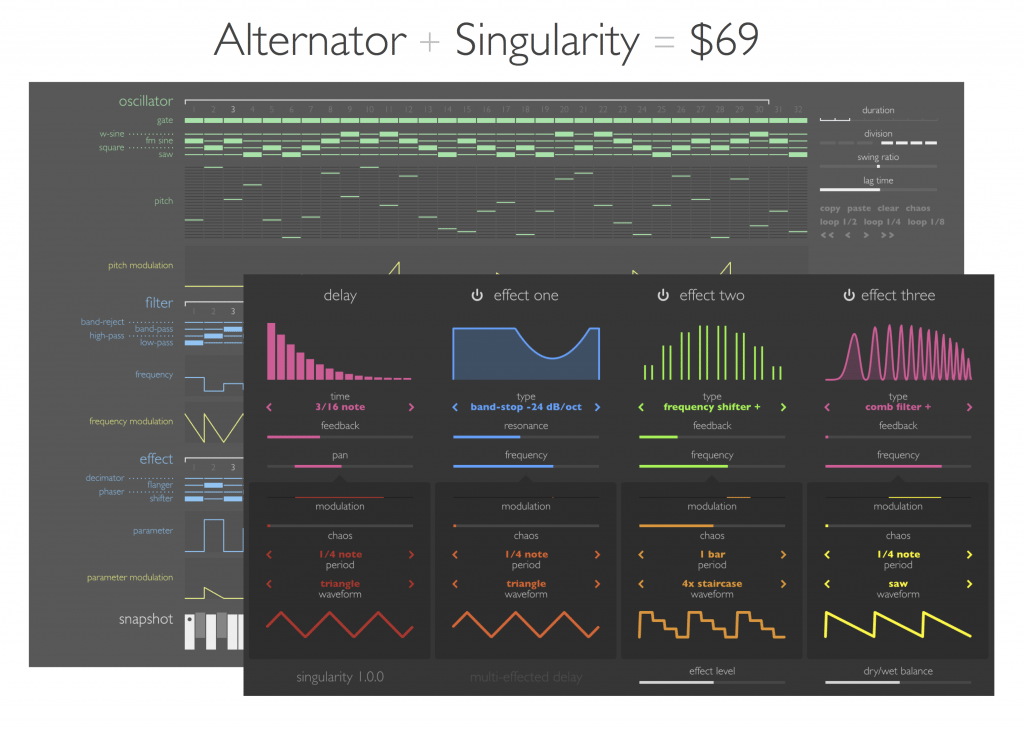 Sinevibes has got in touch with us to announce an interesting special offer for two of its Audio Unit plugins: until the end of June 2016, you can get a free copy of its Singularity multi-effected delay if you purchase the company’s new Alternator motion synthesizer, priced at $69.

According to the developer, “the two plugins suit each other extremely well, one providing intricately animated synth and bass lines, while another adding unique delay and reverb effects.”

At ANR we like developers like Sinevibes (see also our Sinevibes Switch, Shift and Sequential review), offering a consistent catalog of quality products with a modern, attractive and no-nonsense design.
After all, there are already enough analog emulations around, right?…

Alternator and Singularity in detail
Alternator is a monophonic synthesizer with a unique approach to sound creation – every single parameter of its engine is sequenced.

It consists of three modules – an oscillator, going into a filter, and then into an effect – but they all have their own separate step sequencers which change every property of the patch in a rhythmical fashion: oscillator waveform and pitch, modulation envelopes, even filter and effect types.

Each of Alternator’s sequencer has its own timing, looping and randomization features, making it unusually easy to create motion lead and bass sounds with almost never-repeating patterns

Singularity is a delay effect unlike any other. It starts with a tempo-synchronised feedback delay line capable of true stereo panning, and its tail is then sent to three extremely capable effect units connected in series.

Each of these processors includes a rich selection of different algorithms: from filters, phasers and choruses to digital- and analog-style distortion, frequency shifter and granulator.

In addition to all this, Singularity has four modulation generators for parameter animation – all of which lets you create sophisticated, out-of-this-world delay, echo and even reverb effects.

Pricing and availability:
Alternator and Singularity can be purchased together for $69 until the end of June 2016. The plugins work with any Audio Unit host software running on macOS 10.6.8 or later.