Psychic Modulation is the brainchild of Jack Resweber, a New Orleans-based producer, artist and designer. The company creates VST and Audio Unit plugin synthesizers, drum machines and effects for Mac and Windows DAWs.

Psychic Modulation plugins are geared towards the experimental electronic musician or anyone who wants something out of the ordinary to use in their music.

Phonec 2 is a 32/64 bit VST and Audio Units plugin and the successor to the original Phonec synthesizer, which in Jack’s words “was inspired by the mystique of video logos you hear at the beginning of worn out VHS tapes”.

In use
Phonec 2 does exactly what it set out to do, with obvious nods to the BOC camp, right down to the hexagon in the patch browser section. This instrument, however, isn’t purely a style emulator like some of the sample packs and whatnot on the market. Phonec 2 is an ode to the brethren of nostalgia- a tool for the brotherhood, if you will.

Immediately I was surprised by how rich this synthesizer sounds, even double checking to make sure my Nord, which I was using as a controller, was turned down. The moment I touched the keys and sound emitted from Phonec I found myself wanting to write melodies and work on new tracks. PsychicModulation really tapped into a creative plane when putting this synth together.

Phonec 2 is dripping with mojo and the GUI is well laid out and intuitive. I was quickly able to make use of the different features, one of which I think deserves particular attention is the “melt” knob.

The Melt knob has two modes, circuit and tape. Melt pretty much dictates how much of that stretchy worn tape feel your patch has. Less is more with this feature in my opinion.

The Echoshifter is another noteworthy feature. With its shift and phase knobs you’re able to hone in on the effected tone and character of the patch just a bit more. Again less is more to me because those subtle flaws and minute changes add to the vibe and realness of a sound; your brain notices it but it’s not like “Hey, check out how jacked up and out of tune my synth is.”

The rest of the features are pretty much standard without overdoing it, you’re still able to quickly assess Phonec 2 without being overwhelmed by too many controls.
Two oscillators and a sub oscillator a mixer section (with noise option). Modulation section as well as a modulation sequencer and an arpeggiator, filter section, amp and master.

What makes it special
Now to me what makes this instrument so special is the designer Jack Resweber. After poking around the company’s website I followed some links to his other work and after eventually corresponding with the creator himself, I quickly realized Phonec was designed for his own personal use.

According to Jack, “I always create a plugin with the intention of using it, and Phonec is definitely a go-to synth for me. I consider it my ideal synth, and I use it a lot in my music, right alongside my hardware analog synths.”

For me, this makes an instrument that much more desirable, as I feel like someone is sharing their creative process and a bit of their inspiration and insight and in doing so I feel like I’m able to get more out of the instrument (the Bob Moog effect).

You can feel it and hear it in Phonec, there’s a piece of Jack’s process and flow in the instrument.
Phonec 2 doesn’t feel like it was designed with just the intent of making money or emulating a process or sound. Phonec feels like a part of someone’s kit.

This becomes more apparent when you listen to Jack’s electronic project Phonogeist (phonogeist.com). Visit the site and his various social media feeds- the aesthetic and overall vibe is there. He is the real deal: a designer creating tools to further his own explorations and sharing with us his tools. 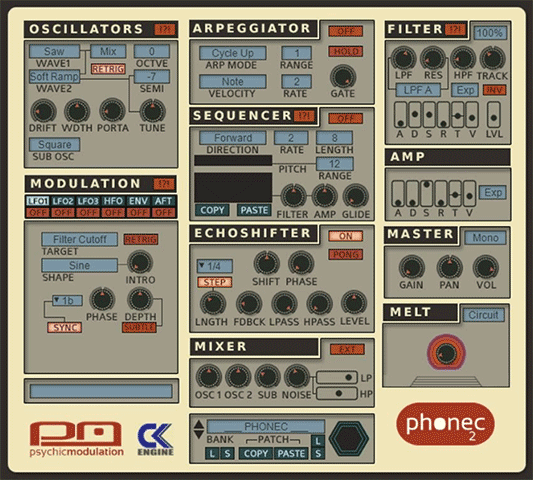   
A bit deeper
Phonogeist has been an ongoing music project of Jack’s for some time now. He is currently in the process of finishing his third Phonogeist album (titled ‘Postmodern Sunsets’) which will be available in a limited run on cassette. The tracks on this album span the last 5+ years and are densely layered, with Phonec weaving in throughout.
Jack started Psychic Modulation around 2003. Many of his older plugins were mostly experimental synthesizers and effects made with Synthedit.

For Phonec 2 Jack hired a programmer to code it as a VST and AU plugin for Mac and PC 64- bit.
Phonec 2 is at present the only plugin Psychicmodulation has built that is cross-platform, and is the main focus PM’s efforts.

Phonec 2 currently has a big update in the works with several improvements and some very interesting new features. Psychicmodulation is pushing for the update within the next month or so.

Conclusion
In closing, I’d say Phonec 2 has a found a place in my tool chest and I’m anxiously awaiting future updates and features. It’s a great sounding synth that’s easy to use and get familiar with.

It definitely has its strong points genre wise but used creatively I think it could add to a lot of other styles, especially in an accented manner.