Many of the modules can be uploaded and used directly as a plugin within most DAW’s. For those that don’t, there’s a ‘connect’ plugin, that transfers audio between DAW and standalone RX 5 fairly seamlessly. It’s useful, as it speeds up the process, being able to shuttle between the two software quickly.

In the case of the plugins, as the audio processing tends towards being CPU intensive, I would prefer just to export, render in standalone mode, then re-import. Audio treatment is probably not something that you’re going to want to keep un-rendered, in case I should change my mind about how it sits in a mix. I just want the audio treated, and then I can crack on with mixing. So I would tend to render work that I did with RX 5, and move on. Still, it’s useful to have plugins if you want them! 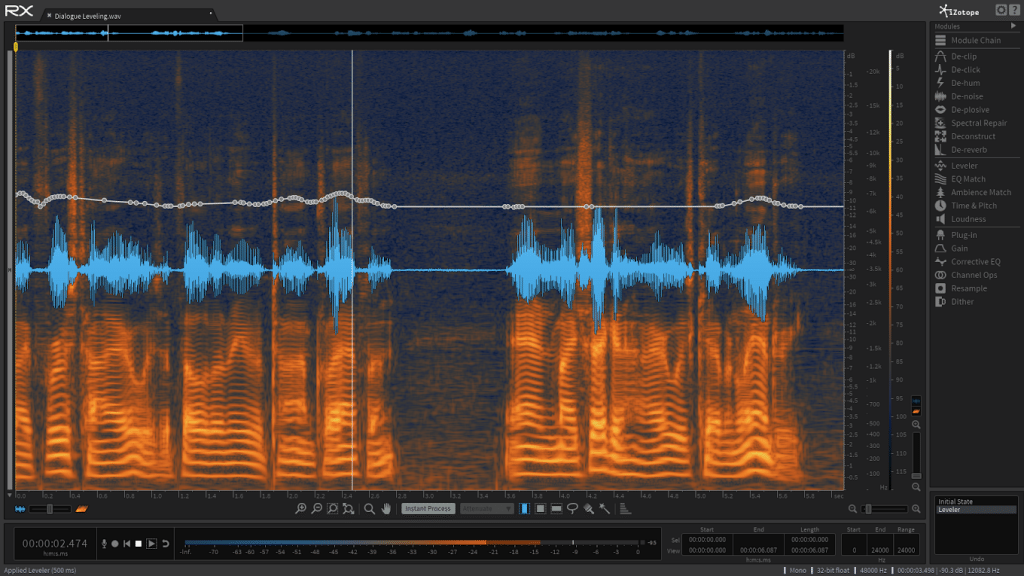 Loading audio into RX is as simple as click and drag, or ‘open’ from the file menu. The file instantly shows up as a large yellow and orange spectrogram, or a blue waveform. The frame of reference for working with audio is to think of it as a photo editing software – you select a particular tool to highlight an area of audio to operate on – by using a brush, lasso, magic select, or shape select tool. There’s also a harmonic tool that helps select the fundamental and further harmonics when selecting tonal material. In the middle is a new ‘instant process’ tool, which we’ll cover later.

All the modules contain 4 or 5 sliders that deal with the sensitivity and strength of the algorithm being used and other relevant parameters to that module. For all of the modules, you can load, create and save presets, if there’s a particular function you use often. There’s a preview button so you can preview the results before you print them to audio. Here’s a list of all the Modules, with a quick description, and how I have found them useful so far.