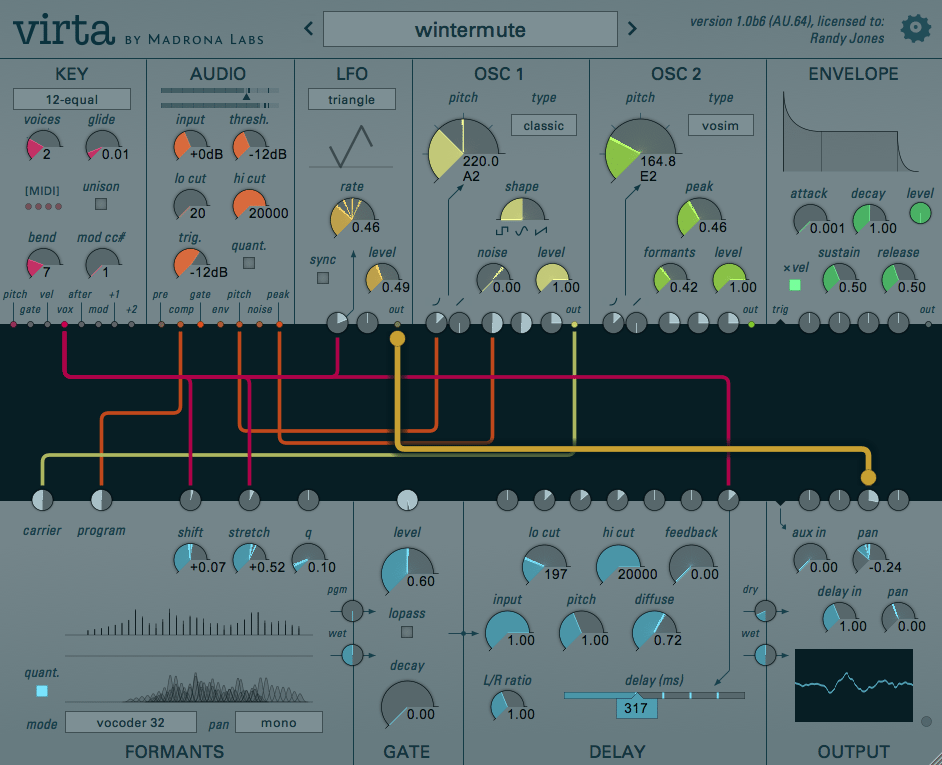 The idea for the new Madrona Labs synth/effect processor, Virta, first came about after a conversation about how to make expressiveness and dynamics more immediate when it cames to synthesis and performance. And the result of that conversation is here in software form, for us to explore.

Virta is based on the same system as their first instrument, Aalto: it’s a modular synthesizer and effects processor. It has a twist however, in that it’s designed to work primarily with external audio, and especially your voice.

Signal Flow
Virta’s GUI is laid out almost exactly like the modular Aalto. The audio and midi signal enters in and is combined with two oscillators at the top of the GUI, and most of the processing is laid out in the bottom section, aside from LFO and envelope. The two sections are joined together in the patcher section, where you draw connections between the different modules, simply by click and dragging from one connection to another.

Once you route audio into Virta, an analysis algorithm extracts several useful information streams from the signal, including the pitch, envelope, peak, noise, and gate. Those signals then control almost any element of Virta. I’d not come across some of these information signals before, such as peak, which measures the relative brightness of the signal, effectively tracking the highest centre of the frequency of the sound. But overall it gives a lot of information you can feed to sources. This is the real beauty of Virta. It’s designed so the audio input gives as many control streams to affect the sound as possible. With 7 different signals emanating from the audio input, there is a LOT of possibility! Fancy controlling the delay feedback with the pitch of your voice? Now you can!

Here’s Virta on some vocals. Not mine!

The modulation and processing modules are: LFO, Envelope, Formant, Gate, Delay and Output – mostly standard fare, however, it’s modular, which immediately adds a huge extra flexible dimension to the synth.

The formant acts like a vocoder. with differing modes of multi-band filtering, where you can get your classic 8-band vocoder sounds, through to much more thick 256-band vocoder. I loved this vocoder filter. Open up the q filter – which widens the input of the bands, and the sounds from a vocal were very lush and thick. I also really liked the quantize button, which quantizes pitches to the key pattern you’ve selected.
The gate module changes either the level, or the low-frequency cutoff of the source audio.

If you feel hear some resemblance to certain sonic qualities of the KORG MS20 pitch tracker and the Lexicon LXP15 in Pitch / Delay mode, your ears are not lying to you. Randy Jones, the man behind Virta, spent many hours analyzing these classic units!

The output module is a mixer of sorts. It allows mixing and panning of the various incoming signals, and includes an Aux input, which is essentially another signal that you can create from the synth pathways, and mix into the original signal.

Conclusion
You can set Virta up as a basic vocoder. You’re not really using it to its full potential if that’s all you do, however. It’s a combination of vocoder and modular synth, and as such, the sounds created reflect that to more or less effect. There is no ceiling on the crazy sounds that can be brought about with a few patches. Virta was designed for immediacy of expression, trying to break away from knob twiddling and getting deep into parameters at the expense of using time creatively.
I felt like Virta didn’t really solve that issue – that is going to be an eternal search for musicians dealing with musical interfaces, be it modular synths, or piano keyboards. But it did come up with a novel way of shaping sound. You still have to do knob twiddling, and patching, but you can eventually leave that alone, and get creative with audio input, most effectively a live input, and shape the sound that way.

Virta is of the same calibre as the other two instruments dreamed up at Madrona labs, Aalto and Kaivo. And aside from the similar heavy usage of CPU, there is nothing but creative things to be brought about with this instrument (plus the price makes it almost a no-brainer!). Last but not least, make sure to check out the manual, it’s simply brilliant!

Price and compatibility
Virta costs $89, and a demo version is available. The plugin supports VST/AU formats. Mac and Windows versions are fully 32- and 64-bit compatible.

You can read more and buy Virta on the Madrona Labs website.