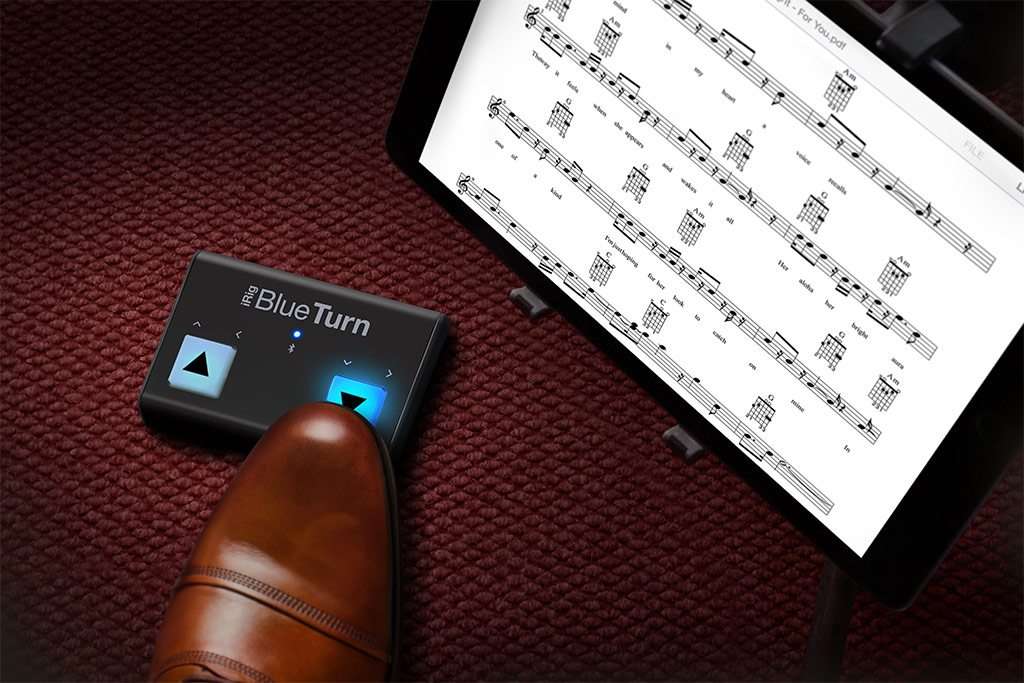 A few months ago I was talking to an experienced keyboard player, just before his gig. He had recently switched from a laptop to an iPad (as sound module and set list management) but he was still looking for an easy to use, reliable page turning foot pedal. Well, I hope he’s reading this post, since the IK Multimedia iRig BlueTurn is all he needed and then some.

iRig BlueTurn is a hands-free page turning foot pedal that features two backlit buttons, making it an ideal companion on the stage. Think of it as a compact and simpler version (Bluetooth only, no MIDI) of the well-known iRig BlueBoard pedalboard.

How does it work?
iRig BlueTurn can be used with the free IK Multimedia app iKlip Stage or any other setlist manager or document viewer (on iOS, Android and Mac OS X) to turn pages in sheet music, scroll through tablature, swap slides during a presentation and more. The device supports the following file types: PDF, TXT, PNG, JPG, TIFF, RTF and BMP.

The setup is straightforward: just turn the device on (2 AAA batteries are included – the unit operates on BlueTooth LE so expect long battery life!), pair it and let iKlip Stage recognize it.

iRig BlueTurn’s two buttons can be used in three different modes: Page Up/Page Down for page navigation, Arrow Up/Arrow Down for scrolling line by line and Arrow Left/Arrow Right for page turning.

In use
I tested the iRig BlueTurn in low-light conditions, like those you would experience on stage. The soft blue glow does the job (without distracting the user), and the space between the two buttons is large enough to avoid any issue. The buttons and the whole hard plastic case feel sturdy, and the unit is so compact that you could probably carry it in your pockets.

I enjoyed the ‘no-frills’ approach of iRig BlueTurn: it works out of the box, without specific software adjustments. Being a modern Bluetooth device, it also makes the most of the latest Bluetooth standard that allows for longer battery life (make sure to turn the device off when not in use, though!). Last but not least, the buttons are silent (you don’t want to hear loud clicks during a quiet performance!).

The iKlip Stage app follows the same no-frills concept: the App Store offers more complex document viewer apps, but for my needs iKlip Stage does the job. I wish it would integrate with cloud services like Dropbox, but I’ve easily been able to export documents from other apps to iKlip Stage (just use Open in iKlip Stage or Copy).

If you skip the included Quickstart Manual (like I did, at first!), you may experience a little issue with the on-screen keyboard after pairing the iRig BlueTurn with your iOS device. Basically, the pedal ‘disables’ the virtual keyboard. If you need to type, you will have to press and hold the left button on the pedal for a few seconds for the keyboard to reappear. This is common to other similar pedals, so I assume it’s an iOS issue.

Page Turning Bundle
iRig BlueTurn can also be used with iKlip Xpand as a part of a full stage-ready setlist management and page turning system. iKlip Xpand is a microphone stand mount for tablets with four expandable grips, a rubberised backing and a positionable ball joint design. It can be used to secure an iPad or Android tablet for use while performing with iRig BlueTurn.

If you’re interested in both these items, IK Multimedia offers now a Tablet Page Turning Bundle featuring iKlip Xpand and iRig BlueTurn. I love the iKlip accessory series (I own the iKlip Studio and the iKlip Xpand Stand), so this bundle gets my (obvious) recommendation. 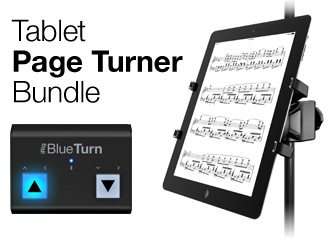 Conclusion
Gigging musicians, keynote speakers and live artists need to focus only on one thing: their performance. Tools like iRig BlueTurn make it easy, providing a reliable, no-frills option at an affordable price. Coupled with the iKlip Xpand (in the Page Turning Bundle) and the straightforward iKlip Stage app, this compact Bluetooth device is a no-brainer if you need a page turning foot pedal. I only wish I had an iPad and iRig BlueTurn long ago when I started playing live!

The product is NOT compatible with iPad 1 and 2. It supports all Mac models from June 2012. It is also compatible with most Android smartphones and tablets that support Bluetooth 4.0 / Bluetooth Low Energy. Android 4.3 or later is required.

Note: the iKlip Stage app is free with 30 files and 2 setlists included. Register your iKlip serial number to increase capacity to 60 files and 4 setlists. If you’re touring with Springsteen or The Cure, you may need to get the unlimited scores and setlists upgrade, available via in-app purchase.

Where to buy?
Support ANR buying the iRig BlueTurn through one of our partners. That’s the best way to attract good karma!