Right out of the gate this instrument is easy to use. Other than a few not so obvious features like the key commands and the key switches, almost everything is right there and pretty self-explanatory. Again, like Orbit this very tamable beast is packed with great features that will allow you to recycle sounds in different ways keeping them fresh and inspiring anytime you come back to them.

I always like to toggle the info bar on when possible with a new piece of kit that way when hovering everything is spelled out right there at the bottom. This is useful for me as the logical section of my brain says ‘dude read the manual first and then start using this instrument’, but the creative impatient section of my brain says ‘forget that, just start poking around, this looks cool.’ (also, Eclipse was a very quick download and painless install, with easy instructions).
If you’re familiar with Wide Blue Sounds previous instrument Orbit, then this will be simple to get around in. It comes with an almost identical layout and style of interface, just darker weirder sounds.

The first thought that came to mind when I started going through the preset sounds was The series American Horror Story. Which is a good thing, the music and sound design for that series is top notch as far as creepy dark composition goes.

I noticed the sounds were great played as a single note mainly due to all the stuff going on between the engine modes and the sequencing features. Chords tend to muck things up with some of the more detailed sequencing patches.
This is not a bad thing by any means, Eclipse to me feels like it would be a go to for sounds and tones that really carry you in between the more traditional songs you hear in film and television.
Good for creating mood and energy without saying hey focus on this music that’s playing. Maybe more like the soundtrack that’s playing in your mind rather than a familiar song. All that sound you don’t realize is happening. 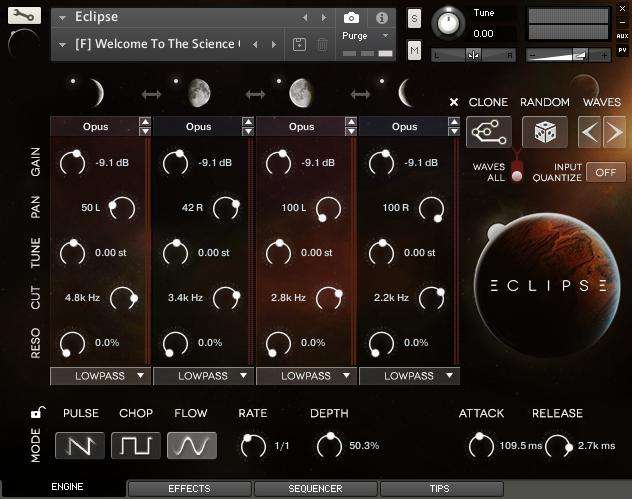 Composing With Eclipse
I started writing two different styles of music with the Eclipse to actually see how it plays out in real world use beyond just getting familiar with it. The first track was a minimal techno track within Logic Pro. I used Eclipse for the two primary sounds; one was a distorted thinned out bass sound with a ton of motion going on in the sequence section of Eclipse and the other was a bit more of a background melody also loaded down with effects and sequencing from within Eclipse. I found Eclipse very easy to use inside of Logic and was very inspired by the sequencing section as far as actually designing a sound. I was able to quickly put together interesting sounds with a lot going on before I even really started using the sequencer within Logic. This sped up my workflow tremendously.

The second track I started was for a one minute trailer for a indie horror film one of my colleagues is editing. Within two hours I had a fitting rough draft to send over to the director. I used 4 instances of Eclipse for this, the only other instrument I needed was the Ultra beat within Logic Pro for light drum sequencing. I didn’t have to do much to the stock sounds for this piece other than adjust some levels within the engine section.

What you have, in a nutshell
A sizable collection of presets (or starting point patches) organized under Chop, Flow, FX, Pulse with descriptive names. From there you have your four sound engines. “Each of the four channels gives you access to one of the 69 long-form sound sources via a pop-up menu at the top. To help you zero in on a particular style of end-result, the sounds are organized by general mood and feel: Simple, Complex, or more extremely, Asylum. The sound in each channel can be individually sculpted with GAIN, TUNE, PAN, and FILTER. When triggering a note or chord, the channels play sequentially, crossfading and switching based on the mode selected”.

From here we move along to the effects page. Six very usable effects that pretty much eliminate the need for additional CPU hungry plugins on this instruments channel other than maybe a nice compressor.

Additional note from the manual concerning the effects page: “Any parameter on the Effects Page can be controlled via MIDI. Ctrl-Click (Mac) / right-click on the desired control and then send a MIDI control change message. That parameter can now be controlled and automated.” 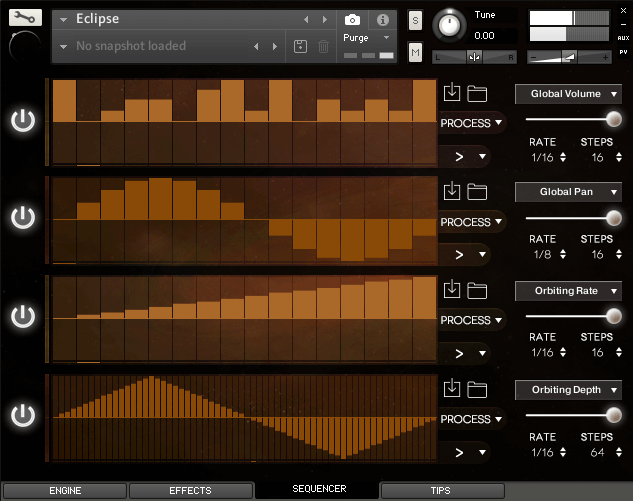 Next, we move along to the sequencer page, four individual step sequencers which are capable of manipulating and providing additional motion to almost any parameter in Eclipse. With rate and step control as well. This to me is where a lot of this instrument’s power and usefulness come into play. These four sequencers are what help cut down on editing and bring the sort of organic life to these sounds. The sequencers used in conjunction with the key switches are what take a cool sound and make it follow movement in the video realm with relative ease. This would also be very useful for creating more rhythmic sounds to slip in and out of drums without the monstrous task of step editing in the more traditional since.

Conclusion
This is a very limited overview to give you an idea of what this instrument is capable of without diving into every detail of control available. The manual is a very quick 11-page read that sums up everything you need to know in a very easy to understand layout. Nothing overly technical about this instrument. I would recommend this to anyone scoring film or television especially darker moodier styles where background is key. I could also see this being used in Industrial and darker electro genres. Trip-hop and the Glitchier realm could also make use of Eclipse.

With that said I don’t want to pigeon-hole this instrument, it is very useful far beyond what I’ve just mentioned. Eclipse is one of the first tools I’d go to now when working within any of those genres.

Overall I really liked working with Eclipse, it was easy to use and offered me a fresh and inspiring sound base to start tracks with. I could also see myself sitting with Eclipse and really spending some time designing really interesting detailed sounds of my own and being able to come back and recycle them over and over without getting stale.

Price and compatibility
ECLIPSE costs $149. Those wishing to purchase ORBIT and ECLIPSE together can do so for a special bundle price of $299.
Wide Blue Sound products are powered by Kontakt or free Kontakt Player 5.5.1+. For further details, please visit WideBlueSound’s website.

Written by Henry McMinn
He’s been writing and producing electronic music in some form or fashion since 1995 and running his own studio since 2005. Check out the latest electronic offerings from his WeatherPeople project.