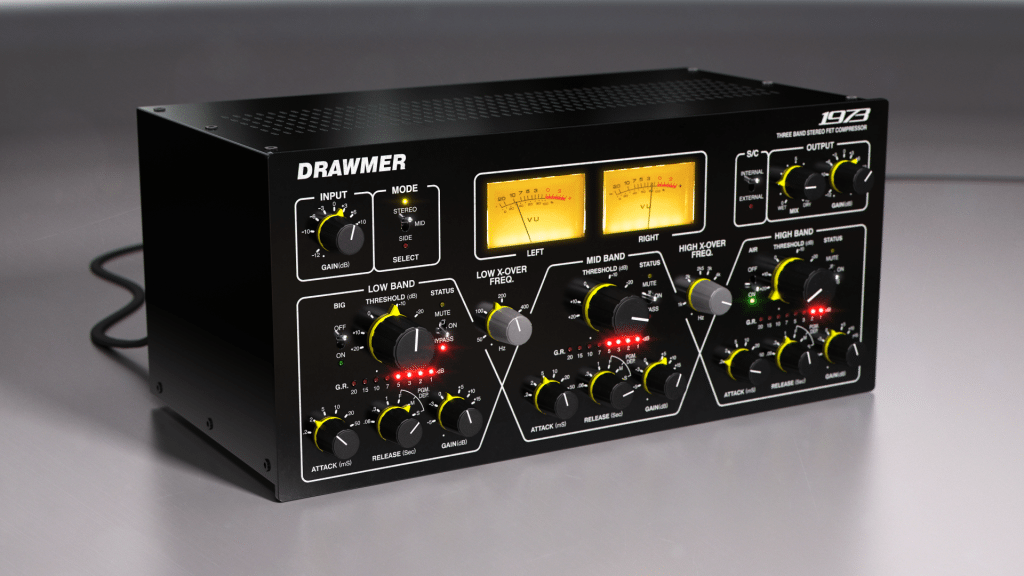 The Softube Drawmer 1973 Multi-Band Compressor is a software version (VST/AU/AAX) of the original Drawmer 1973 hardware, created in collaboration with the Drawmer research and development team, and approved by Ivor Drawmer himself.

Just another emulation sensation or something to be taken seriously?
This three band stereo FET compressor emulation was brought into my mix arsenal with some skepticism. It feels like every month a company is debuting a new emulation of something from years past.

Maybe soon we’ll start seeing makers emulating the original Logic compressor or the reinterpretation of the Pro Tools version one stock EQ, exciting right? Wait didn’t those guys emulate themselves already? My point being it’s hard to compare and make accurate assessments of these emulated plug ins unless you have thousands upon thousands of dollars worth of hardware (or maybe in the not so far off recycled future loads of dusty software) at your disposal to run the tests yourself.

So I rather than recite the specs at you put this wicked little box to the test on a post rock album I’ve been mixing, knowing it’s true colors would show through quickly on this type of mix material. One way to put a compressor to the test is to see if it can push a vocal out of a wall of textured guitars and synths without screaming over the top of the mix. It did just that with relative ease.

Just a quick glimpse into my workflow, I’ve used a lot of plug ins over the years and have come to the realization that less is more and sometimes simpler is better. I’ve whittled my collection down to a few makers that deliver the results I like. I’ve found my workflow increased drastically once I found a few that do what I need. With this test drive of Softubes emulation of the Drawmer 1973 I’m looking their way with a lot more interest. This piece of kit will inevitably make it’s way into many of my mixes. 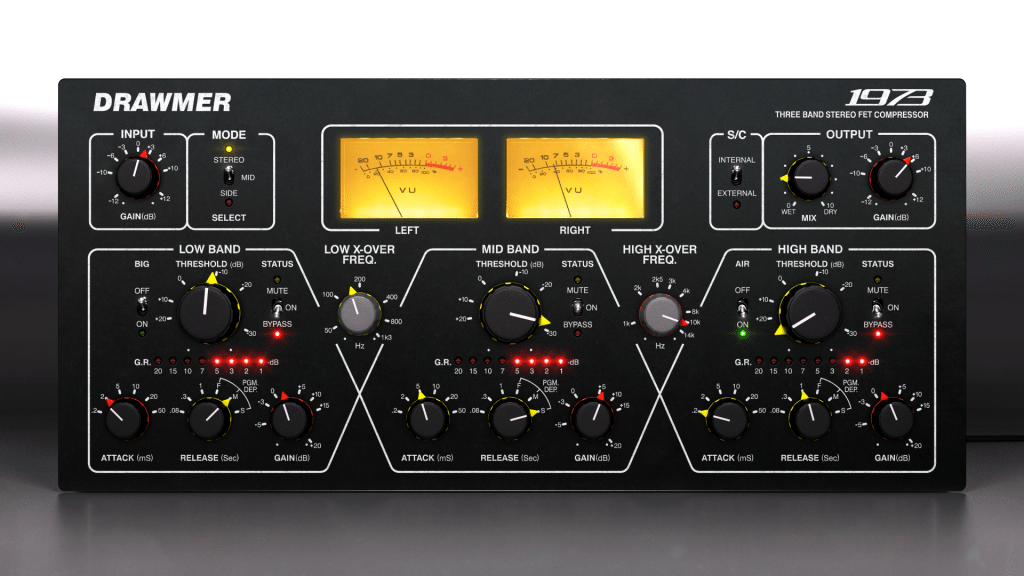 First glance
The initial opening was a bit of a visual overload due to all the small text covering most of the unit. That was quickly gone after running some signal through it and grabbing the controls it all started fitting into place rather quickly.

All controls being essentially the same across the three bands other than the “BIG” toggle on the low band and the “AIR” toggle on the high band. This helps bring everything together after the initial wow factor of opening it and seeing all the labeling staring back at you.

One thing I found that made the workflow a bit simpler and quicker was the universal control display that stays hidden at the bottom left of the unit near the Softube branding when nothing is being touched. It shows exactly whats going with whatever you’re touching and adjusting and then quickly disappears after you’re finished. This allows the unit to keep it’s cool vintage vibe without a bunch of digital text changing all over the plug in.

The controls are all user friendly and very streamlined, a toggle for the mode between mid, side and stereo. I used mainly stereo mode for most of what I tested, I’ve never been overly quick to use mid side compression for my mix flow.

Standout features
Two of my favorite features once I was comfortable with Softube Drawmer 1973 were the BIG and AIR toggles on the low and high bands respectively. I put this unit on individual tracks and on busses, and found this feature to be especially useful on my guitar and drum compression busses. The BIG toggle gave my drum bus some punch with a nice glue rather than a total focus being on the kick. It was very warm and subtle but still very noticeable, if that makes sense.

I pretty much toggled the AIR to the on position with everything I put the Drawmer on. It gave subtle high end detail to my guitars and some space and a bit of resonance to the vocals, coupling this feature with the X-over frequency for the low and high and you have a lot of control yet simple and streamlined without getting lost in a tweaker vortex.

Conclusion – My new go to compressor in the box!
I coupled it with the Solid State Logic Channel strip on multiple instruments bypassing the SSLs dynamics and only using the EQ along side the Drawmer 1973  with overwhelming great results. Overall it’s pleasing to look at and powerfully simple to use once you’re familiarized with it’s GUI. Cool factor 10, function and usability 9.

I’ve primarily tested this mixing a post rock album over a weeks worth of mixing, lots of guitars, drums and vocals. I feel this could probably function great in some of my personal electronic production especially on beats and busses used for compression. With that said I can’t think of anything I wouldn’t try it on.