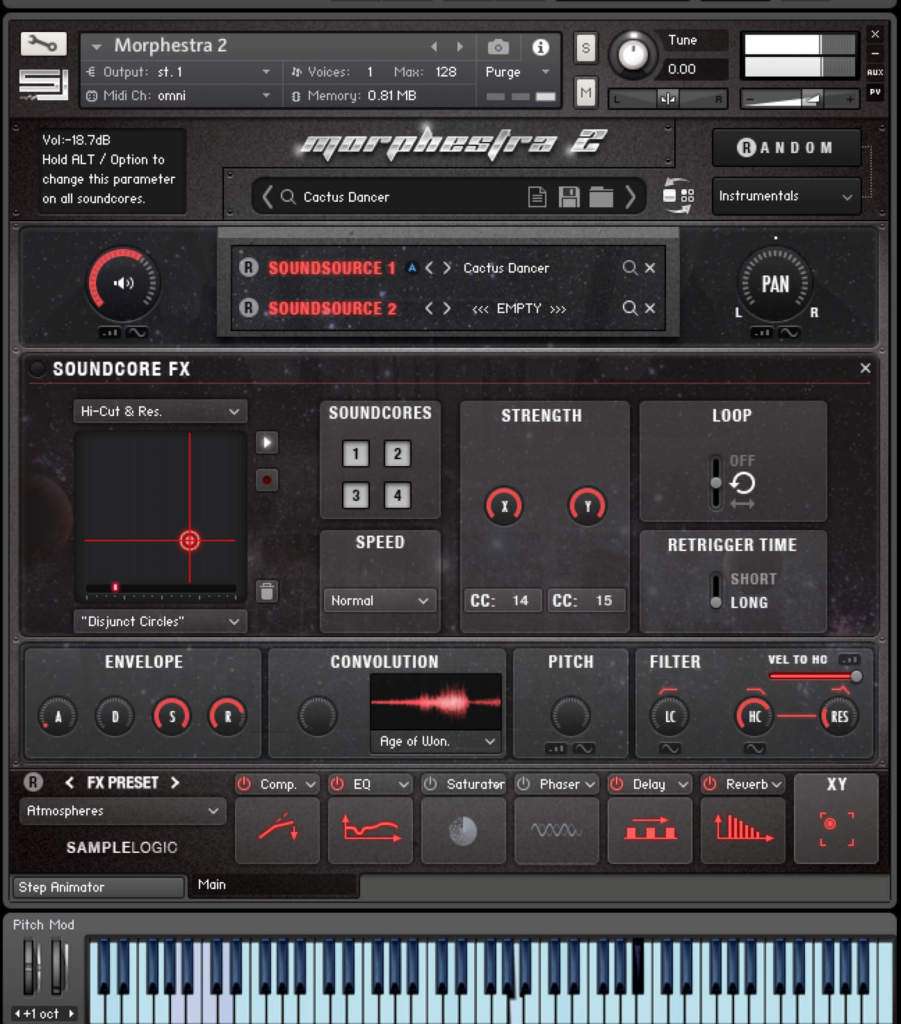 UPDATE: Morphestra 2 has been relaunched with a new price, check out the updated Morphestra 2.

Sample Logic are continuing their trend of making very large sample libraries that blur boundaries between digital and analog, music and sound design.

Morphestra 2 is based on orchestral sounds, and the predominant amount of their samples are classical instruments that have been morphed, manipulated, and chopped into varying degrees of recognisable sounds. The library is designed for the film, tv and video game composer. 25GB of sampled content gives you a whole world of sound to sculpt the atmosphere you’re looking for, from tension, to romance, to aggressive battle. Although the sound sources are mostly orchestral, there are some field recordings of more unusual sources. Fancy morphing a sustained orchestra with a drill? You can do it in Morphestra 2.

Morphestra 2 is set up in an identical fashion to CinemorphX, so I won’t delve too much into the detail of the setup – read our CinemorphX review for exactly how the libraries are laid out in Kontakt. But: quick recap; you can play Morphestra 2 as a single layered instrument, or as a multi. With the multi, there are 4 ‘cores’, or layers, that you can load your initial sounds into from the selection of instruments, or you can select a preset multi from the library, which already has 4 sounds layered together. From there, there is a myriad of ways to manipulate the sonic blend of the four layers, either by continually morphing between them, or mixing the layers statically. The amount of modulation you can achieve on each source sound is simply staggering, with LFO’s, step sequencers, arpeggiators, effects, randomization, automation for each layer, then on top of that, a further sequencing page enables you to set up a step sequence, and modify the velocity, duration, length, direction, pan, stutter, transposition on the sound as a whole, then on top of that, a level of FX per instrument, AND for the multi as a whole. If you want to make a big stinking sonic mess, it definitely wouldn’t be hard with all the options available to you here!

Presets
Once again, there are thousands of presets (5000+ according to the website. I didn’t count!). Just the fact that this following preset demo video is 13 minutes long and barely scratches the surface is a clue to the immense library contained in Morphestra 2

The sounds
There are five sound types:

They all contain subcategories, which I think are not specific enough to narrow down from 5000+ presets to find the sound you want. I ranted about this in the last review, and I definitely think it’s something Sample Logic could improve on.

Personally, I love the atmospheres category. I’m not sure there’s a library out there that can provide atmospheres that sound anywhere near this quality. The depth and movement of the sounds just beggar belief. I think this is really where the strength of Morphestra 2 (and quite a lot of SampleLogic’s catalogue) really shines. The sounds can be more static and pad-like, with a hint of someone singing right in the background, or aggressive arpeggiated cacophony, creating tension with a button press. They are all evocative and bring an immediate emotion to the music. They tend to catch the ear also, as you can hear sounds you recognise the source of, but then they melt away into something more alien, and grab your attention.

In Morphestra 2 I enjoyed the instrumentals also. There’s a wide variety of sounds. I would hesitate to recommend Morphestra 2 on it’s authentic sounding classical instruments. There are many libraries out there that do stringed orchestral instruments a lot better. However, that’s not what Morphestra 2’s about, and the otherworldly element of warped, muted, ambient soundscapes that come from the source sound of strings are just fantastic. As are the keyboard sounds, sourced from pianos, clavis, Rhodes, bells etc. There’s such a large amount of very playable instruments that you can’t quite place the original sound from.

To me, the percussives and loops demonstrate best the blend of organic and electronic sound that Sample Logic gravitate towards. You can hear hints of recorded big orchestral drums, and also definite electronic elements. Then it sort of gets a bit blurry defining where one starts and stops. There are impacts and hits, and again it’s like a blend of smacked percussion, with synthetic tails, or synth swells behind it. The sounds all seem to complement each other really well.

Legacy
As they’ve done with previous libraries, Sample Logic have included the entire original Morphestra library alongside the new one, so if you’re new to sample logic libraries, you’re really getting your money’s worth!

Conclusion
For writing music to picture, chances are Morphestra 2 will add tools that you don’t have, and it will pay for itself very quickly. If you’re writing trailers, you’d be a fool not to own this (and probably all the rest of SampleLogic’s library!). Go buy!

Price and compatibility
$499 – if you own the original Morphestra, you can crossgrade for a discount. Requires Kontakt 5 Player (free) or Kontakt Retail (sold separately) Version 5.5 or higher.

Where to buy?
Support ANR buying Morphestra 2 using the button below. That’s the best way to attract good karma!