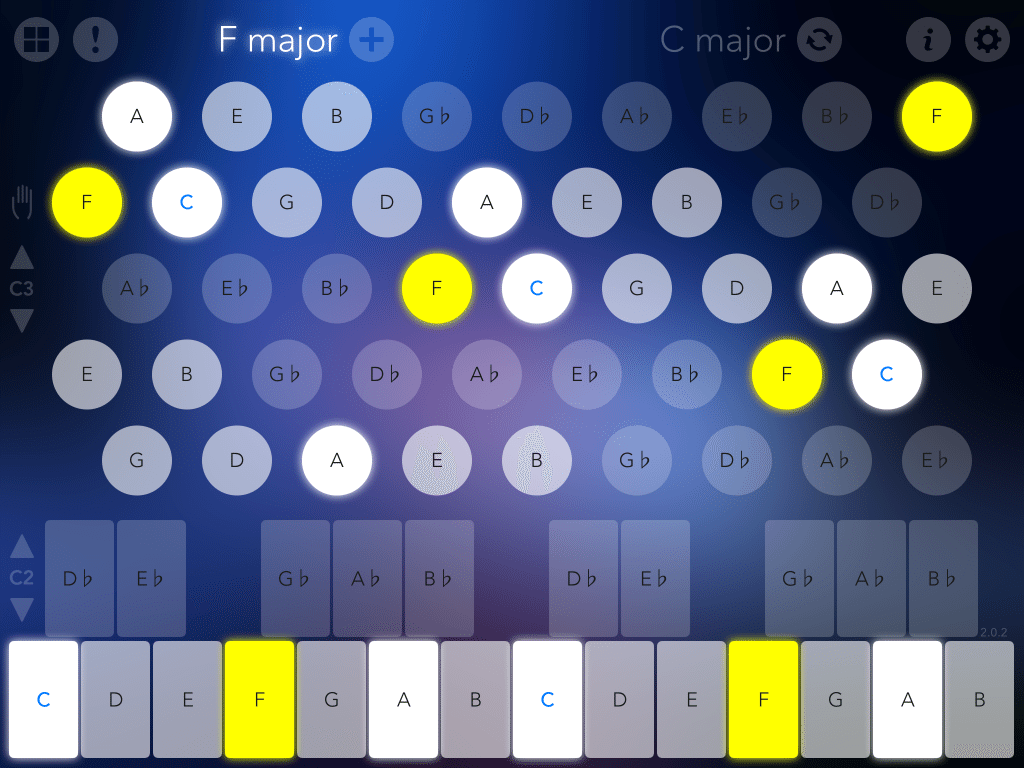 Navigation
Finding one’s way in the vast ocean of sound can be daunting. Sound waves move our eardrums and our souls alike. The oceans themselves, can be calming, smooth and wonderous. They may also be rough and harsh. They have much in common with sound. Some notes can make our hearts melt, while others make the hairs on our necks stand to attention. To navigate this ocean of sound, those who came before us have mapped out some structure. Sound become notes; notes become chords and finally a structured piece of music may emerge.

Chords are defined as three or more notes sounding simultaneously, but not necessarily played at the exact same time. They usually have a harmonic relationship to each other. Triads are the most common, consisting of three notes (root note and two others – third and fifth interval above the root) and while we have the common keyboards chromatic scale to help us navigate these notes and chords, some (like myself) are glad of little help.

Navichord is the compass designed to assist us mere landlubbers navigate these sometimes perilous waters. 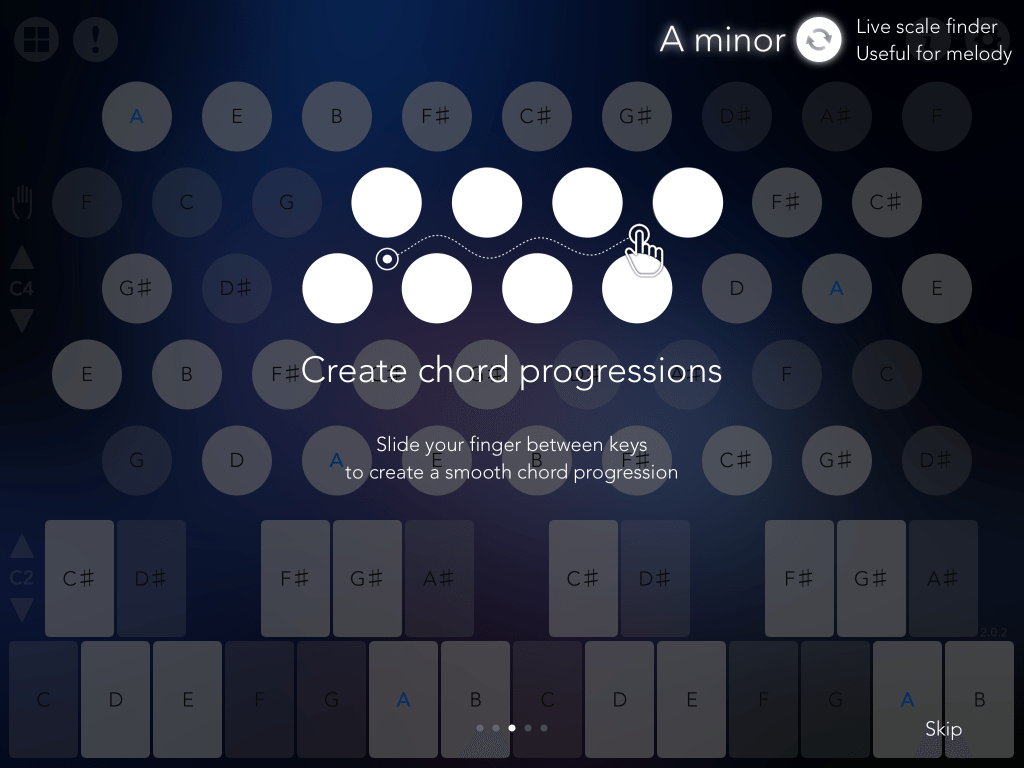 A compass that leads to that which we most desire.
On its most basic level, Navichord delivers the means to play chords with ease. Triads can be played by a single finger touch in the space between three notes on the triangular chord grid – simple. Major seven chords can be played with two fingers close together. Suspended, Augmented and Diminished chords can all be played by three fingers in a row. Indeed, it is amazing how quickly you can memorise the simple patterns that will make up chord progressions. As shown in the picture above, even a simple wiggly line traced with one finger can create a simple chord progression that would require far more dexterity on a regular keyboard.

The main screen is split into two input methods, the triangular chord grid with a regular keyboard arrangement below. When played, the notes in each chord are highlighted and the root note is shown in yellow. Each chord name is shown above left. The keyboard input will also show the notes being played by the chords above. This helps in many ways, not least helping actually learning where chords appear on a regular keyboard. Highlight the live scale finder top right and the keyboard will show a scale based on the chord you play on the triangular scale – very clever and extremely helpful.

Separate octave buttons can be found for both of the input methods and the triangular scale also has a handy hold button. Further scales can be chosen from the drop down menu with root note selectable. All very simple and quick to access, yet why not simplify things further? Welcome to programmable chord pads. 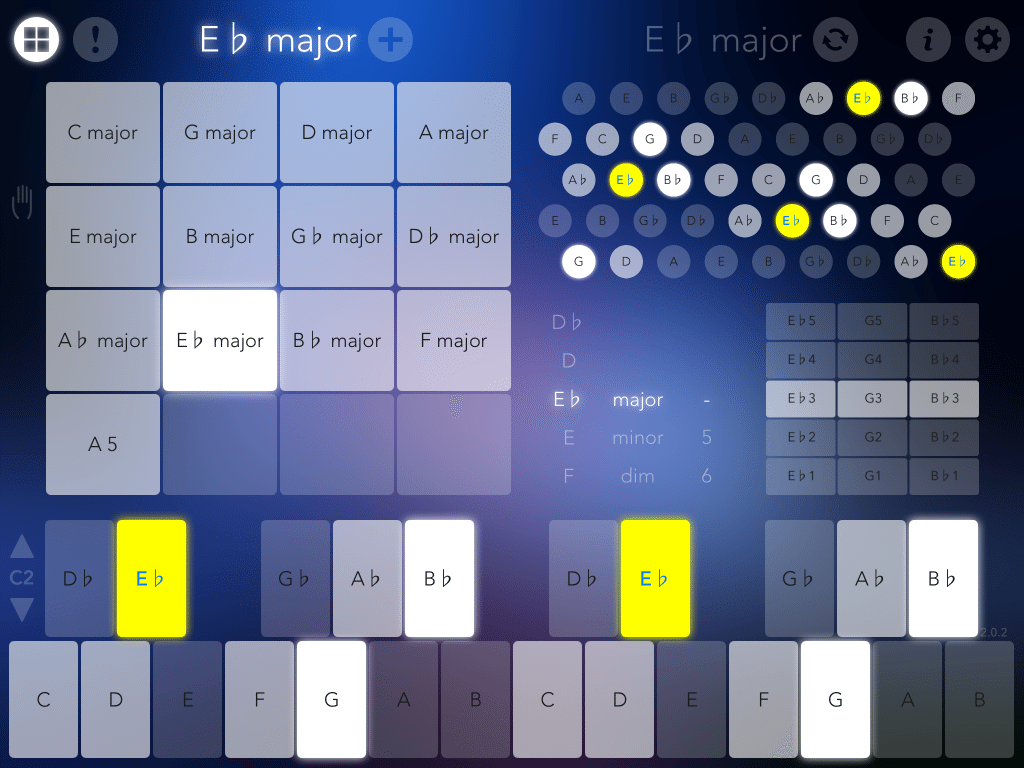 All Guns Ablazing
Firing off chords quickly. We’ve all had that desire to fire off those big orchestral hits, so overused in Eighties hits ever since the sampler became the norm. Ok, so maybe it’s just me! A 4 X 4 block of programmable pads gives us just that – an easy way to play chords quickly, program and remember chord progressions.

Pressing either the preset button or the plus next to the name of the chord being played brings up the programmable chord pads. The triangular matrix is shrunk to the side, but is maintained for reference. A total of 16 chords may be entered by using the plus button and selecting which pad to save it to. Presets may also be altered by note, chord type and octave of each note separately – quite a simple way to get some complex chords played over multiple octaves.

Chord blocks may be saved as sets and the edit menu gives further ways to edit a preset chord – by scale, random or transposing by semitones. So set up your chords, play live from chord buttons and keyboard – get ready to perform! 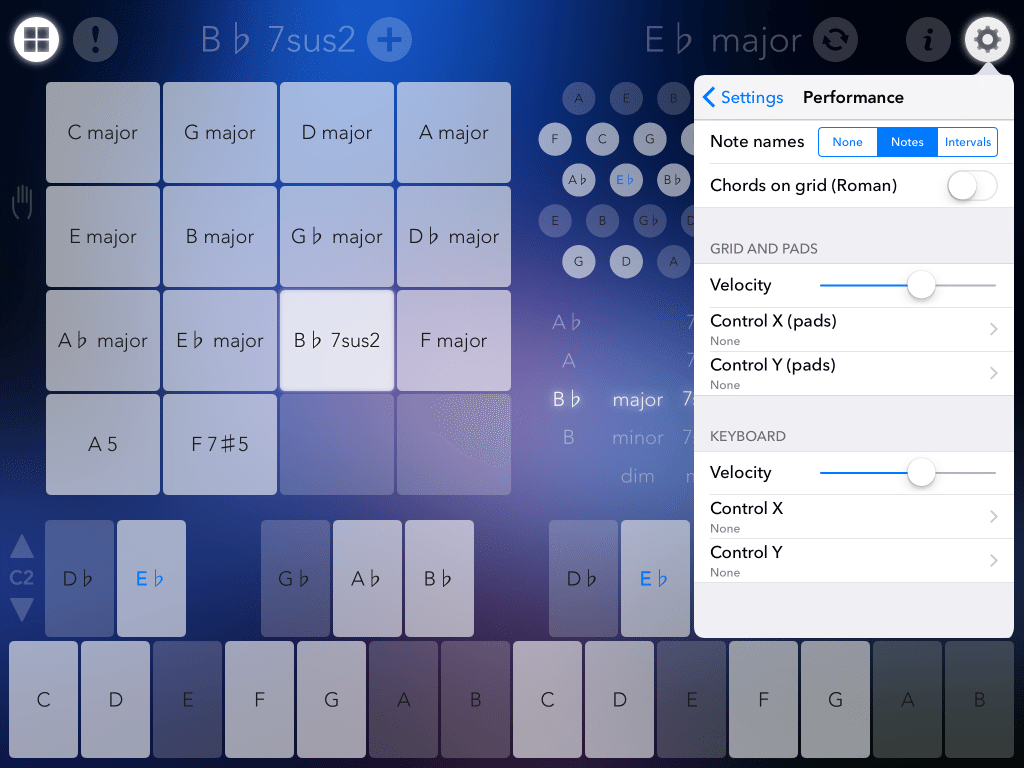 Ready for battle!
Navichord has 10 sounds including Piano, Keys, Organs, Strings, Choir and Bass. A sound may be chosen for both of the input methods, or they may both use same one. This is handy if you want to play chords and solo keys with the two input methods combined, or combine notes a couple of octaves distant with a chord – turning an Eb major chord into an Eb Maj 7 with a two octave lower D.

So we have a usable set of sounds. Yet for the battle of performance, we often require bigger guns. Yes, we do buy those multitudes of synth apps for a reason and spend hours upon hours programming the most memorable sounds imaginable. Again, Navichord obliges with the MIDI we need. Select which channel you want to send MIDI note messages to. The chord grid and keyboard can each send to an individual or the same channel.

Navichords performance settings go far beyond just note messages. Both grids/pads and keyboards can send an amount on their X and Y axis from a choice of channel aftertouch, polyphonic aftertouch or the choice of 13 other CC (MIDI control change) values. These may be chosen separately for each input method – very handy for sending multiple modulations to the same midi output. 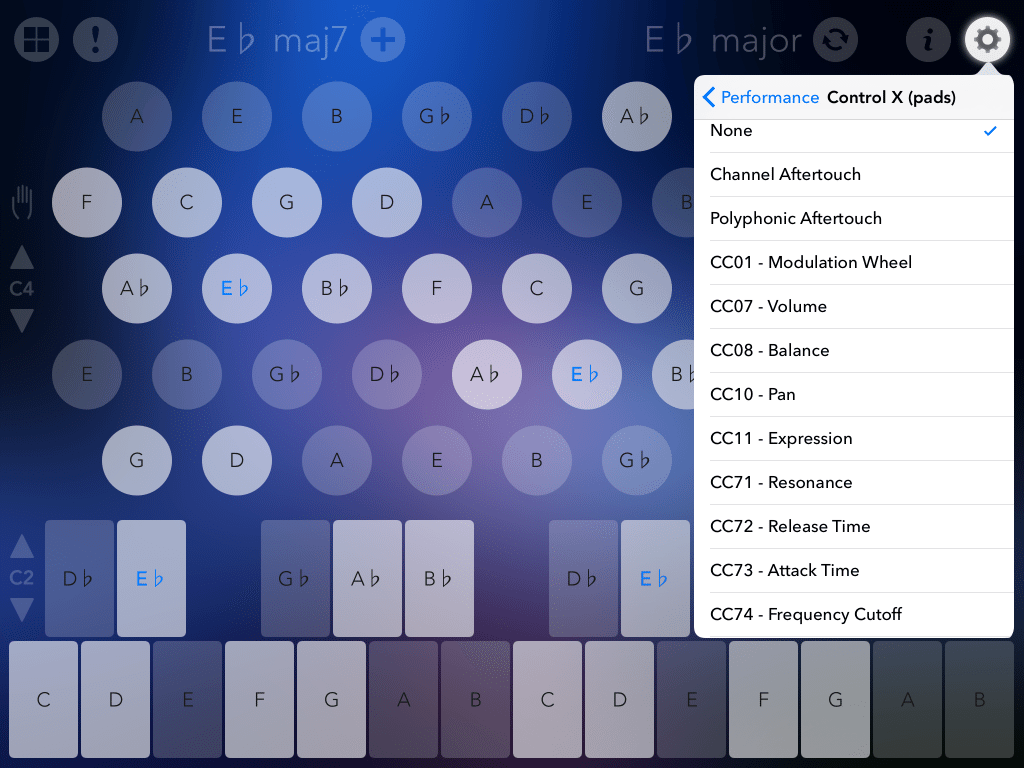 Rowing boat or Warship?
Navichord is one of those apps that I didn’t know that I really needed. Part learning app, part chord player, part midi keyboard app and part song structures best friend. This app has an awful lot to offer at very little cost (price).

Simple is Navichords middle name. It has an information button with some simple explanations to get you started, but this is a NMN (no manual needed) app. Yet often trying something really helps you decide if an app is for you. Hence Denis Kutuzov (the app developer), gives you Navichord Lite, available for free. Try all the apps chord features and if you decide you need the MIDI capabilities, just go buy the full app.

To my mind, this is a no-brainer. Even if you can play your chops on a full-size keyboard, Navichord makes some things possible that a regular on-screen keyboard can’t do, and I for one often find myself composing without a keyboard available.

Ahoy! All aboard the good ship Navichord. Interesting waters await.