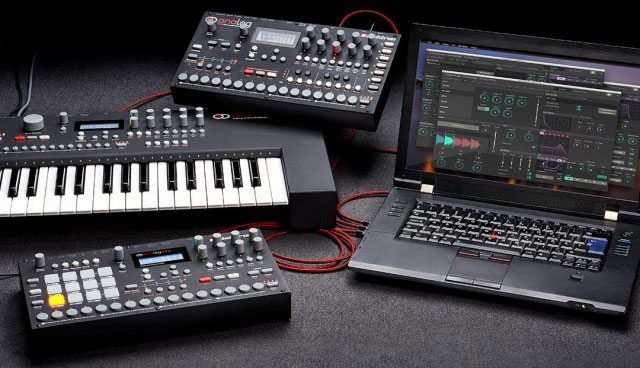 Elektron two years ago had a vision: Overbridge, a protocol that unites their analog hardware with software DAW environments.

Unfortunately, dealing with different DAWs (and ever changing operating systems) proved to be much more difficult than expected. Last summer, Elektron released the first official version, compatible only with Ableton Live. An important step towards the future, but still plagued by the defects you would expect from a 1.0 release of such an innovative project.
Elektron hired more coding wizards and kept working hard to improve Overbridge.

Today they announced Overbridge 1.10, in their words a substantial update, introducing a multitude of improvements to nearly all aspects of the software.

Great news also for Analog Rytm users and for those who are interested in getting one. The new OS 1.30 is out and adds 12 new synthesis models, nearly doubling the range of available models!
Enjoy new synthesis models specifically conceived for creating kick drums, snare drums, hi-hats, cymbals, and more.

Elektron stuff may not be cheap, but this is what you pay for: quality and added value. And let me tell you, even with high end products, that doesn’t always happen, as Tempest’s owners know well…

When using Analog Rytm together with Overbridge, please note Overbridge 1.10 is needed to take full advantage of Analog Rytm OS 1.30.

Analog Four and Keys users got an update for their machines as well. In this case a minor update, 1.23 (after the inspiring one we covered last time) that provides bug fixes and compatibility with Overbridge 1.10.

Time to download these exciting updates and explore the new features. Just make sure to go to bed at some point!