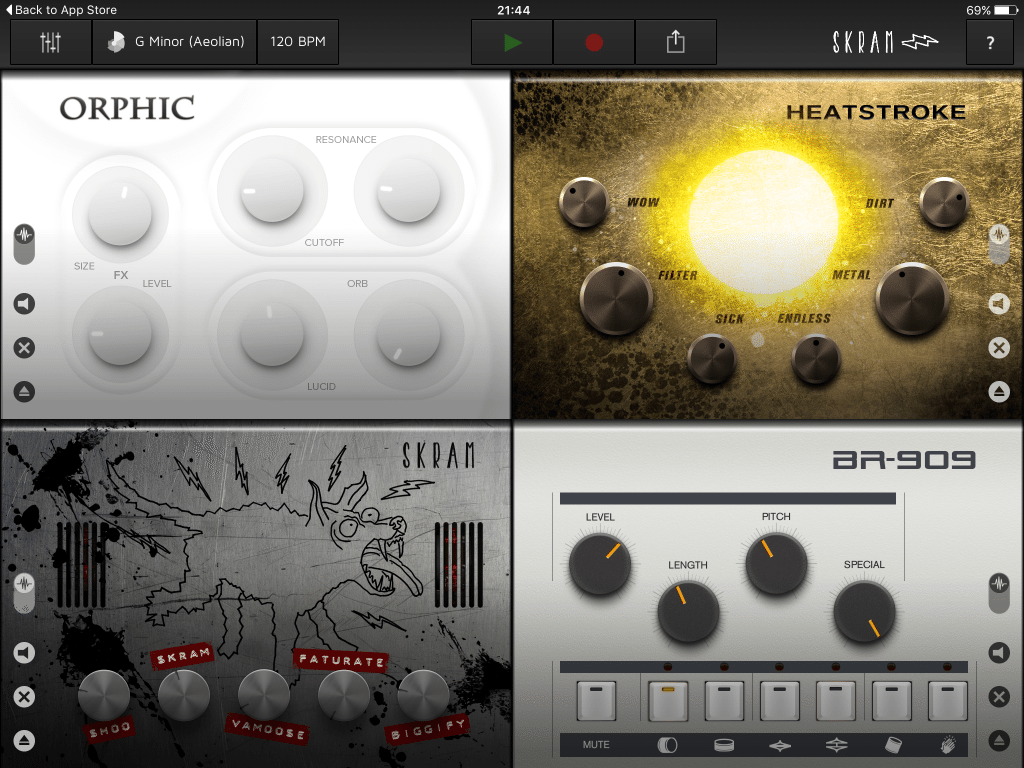 Ever since Propellerheads Reason appeared on the scene, self-contained music studios in software have been popular. I’m sure you can think of a few that grace our iOS devices. Some try to encompass all things studio, while others are more ‘slimline’ or just for fun devices.

iOS music making has developed with pace, yet we often find ourselves back in the early days of Reason. Great sounds and tracks are made, although they often stand alone – finding it difficult to become part of the bigger musical picture.

The Saviours to our endeavours have come riding forth in the shape of Audiobus, Ableton Link, AUM and a multitude of cross-platform audio / midi apps that let our favourite iOS music go forth and conquer. No longer are us, iOS users, the child kept away from the grown-ups table!

I am sure Liine (the developers of Skram) agree; after all, they gave us the rather wonderful Lemur MIDI/OSC controller app (simply a must if you need more control over your performance). So let’s venture into their new app and see where Skram sits in this land of ‘gadgets’, ‘studios’ and ‘tabletop’ devices.

Off the bat
I want to state here and now, that this is an impression of the first release bearing in mind the promised future development of Skram. Liine have made it clear that there will be future ‘free’ additions to what is in the release version. They have also been actively discussing the product on the forums, so future development seems likely. So what does come with version one?

Skram initially comes with four instruments that Liine call ‘Devices’ (3 ‘synths’ and 1 for drums). Each of these is controlled by a ‘Widget’. The supplied widgets are currently in the vein of a sequencer, arpeggiator and drum sequencer. At the time of writing, these are linked to devices, so I shall list them with their respective device descriptions. 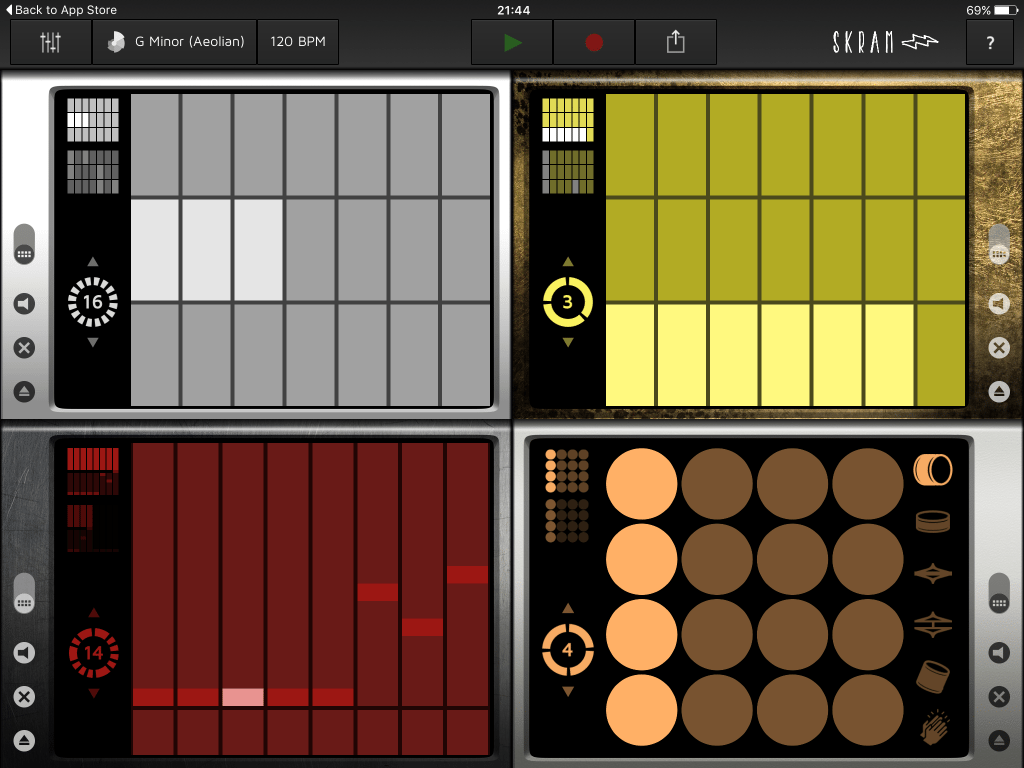 SKRAM – There are definitely shades of 303 here. I say shades, as it’s forte seems to be more towards harsh ‘bash your face in’ industrial modular than the squelchy sounds of the 303. That’s not to say it is less than, it is just different than a 303. Probably kept back from its full potential by its connected sequencer widget’s inability to do rests. Comparison may have been inevitable, yet SKRAM really does have a really great sound and it would be unfair to not see its own personality as a real winner!

ORPHIC – With its built in fx, is straight out of Tangerine Dreams kit bag. Atmospheric arpeggiated (liked to the arpeggiator widget) pulses are the order of the day. Initially, what may seem as the most limited of the devices, serves excellent sweet spots and delights in being tweaked. Don’t just set its knobs and forget it. You will get the most out of this one by playing it!

HEATSTROKE – it’s a Hot one this! (I tried to resist). To my ears, there are shades of the metallic nature of the original PPG’s including their analog filter warmth. I believe many will love this device, yet disagree with its closest relation. Maybe that is the point. Like the current trend in modular – the unique is desirable. Yes, this one is my current favourite!

BR909 – well do I really need to describe this one? Yep, it’s the drum device, complete with its attached drum sequencer widget. Kick, snare, hats, tom and clap. There is some built-in ability to sculpt each sound with level, length, pitch and ‘special’, but it is designed to be a basic beat generator and it does its job well. Personally, I hope they add some more esoteric drum devices in the future.

‘Widgets’– I’m not going to go into the details of the widgets here. I will save that for a full review. My reasoning is that as of the first release, the widgets do not save their settings. Furthermore, there are no current saves for Skram as a whole. Hence my initial impressions instead of a full review. 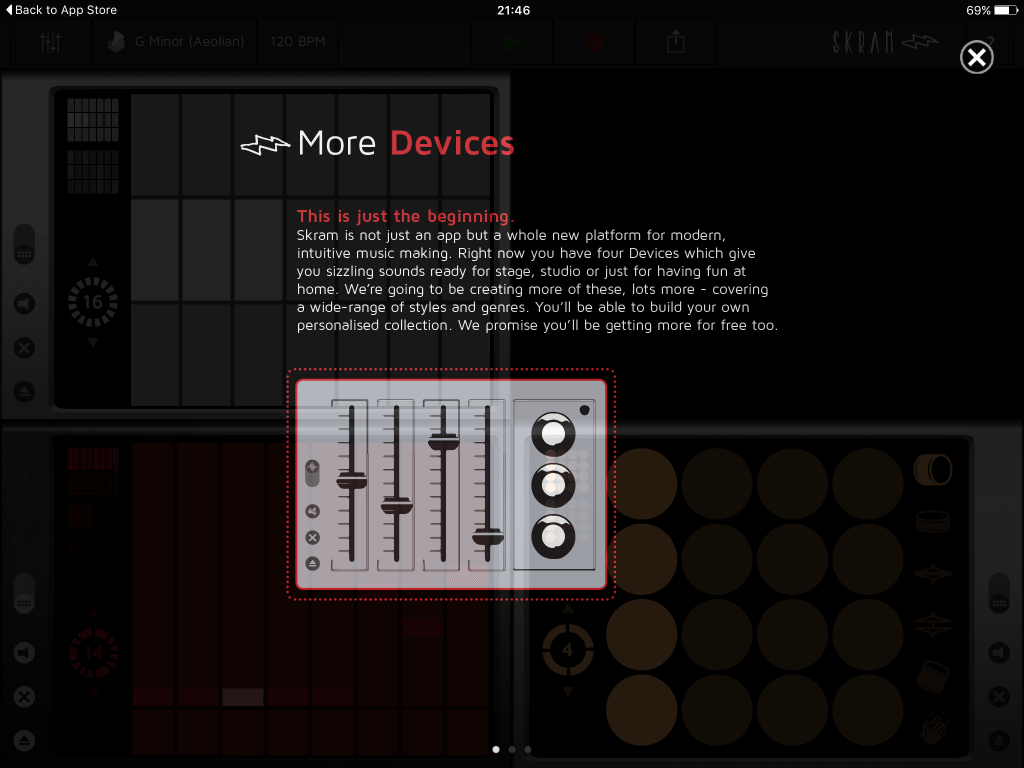 Getting in on the ground floor
Skram is currently a product that needs plenty more development and features to reach its potential. The current devices sound excellent. The widgets are easy to use, yet lack essential features, such as saves.

Recording is currently the only way to communicate your delightful musical doodles with your other iOS apps.

Yet, the app promises all these things in the future and even gives you hints of future expansion ‘in app’. So the question to yourself may be – do I invest now while Skram is cheap ($4.99 – 4,99 €), or do I wait. Wait and you may find yourself paying more, as Skram has the potential to be HUGE. I truly believe if Liine nurture this baby to its full potential, then they will be on to a real winner!