June 2020: CINEMORPHX is now available for Kontakt (regular version) and currently on offer. Get it here!

Sample Logic is a solid sample library company that has been delivering massive sound libraries for a decade. Its focus has always been on blurring the lines between organic and digital, and between music and sound design.

CinemorphX is one of the latest offerings from the Sample Logic’s stable. It’s actually a conglomeration of 3 old libraries: Synergy, A.I.R and The Elements, into a massive 30GB mega library of rich sonic goodness that can be mined for hours and hours in the creation of excellent sound.

CinemorphX is a revitalisation of the original libraries created by Sample Logic, with the new Kontakt Script engine that’s appeared on their newer releases. Kontakt’s power and processing capabilities have evolved massively, and the new scripting by Sample Logic takes big advantage of that. 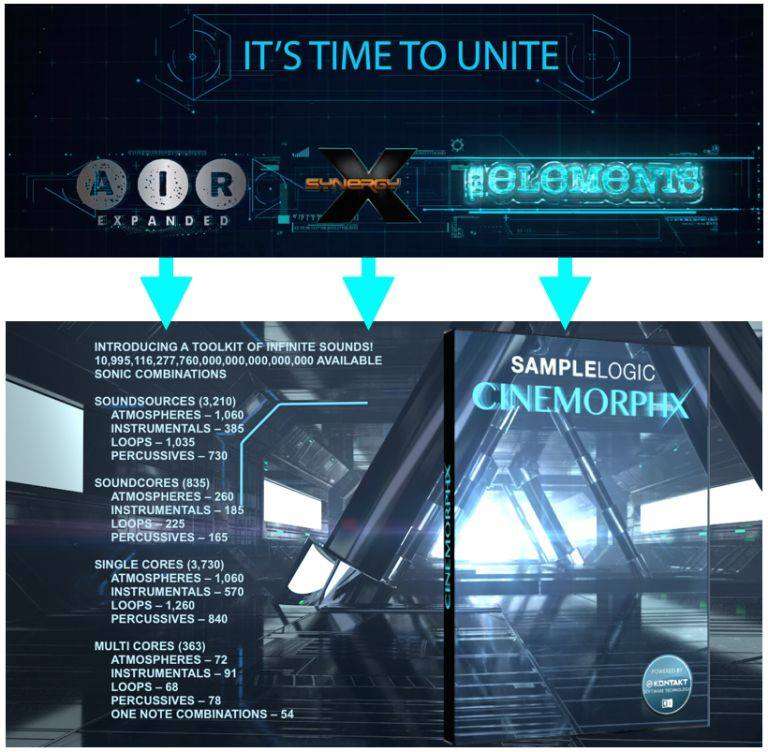 Presets? Plenty!
To get you started, there are over 6000 presets to choose from. The presets are absolutely gorgeous, building on the beautiful sounds of the original libraries. Most of the bases for composition for media are covered – swirling, evolving pads, big impactful verby drums, jagged clipped loops. There are lovely ethnic instrumental hints that blend within other sounds.

Here’s a video showcase of different multicore sounds, as it’s always better to listen than me try and describe it with words.

The sheer weight of choice is totally overwhelming at first, and this is my only gripe with this machine. With 30GB of content, you HAVE to have a good browser/filter setup that enables you to narrow down choices quickly. The whole point of presets is speed of access, otherwise you’d just make your own sounds. But with the amount to choose from, you’ve got to be able to narrow your choices down significantly.

Unfortunately, Sample Logic have biffed this option with CinemorphX, and it suffers for it. On each single core selection, there are 4 broad descriptive categories; Atmospheres, instrumental, loops and percussive. Within each of them are 5 or sub categories. That’s it. When selecting a multicore preset, after the initial 4 categories, there’s nothing. It doesn’t get nearly deep enough or categorised sufficiently to enable an efficient trawl of presets. When writing to time pressure, I had to give up on CinemorphX several times, as I didn’t have time to search, or create a sound that fit what I was looking for. OK, gripe over.

Soundcores
The library is built around four ‘soundcores’, each of which can contain two sounds from the thousands of sources available within the library. The sounds in each core can be layered with a fixed volume balance; they can be morphed manually by clicking the MW (mod wheel) button on, or they can be sequenced using the morph animation sequencer – a very flexible step sequencer. A click of a button expands the core, revealing Envelope, Reverb, pitch shift, and filter. There is an LFO, and another step sequencer that can be used to modulate the overall volume and pan, pitch, and filter. There are a further four effects that can be applied to the core, from a selection of 20. If you’re running out of ideas at this point, there are presets for the selection of FX.

Given the sound sources, which carry the range from digital synthesis, to field recordings, each core can sound very complex in and of itself. Multiply that by four, and you have an extremely layered sound machine. Of course it doesn’t stop there. Once you have four cores up and running, there’s an XY window in the middle that enables further volume morphing between the cores. You can do this manually or with a list of presets. This is great for evolving sound, making layered pads that breathe and gradually change shape into ethnic instruments, or percussive edges. You can record your movements within the XY window, and loop it. Sadly I couldn’t find a way to save the movements as presets. 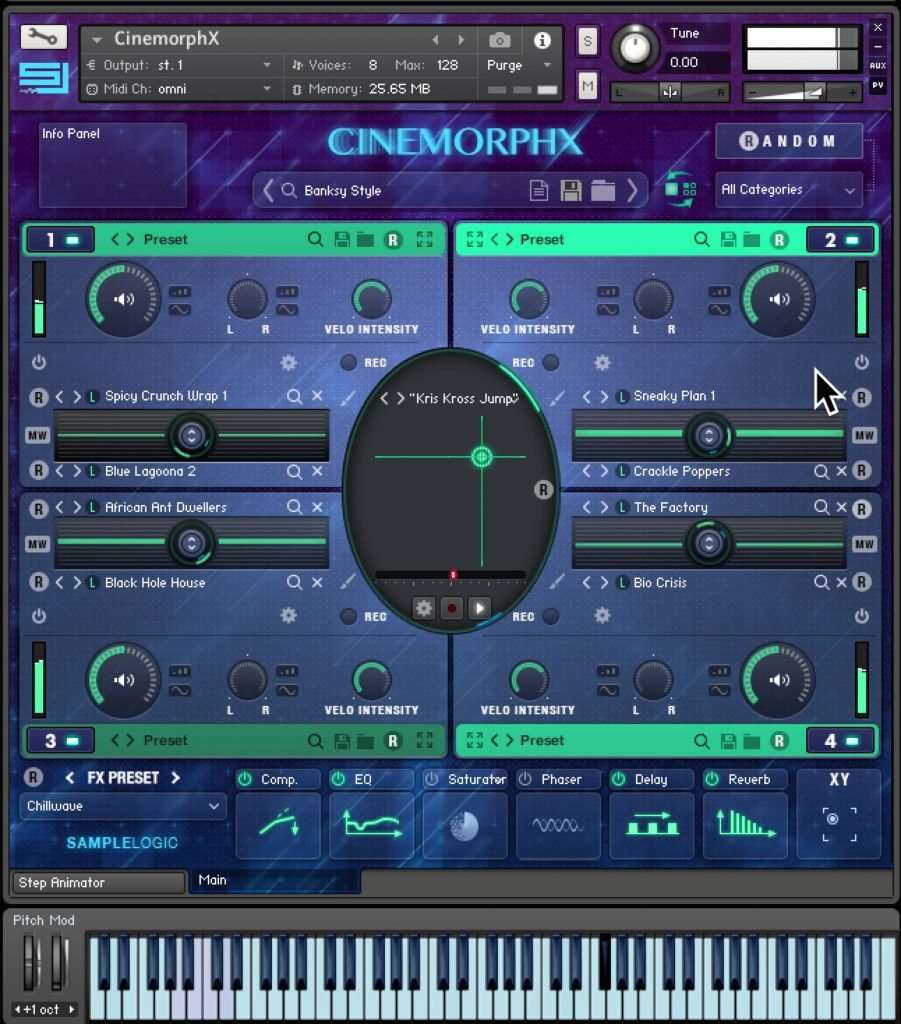 If that exhaustive list of parameter modulations isn’t inspiring enough for you, there’s a RANDOM button at the top of the GUI, which you can filter between the four sound categories. Next to most of the major parameters is an ‘R’ button. Select that, and that parameter will be randomised. This gives you control over what elements you want to change, and what you want to remain.

Once you’ve had enough shaping your masterpiece of a sound, there are a further 6 effects to run it through, and then of course you can save it. Phew. That is a serious chain of manipulation there. But wait, no we’re not finished. At the very bottom of the GUI, is a little Step Animator tag. You can now run the whole thing through a separate 4 pattern step sequencer, that sequences volume, pan, pitch, note length, stutter rate, and duration. All randomisable. I’m getting tired just writing about it. This is some serious sonic manuipulation within this script! Sample Logic have squeezed every possible useful element out of Kontakt, and into CinemorphX. It’s really impressive, if not a little overwhelming!

Conclusion
Sample Logic have sought to bring new life to their oldest sample libraries, and boy have they done well. Kitchen sink included. The original sound sources are still a wildly various and fantastic resource to mine, and CinemorphX presents a mind-boggling platform of options to twist and shape those sounds to create your own new ones.
It’s a deep program, so thoughtfully, Sample Logic have teamed up with AskVideo, and provide a free video course showing all corners of the software.
Sample Logic libraries have always been aimed at the film/tv/videogame composer, to my mind. This is no different, and the atmospheric sounds lend themselves brilliantly and immediately to those media. Recommended!

CinemorphX is on sale at an insane 50% off for a few days. Get it here!

$599.99, but with a crossgrade of $100 off retail for each of the original libraries you own (Synergy, A.I.R and The Elements).
You can use it with the full or free version of Native Instruments Kontakt 5.

Where to buy?
Support ANR buying CinemorphX using the button below. That’s the best way to attract good karma!