Night time, when the sky is clear enough to see the stars, dare to imagine life on other planets. Vast Solar Systems with a lone voice in the distance. Maybe that voice is singing along to an Earth chart song from the Seventies? Or maybe, as c3n would have us imagine, the Solar System is made solely of the musical loops we have made and cast out into the ‘music verse’.

At its heart, c3n loops ($8.99) by C3n Performance (not to be mistaken for c3n play, a free app that just presents the zoomable user interface and workflow), is a loop player for iPhone and iPad. Not a loop recorder in the vain of Loopy HD, rather it shares common ground with Launchpad or LP5. C3n takes a more left-field approach, and the developers description of ‘remix instrument for DJs and Producers’ is pretty much on the mark.

In space no one can hear you scream
C3n presents the user with an ‘infinite space’ with which to populate with star clusters full of loops. Indeed, 57 loops are yours to command from the outset, or load your own via iCloud, AudioShare or Dropbox. Zoom into a cluster with the standard iOS gesture until a loop becomes big enough on screen and then let your finger be the divine controller of each mini cosmos.

The loops supplied could be put to use for many differing genres and most have a fair amount of ‘play’ within many BPM ranges. C3n automatically adapts each loop to the current tempo, with the usual pitching effects associated with this approach. Loading carefully constructed loops for the given tempo off the bat, proved far more conducive to delivering musical results.

Pressing on the green dot in the centre of each loop initiates play. A second press for stop. Simple in execution, yet the loop must be open to a certain size on screen before this works. On more than one occasion my devine groove was stifled by a play press not registering. A more reliable execution is needed for live triggering, and thankfully one is provided.

The image below shows C3n’s rather ingenious method of triggering not only a single loop, but multiple loops. Each loop can be gathered into a ‘trigger device’ or as I shall now refer to them ‘mother ships’, to keep true to my space theme. 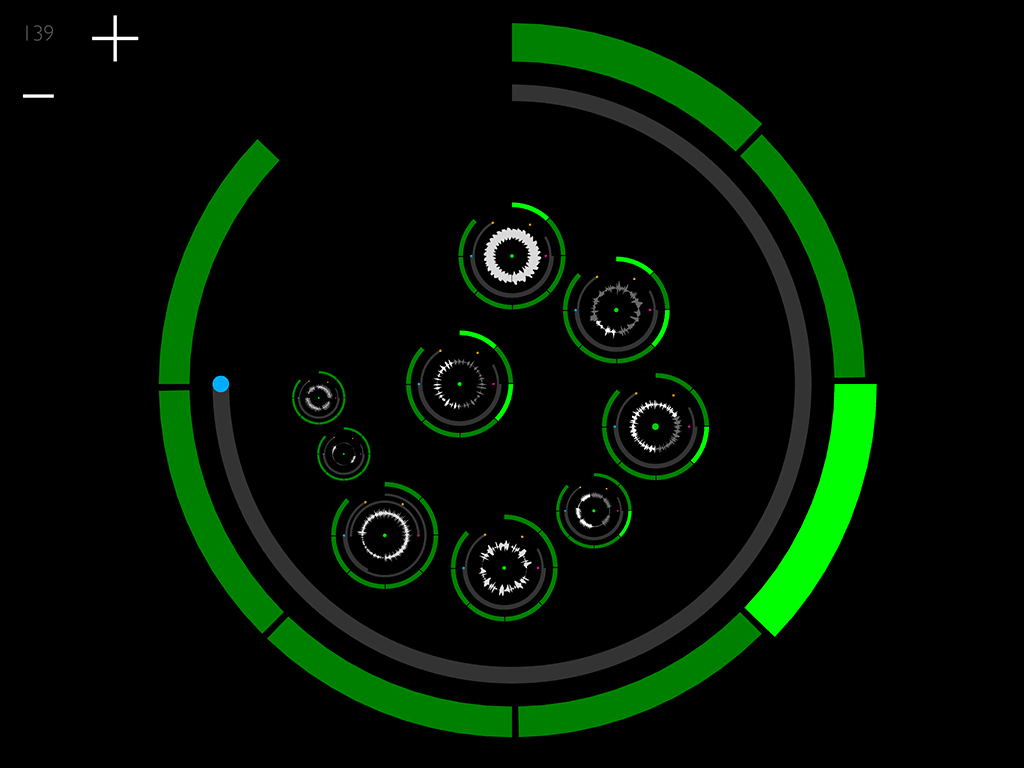 Collecting loops into ‘mother ships’ is as easy as pressing play on each loop you want and pressing the green trigger button that appears top right of the screen. Once collected, each loop can be linked to any selection of the seven surrounding green trigger play buttons. This creates seven sets of loops to be triggered per ‘mother ship’.

Each mother ship can have its own output level set which applies to all the seven trigger groups. Mother ships can be copied to make new ones, then have individual loops deleted. Creating a vast armada ready for a musical loop invasion is a fluid process and quickly becomes second nature.

Loops can be used multiple times, as the loop does not disappear from its place in the cosmos when transported to a mother ship. Loops only move aside when a ship is positioned in their space. Remember space is vast but in the case of C3n, it is essentially two dimensional, so while there is plenty of areas to manipulate your loops, no multiple saves are available. All your ideas must co-exist in the same universe. At times, this makes finding a loop problematic, yet my ‘happy accident’ cup was brimming full on many occasions. 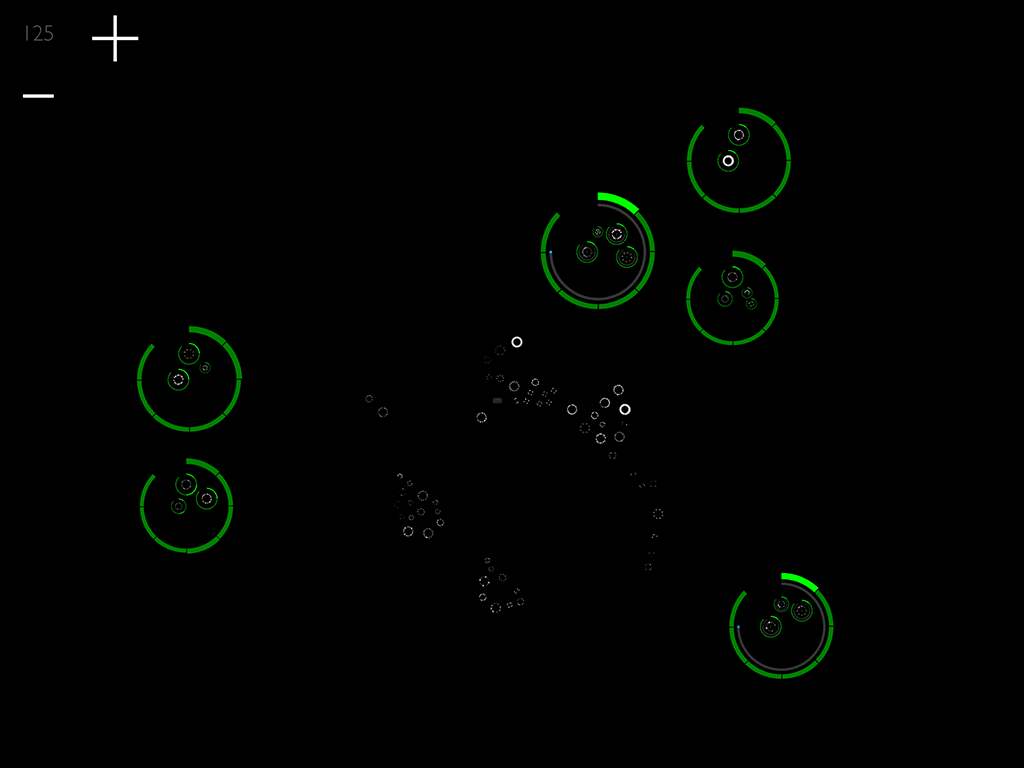 Initially, this may seem a lean choice of effects, after the multi-fx routing of some other loop players. A clue to the choices made may be held within the app’s description – ‘A radically different user interface leads to unexpected compositions and creative improvisations’. Indeed, this is true of not only the method of finding and triggering each loop, but of effects usage too.

Imagine the same loop loaded into multiple mother ships, each with its own filter settings and choice of companion loops. This would be hard to handle within other apps and I think gives a nod to what the developers are aiming for with C3n loops – the unexpected within a manageable complexity. Shoot me now before I try to wedge Chaos Theory and Dark Matter into this review! 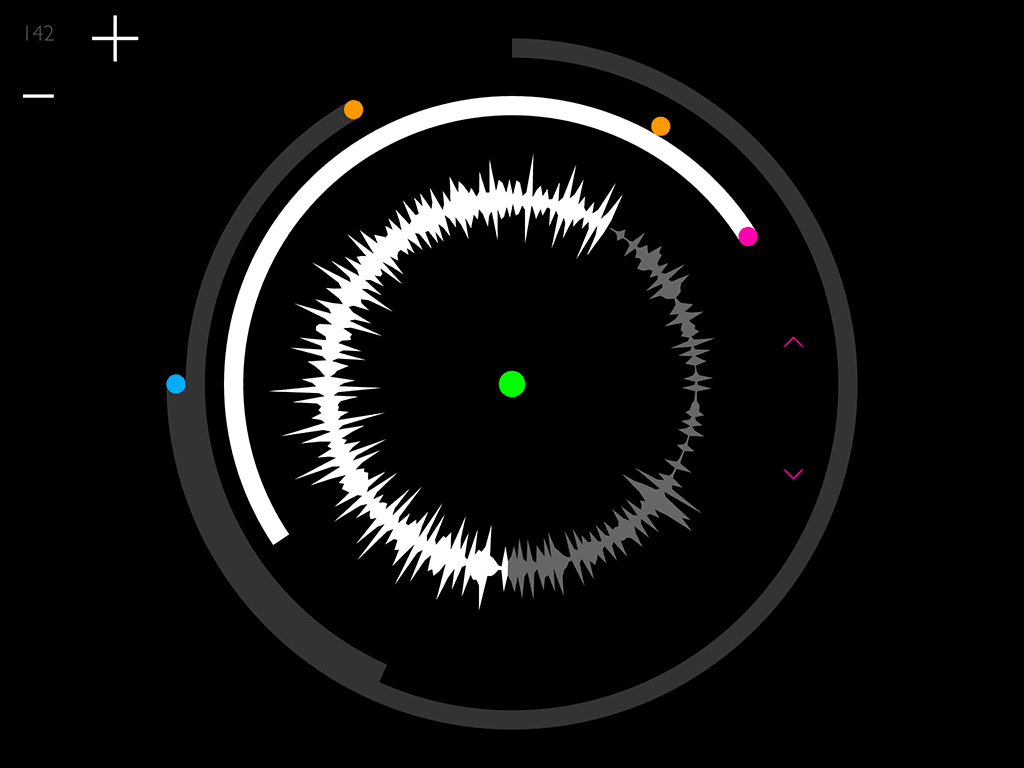 Bad space puns aside, C3n Performance may truly be onto something new within the loop player world. While not quite hitting the mark of simplicity and ease of use required for live work, C3n can help you create performance oriented looping sessions. Play C3n loops through Audiobus, throw in some choice fx apps and record the results for prosperity. Load in your own loops. Expand your universe and enjoy writing your own space opera.

Be creative, try something, try anything, just don’t be confined by the norm. When the regimented rows of square loop triggers are getting you down, use C3n to explore brave new worlds, far off galaxies of sound, to boldly go……