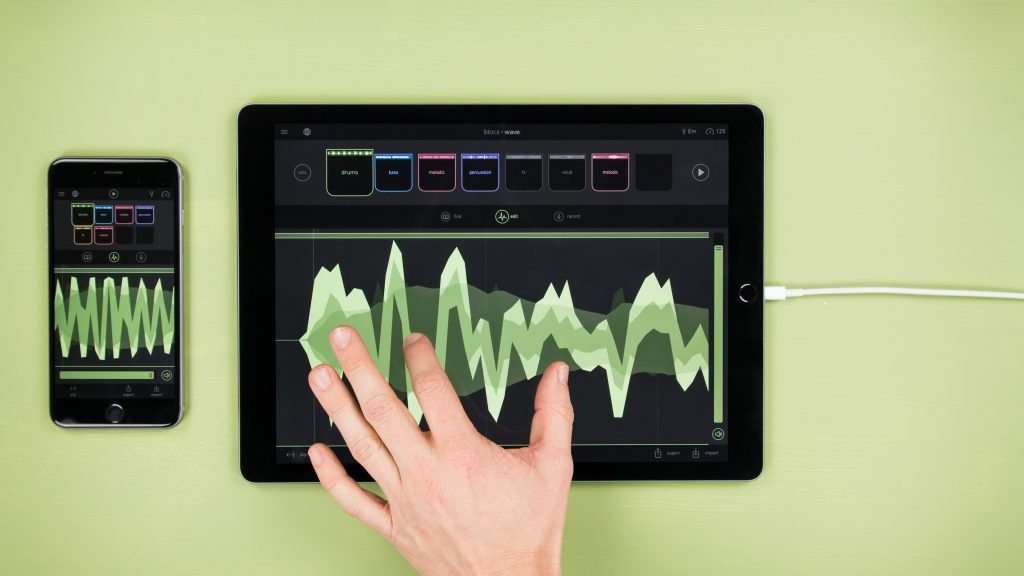 Getting on track
Writer’s block. We all suffer from this dreaded affliction at times. Those first words, or in the case of the musician, those first notes. They linger in a forbidden realm, deep and dark in our minds, refusing point blank to let our creative juices flow.

Portable devices (such as my lovingly cared for iPad) have shown themselves to be ideal companions to beat the writer’s block blues. Firstly, they are more likely to be on hand when creativity does strike and secondly they are quick to power on and get with the flow.

What makes iOS devices so successful in the war against writer’s block, is a vast array of apps designed to get ideas down quickly. Tin Pan Rhythm, Figure or GrooveMaker 2, all utilise different means, but essentially with the same aim of making music quick and painless. The development of musical ideas by simple sparks of musical delight.

Blocs Wave – developed by Focusrite/Novation, is the latest runner on the block aiming to speed away writers block and get that song idea off the starters block. My emphasis on the word ‘block’ is deliberate as Novation plan for ‘Blocs’ to be a new brand, so expect to hear more from them in the future.

A bloc party
At its heart, Blocs Wave has a simple premise. Give the user quick access to a collection of loops. Mix and match 8 loops on the fly. Create a musical idea to kick-start your song. Export your ideas to other apps to expand your idea. The emphasis here is on simple and elegant.

I hear your cries “but Sir, Novation already have a loop player!” And indeed, Launchpad by Novation gives you 8 to trigger from a selection of 48 onscreen loops. Yet while Launchpad is great at playing loops live, no live looping exists. The following key points differentiate Blocs Wave from loop players such as Launchpad, LP5 and C3n Loops, firmly pushing it towards live looper territory:

So far then we have loop triggering, live loop recording and wave manipulation all wrapped up with a design that is as easy on the eye, as it is to use.

So, let’s open our new package and see what’s within… 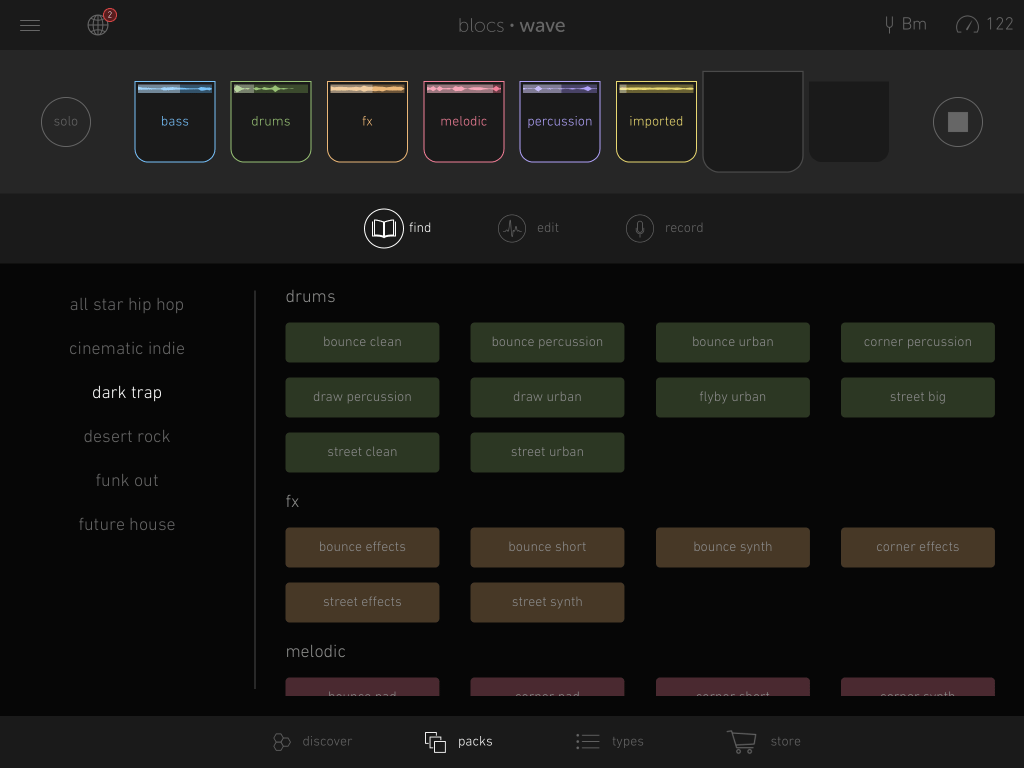 Cool kids do enjoy libraries!
Sound packs. I’m sure we are all used to the concept now. Regular packs of looping goodness for less than the price of a beer. Us iOS musicians are tough customers though, and we expect a library chock full of loops to get us started.

A six pack of sounds, containing nearly 300 loops is supplied. Packs of sounds have that sweet shop quality, it’s just so hard to stop yourself dipping in and trying a new flavour. Blocs kindly supply the following packs:

and at the time of writing, the Chiptune pack can be downloaded for free. I’m sure the pack titles are mostly self-explanatory, yet if you pushed me to describe each pack, I would have a problem. The ease of which you can access the sounds (by discover, pack, type or shop), means that I rarely cared for the restrictions of genre. If sounds seemed interesting, they were thrown into the mix with wild abandon.

Twelve extra packs are available in the store, with regular changes and additions promised. First tick achieved – a suitably bountiful feast of loops. All your drums, percussion, bass, melodic, vocal and fx needs are covered. For those rare times when you need something specific, you can always roll your own. 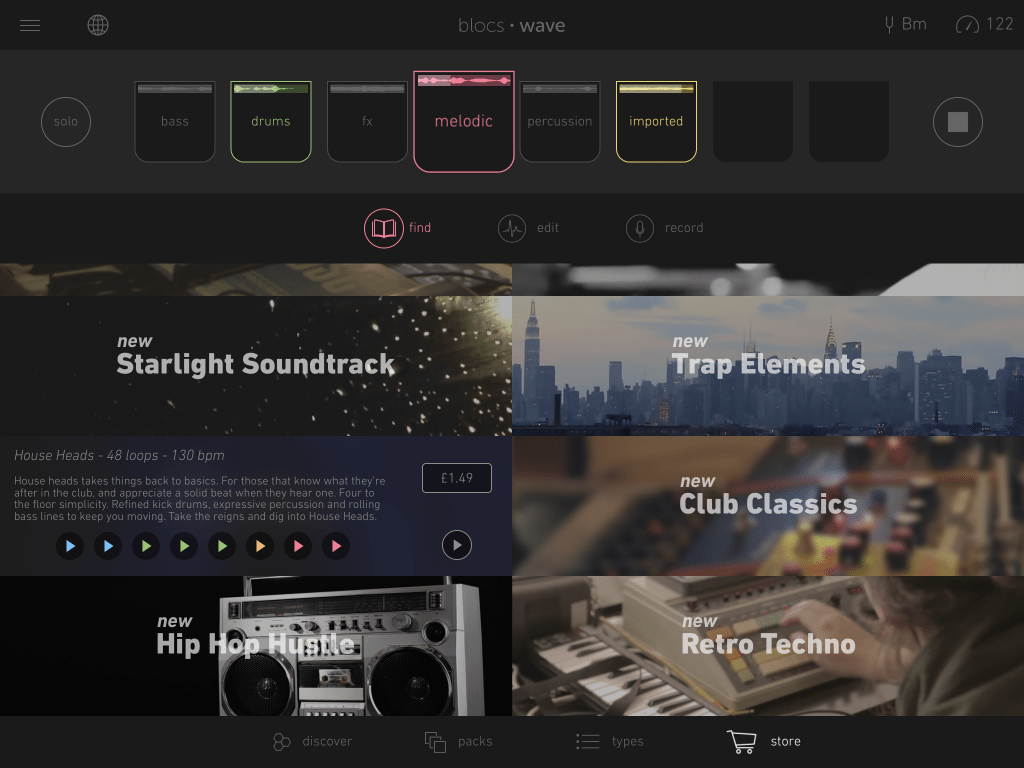 So, let’s get looping…
Eight Blocs are available for loops. These are initially blank across the top of the screen. Select one to load your choice of loop, manipulate the loop contained or record a loop into the bloc. Pressing and holding a bloc brings forth a dialog box for copy, paste or delete functionality.

Below the blocs, are a choice of three modes:

Edit – the work area now shows any loop in the selected bloc. Manipulate that loop people!

Blocs have the following states:

Active – an active block is shown as coloured and will produce sound when play mode is active. A bloc can be made active by swiping from the bloc in an up or down motion.

Non active – a non active bloc is greyed out and will be muted.

Selected – only one loop can be selected at a time and will appear bigger than all the other seven blocks. This bloc may be changed, have its wave manipulated or be recorded to. The selected bloc can be soloed by pressing the solo button left of the blocs.

Non Selected – all the other 7 blocs are classed as non selected. These blocs can be made active, non active, copied from, pasted to and deleted.

So with loops a loaded, blocs made active and the play button pressed, I got down with my groove.

The first thing I noticed was the elegance of the interface. I can only guess that a lot of thought and effort has been put into making ease of use a top priority. Indeed, without reading a single manual (pretty much how I roll), or watching the introductory video (which can be viewed ), my groove was happening.

Within minutes a set of suitable loops were loaded and playing. Don’t like a choice? Change it quickly. Song too slow? Tap in a new BPM and my blocs adjust accordingly. Yes, there are miner artefacts from a large BPM leap, but often they were quite interesting with musical results. 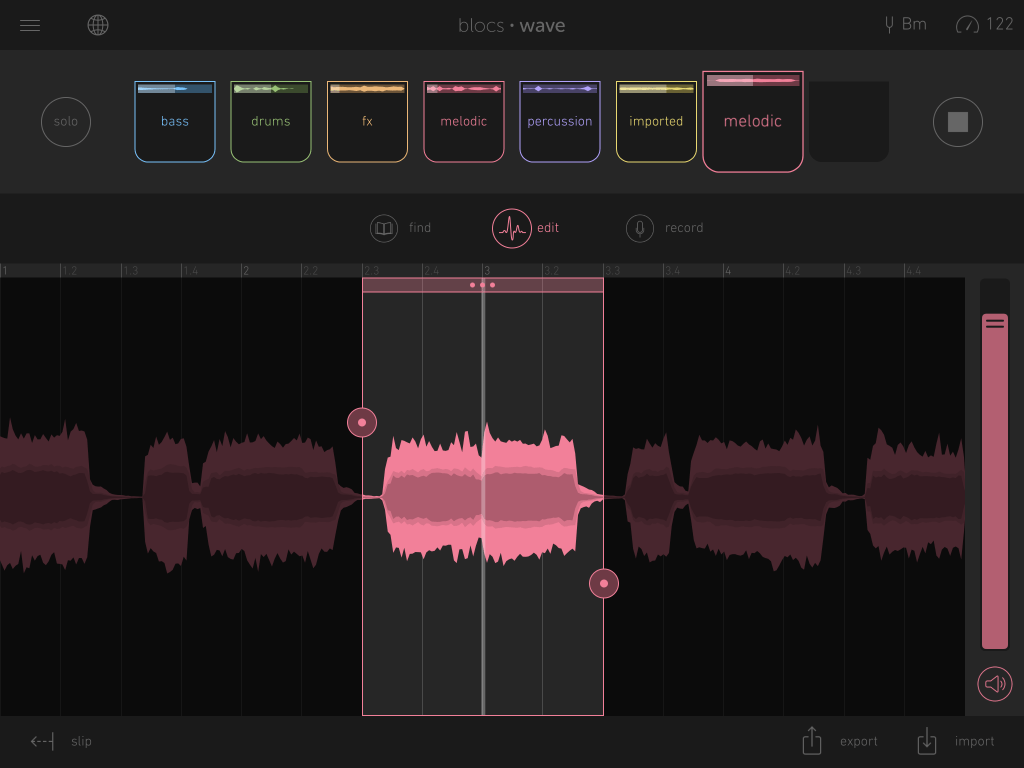 Getting creative with the selected loop was surprisingly smooth. Select the bloc you want to manipulate while in edit mode. Your track can be kept in motion, while you can trim the loop, change its volume ( with visual feedback) and by sliding the ‘slip’ button, alter the position of the loop within the bar.

Do not underestimate the ‘slip’ feature! Within seconds, I was making copies of looped vocals and creating delay effects. Thickening up melody lines. Placing dual drum blocs, ‘slipping’ one just fractionally ahead of the beat to create a human feel in a trimmed section. All of this done ‘live’ with very little aural disturbance.

There is definitely more fun to be had from Blocs Wave than the cost of admission would first have you believe!

Live loopers loop longer
Connect up your audio interface of choice or use the built in mic, hit the record selector and you are in live loop mode.

Many of you may already use live loopers on your iOS device and if like myself, your timing is a bit…ahem…dodgy, well, frustrations can soon arise. Blocs may help sooth your live looping nerves just a tad. Remember that slip feature I raved about earlier? Trim your loop to taste and ‘slip’ it back into the beat! Again, surprisingly fast when you get the hang of it. 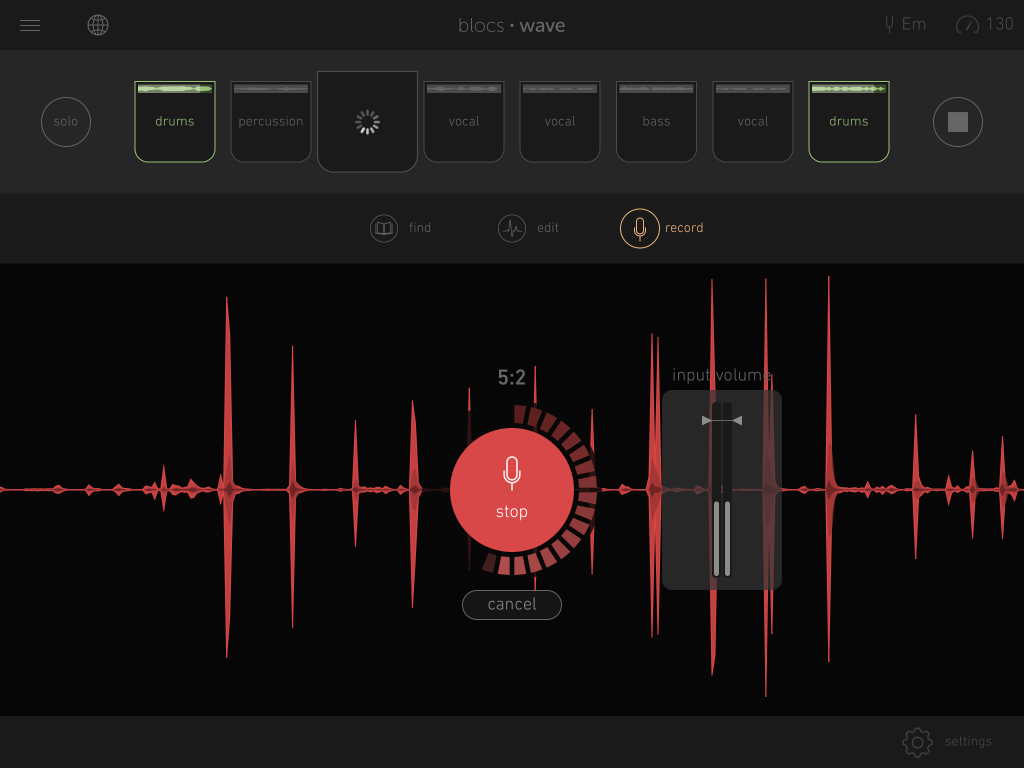 Strengths abound in Blocs Wave – simplicity of use during live looping, just one of them. This particular mix of library loop player and live looper seems to hit the nail on the head as far as beating those writers block blues – it actually becomes difficult not to garner inspiration from playing with this app!

It’s only V.1 baby…
My hope here is that you can sense the creativity and just good ol’ fashion fun that Blocs Wave brought to my personal musical party. iOS apps are a strange breed though. Often they have that ‘cool’ factor alone, yet they refuse to play well with others.

We as musicians are becoming more and more reliant on host apps such as Audiobus and file distribution apps such as AudioCopy or AudioShare. Thankfully, the mentioned apps, along with hardware input/output, are all supported.

So Blocs Wave gives us ‘cool’ and tries its best not to be the lonely boy at the party.
I Love this app! Ok, not the love for one’s wife, but part me not from my blocs! Gushing maybe, yet I still feel that the little niggling doubts of missed opportunities. I console myself though with the face that this is only version one, and the developers are already discussing enhancements and features to come.

For now, I will leave you with what I believe is a strike out and where the developers firmly hit a home run.

Recommended for dabblers and professional creativity. Try exporting loops to other apps for warping and then import them back. A real never ending loop fest.