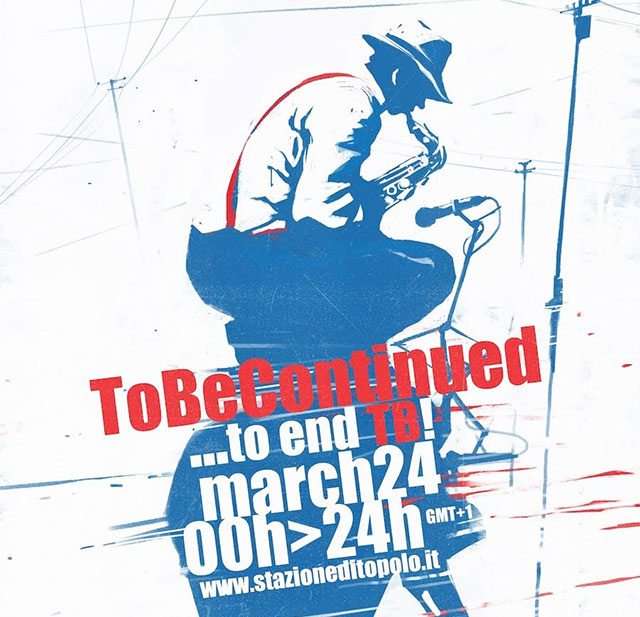 ToBe Continued is an event that puts together a good cause (the initiatives to stop Tuberculosis, or TB) and a global stream of musicians, for an original concert lasting 24 hours (from 00.00 hours to the midnight of March 24th, GMT+1)
During this uninterrupted 24 hour marathon (ToBe Continued… in fact) each musician has at disposal a 30-minute window.

The event is coordinated by Antonio Della Marina, musician and computer music composer, and by Moreno Miorelli, artistic director of the annual gathering “Stazione di Topolò/Postaja Topolove”. The whole initiative is under the aegis of the Global Health Incubator, the ‘laboratory’ established in July 2009 in Topolò to create links between the world of creativity and that of science.

Connect and listen
Anybody can listen to ToBe Continued…,as long as an internet connection is available, by connecting to the website www.stazioneditopolo.it.

I’ve enjoyed the first few hours of the stream, and I’m looking forward to hearing the rest, including the final performance by Scanner (Robin Rimbaud).

Fighting TB
Tuberculosis (abbreviated as TB in English and TBC in Italian) is a curable disease. However, it is often underestimated, if not totally ignored, as a major human scourge, although it is globally the leading cause of death from an infectious disease, causing the loss of 1.7 million people each year, 4000 every day, with thousands of unnecessary victims also in the richest countries every year.

The project ToBe Continued…is also part of the initiatives organized by Stop TB Italia to commemorate World TB Day. The event has the help to Eli Lilly MDR-TB Partnership and Sanofi, the collaboration with UNIKUM – Culture Centre of the University of Klagenfurt, that will provide the facilities for the coordination of the concerts and the patronage of Global TB Programme of World Health Organization.