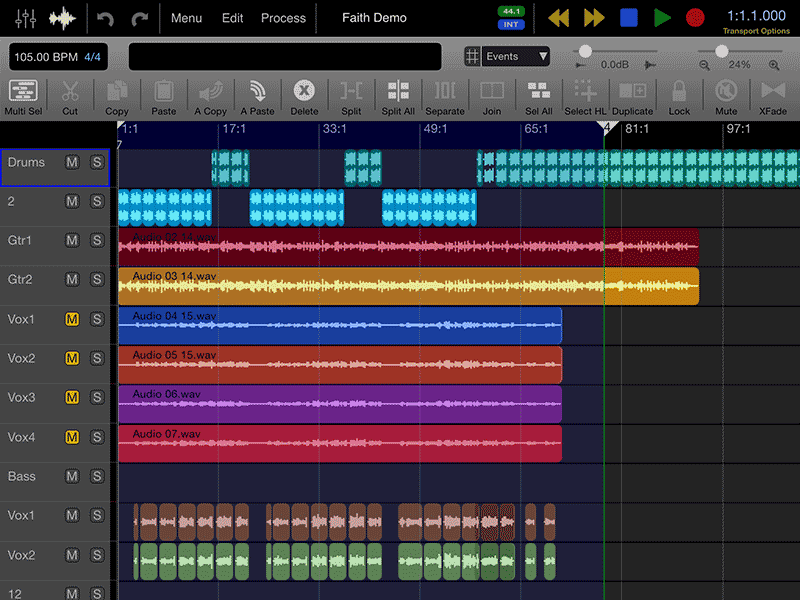 Auria Pro by WaveMachine Labs (makers of the well established Drumagog plugin) was released at the end of 2015 and brings a desktop class DAW to iOS.
The original Auria was already powerful by mobile standards, but the latest version raises the bar in terms of features and performance and brings a full feature set to the iPad.

What makes Auria special is that it’s the only mobile DAW that aims to offer a no-compromise recording and mixing environment, using plugins and instruments that are direct equivalents of their desktop counterparts. For example, the included Twin 2 synth is a direct port of Fabfilter’s VST plugin, and works in the same way (and will consequently tax older iPad models). 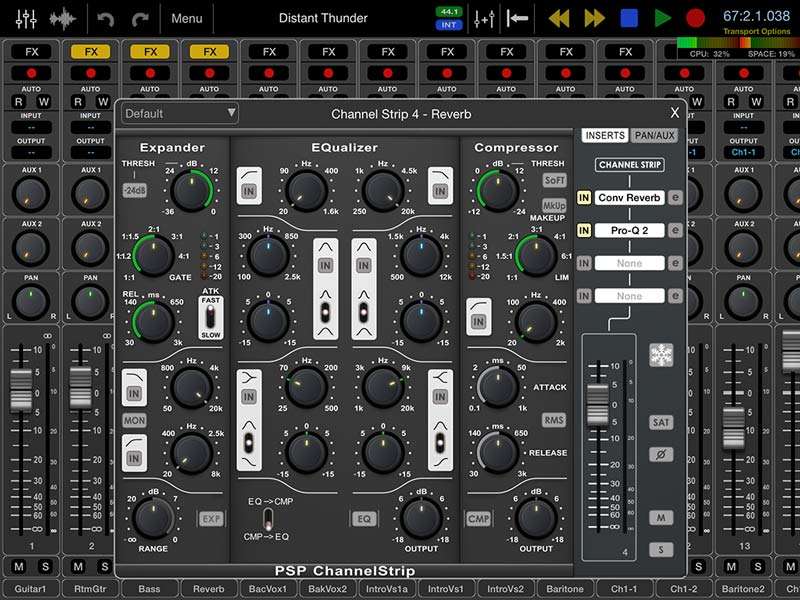 Auria Pro comes bundled with a PSP Channel Strip with expansion, EQ, and compression on every channel, and a PSP Masterstrip on the 8 sub-groups and the Master Channel that offers EQ, bus compression and a limiter. There is also an additional brick wall limiter on the Master Strip.

Included in the base package are a convolution reverb, an algorithmic reverb, and PSP delay and chorus effects. Finally, Auria Pro also comes with Fabfilter Twin 2 and Fabfilter One synths included, as well as Lyra which is WaveMachine Labs own sample player instrument (which comes with a wide range of drum kits and instruments as standard).

A Powerhouse Right Out Of The Box
Right out of the box, Auria Pro is a powerhouse and offers all the tools needed to achieve professional results. On top of that, there is also an extensive list of available plugins from the likes of Fabfilter and PSP among others, which will further extend the arsenal at your disposal come mix time. 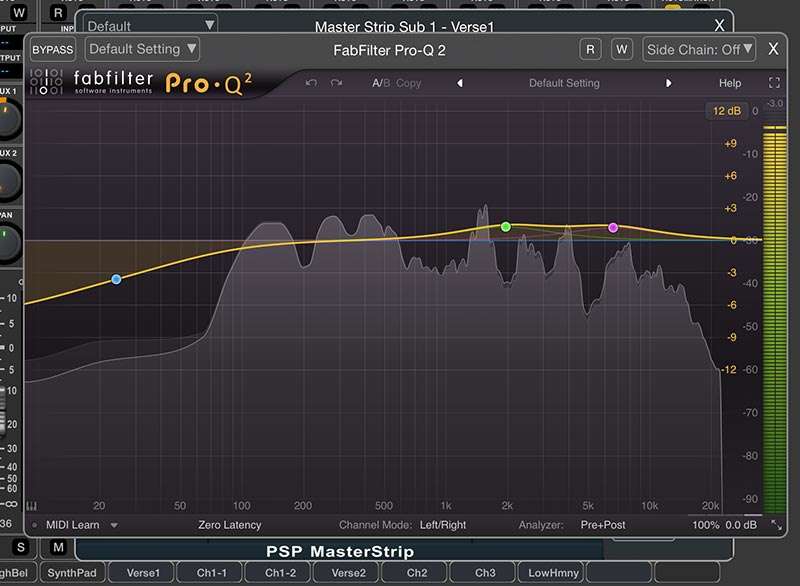 For example, the ever useful Fabfilter Pro Q2 is a great alternative to the bundled EQs due to its wonderful UI; or the more exotic Fabfilter Timeless 2 which offers a whole range of delay based effects, from simple delays to chorus and flanging, all of which can be modulated with LFOs and synced to the beat.

Thanks to these extra plugin options almost every mixing need can be covered to professional standards. On a recent iPad model you can comfortably run 25 or more instances of the plugins without needing to freeze tracks. For anyone who has had to deal with the hassles of using IAA plugins on iOS, Auria’s native plugins offer a much easier and more convenient workflow.

MIDI & Other New Features
The big addition to Auria Pro has been the inclusion of MIDI, which finally opens the app up to electronic musicians and producers.
The MIDI features are fairly comprehensive, with real time quantizing and groove templates available for example, as well as many ways to process MIDI destructively (humanize, legato, quantize, etc…).

The app also plays well with other MIDI compatible apps, allowing you to control iOS soft synths and drum apps, as well as being able to record from apps that can output MIDI.

However as well as the MIDI several other new features have been included in the new version of the app, these include real-time audio warping, flexible mixer routing, a tempo and time signature track, and external hard drive support. Of these, the mixer routing and the audio warping have been by far the most useful for my personal workflow.

The new mixer routing allows up to 20 assignable busses, and tracks can output to several busses simultaneously. The AUX sends can also be sent to a bus, which means that for example a reverb send can also have EQ on the reverb itself. This kind of flexibility allows for a very fine level of control when mixing tracks.

There are now also six AUX sends available on each track (up from two in the original Auria). Track count is also unlimited now (depending on the power of your iPad obviously). Add other mixing features such as side-chaining and 8 subgroups, and you have a mixing platform that is unparalleled on iOS.

The audio warping is extremely useful for correcting timing errors in recorded performances, and I use it extensively on double-tracked vocals to make sure they match as well as on guitar and keyboard parts to fix timing errors. The amount of time this saves compared to having to re-record what might be a great performance due to minor timing issues is a real bonus, and worth the price of the upgrade alone for me. 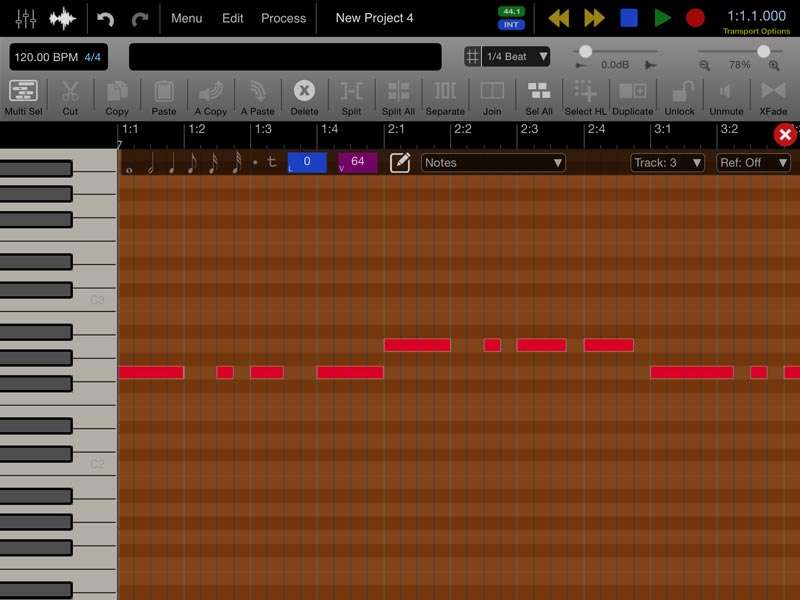 The New Piano Roll Editor And Automation
Along with MIDI comes a new piano roll editor, which initially had a few usability issues. Much to their credit, WaveMachineLabs listened to user feedback and improved the editing to make it more touch-friendly in the 2.03 update.

Automation editing was also reworked in this update to make better use of the iPad’s touch interface. And this brings to what is possibly Auria’s strongest feature: WML are a very responsive and customer-friendly company, and the developer (Rim Butinas) goes to great lengths to listen to users and implement requests and fix bugs. This means that Auria is a constantly evolving product that sees frequent updates and improvements.

In Use
So what’s the app like in actual use? Well as someone who made extensive use of the original version, I have spent the last three months putting the update through its paces. Inevitably there have been some teething issues and bugs in the initial release, but the regular updates have been bringing real improvements, and the app is becoming more stable and workflow is improving with every new iteration.

My experience has been extremely positive, and I really enjoy using Auria Pro. The new synths from Fabfilter means that I need to rely less on external sounds (and so IAA and Audiobus), which makes life simpler. With the internal synths everything can be kept live and tweakable, which isn’t really possible with external instruments.

The Lyra sampler instrument is also extremely useful, and comes with several gigabytes of free downloadable content, from pianos, to orchestral instruments, to drums. It can also load SF2, SFZ and EXS instruments, many of which can be found for free or bought from 3rd parties.

The samples are streamed off disk, meaning that very large sample sets can be played reliably without running into memory problems, and Lyra exposes many controls to the user for shaping the sound of the samples. Lyra has an on-screen keyboard and some velocity sensitive drum pads (which use a technology developed by WML that makes use of the iPad microphone to determine velocity).

One area that could be improved upon is the Lyra keyboard, and (even more so) the keyboards on the Fabfilter synths. At the moment, these are all a little too small and inflexible for satisfying on-screen playing, but WML are working to improve this in a future update. For the time being it’s best to use an external MIDI controller or one of the many controller apps available on iOS (my favourites being ChordPolyPad, Geo Synth, and MIDI Studio Pro).

The new routing is a godsend on any complex mix. One of my biggest issues with the original version of Auria was that the convolution reverb tended to be overly bright sounding, but now I can simply route the AUX send to a bus and put an EQ on after the reverb, to tailor the sound to my taste.

Busses also allow for any kind of parallel effect, simply by routing a track to two busses, one dry, one wet, and blending between them with the fader levels on each. This makes mixing very flexible and non-destructive and is really unique in the iOS ecosystem.

Live instrument recording works very well with Auria Pro, and input routing has been improved so that the input can be assigned directly from the mixer view rather than needing to use the Input Matrix.

IAA unfortunately still has issues, and often leaves zombie apps running in the background (this is a known iOS bug).
Audiobus is much more reliable than IAA, but less convenient since it requires a little more setup. Auria Pro does have a very solid implementation of Audiobus, and automatically creates new tracks for each new Audiobus instrument.

Time For A New iPad?
The user experience in Auria Pro is likely to be highly dependent on hardware, and recent iPad models (Air, Air 2, and iPad Pro) are highly recommended, since older devices are likely to struggle with the demands that the app is to place on them. It’s also important to be aware of latency at all stages in the project.

Tips For A Better Workflow
At the early recording stages I try and use the lowest possible latency, which means being careful not to add too many effects early on, the Channel Strip effects are efficient and don’t tax resources heavily and are ideal to use at this stage, but insert effects are better saved for later.

On iOS, any app using MIDI can not use latency settings higher than 512, which means that if your project uses MIDI you might face some constraints. My workaround is to split my project into different stages, with one file for recording and MIDI, then a duplicate made where the MIDI tracks are bounced to audio. This means that I can then set my latency to the maximum of 4096 during mixing, allowing me to add many more plugins than if I was using a latency of 512. It’s at this stage that I will add insert effects and make the most of the power available in Auria Pro.

Conclusion
Auria Pro is not the simplest DAW available on iOS (that would be GarageBand), it is a complex package that requires an investment of time to learn. However it is definitely the most feature-complete and professional sounding DAW on the iOS platform, and it will reward you with great results if you are prepared to put in the time to learn it. It has a lot of flexibility, and the workflow is improving with every release as WaveMachine Labs refines the app according to user requests.

Please note: buying Auria Pro through our links you will support us and help us publish more reviews like this one. Thanks!