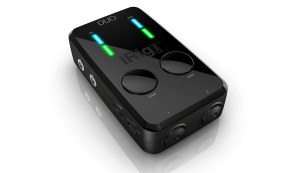 In our 2013 IK Multimedia iRig Pro review we praised the ultra-compact one-channel audio interface for its features/size ratio and flexibility.

Made for mobile warriors (and small studios as well)
As said, the iRig Pro DUO is a device made to go out and record anywhere: three power options (including two AA batteries, so not to drain your iOS device) make it one of the most flexible dual channel interfaces we’ve tested.

For laptop and Android users: when using the included USB or Micro USB to OTG cable connected to a laptop or Android device, iRig Pro DUO can be powered by the attached device or onboard batteries. 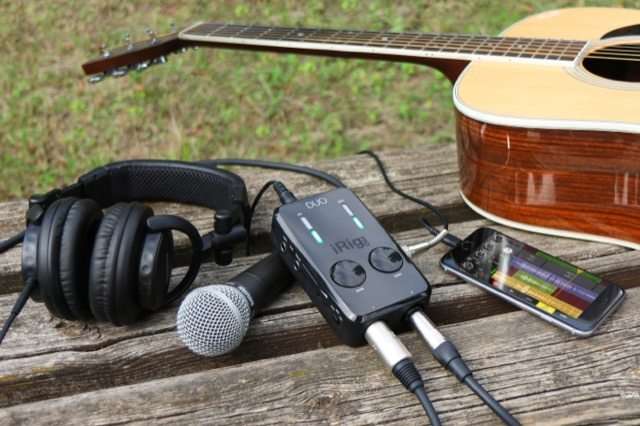 Now, I’m not much of a mobile warrior myself, so I won’t pretend I’ve been spending a whole day in a forest, recording all kind of birdsongs (which would be nice, though!). That said, it’s nice to have options, and I like the idea that with a few batteries in my backpack I could easily do that.

What I did was take the iRig Pro DUO for a (safer) trip to my piano room, along with a few mics to record some short improv sessions on my iPad.
The results were great: a clean input signal, enough gain. Definitely something I would use for an album.

Sure, if you have money to burn you can find higher-end products, but if you’re budget-conscious, I would probably focus more on your mics and your performance skills than on the little difference a fancier interface would make.

You’ll also find a phantom power switch (FYI: when +48V phantom power is turned on, it works on both channels simultaneously, and the two channels with XLR/TRS combo audio jacks and phantom power can accommodate everything from high-end condenser microphones to guitars, basses, keyboards and more. I’ve plugged and recorded some of my synths, and the unit did a great job.

Having a MIDI out plug (through the included breakout cable) is handy, to let your iPad drive your analog synth or drum machine. This is something I’ve been missing when using the original iRig Pro (that featured only a MIDI in).

Note: the MIDI breakout plugs support the standard MIDI Din connectors (the 5 pin ones). You won’t be able to plug MIDI USB devices to the iRig Pro DUO. (I guess the engineers wanted to help you save battery power).

Battery life
Speaking of battery life, this is what IK Multimedia claims:

I found these figures to be quite accurate. Personally, I wasn’t expecting much more than this.
I mean, the battery power option is necessarily a trade-off, I wouldn’t consider it the main power option (after all, you’ll only need it when using the interface with an iOS device – if you’re using a Mac or PC laptop the unit is USB powered, same for Android OTG devices). 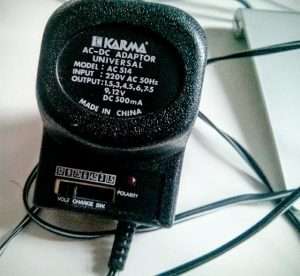 I haven’t tested any external battery pack, but I expect them to work, so if you’re really planning a long off-grid session with an iOS device, I would either bring a few spare batteries or a good (10,000 mAh at least) battery pack with the right DC plug.
For my studio session with iRig Pro DUO and the iPad, I’ve used an old power adapter I had here (one of those $10 ones). I’m sure those users without a cluttered drawer like mine (full of all possible cables and adapters, way too many!) would appreciate finding an adapter in the box.

Beyond mobile
I’ve actually used the iRig Pro DUO mostly with my Mac Mini (and a Macbook Pro). It’s a class compliant device, so no drivers are needed.
OS X and Logic Pro recognized it right away, and the interface performed as expected.
Buffer-wise, I’ve been using it at 128-256 without issues (I never go below that anyway).

Only using the iRig Pro DUO while listening to music through web players (Google Music, etc.) I had some issues with the unit entering a sort of “sleep mode” whenever there was no music playing for more than 7-8 seconds or so.
This results in a quite annoying pop sound whenever the unit goes out of its sleep mode. Hopefully, a firmware update will fix this. 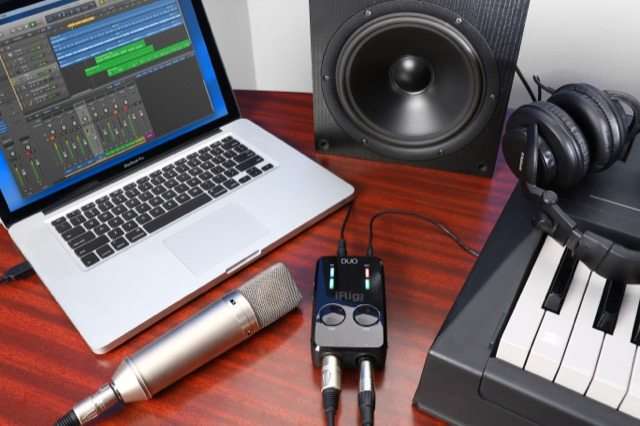 Last but not least, as usual with the IK Multimedia hardware line, registering iRig Pro DUO you will be able to get free in-app stuff – amps, instruments, etc. – using the free versions of Amplitube, iGrand Piano, etc.

Conclusion
The iRig Pro DUO is a great choice for those mobile warriors looking for studio sound quality recordings, or simply for all those users looking for an affordable and compact dual-channel interface to start their recording adventures.

The sturdy and lightweight thermoplastic housing, the almost universal compatibility (iOS, OS X, Windows and Android OTG devices) and the sound quality make it a solid option with great value.

Despite some niggles (no power adapter, short cables, input knobs not easy to operate, especially in low-light), at $199 the iRig Pro DUO packs an impressive list of features for two channels of high-quality recordings, ‘on-the-move’ or in the studio.
I’m looking at you, budget conscious singer-songwriters, podcasters, producers that don’t need more than two channels – check it out and let us know!

Where to buy?
Support ANR buying the iRig Pro DUO through one of our partners. That’s the best way to attract good karma!