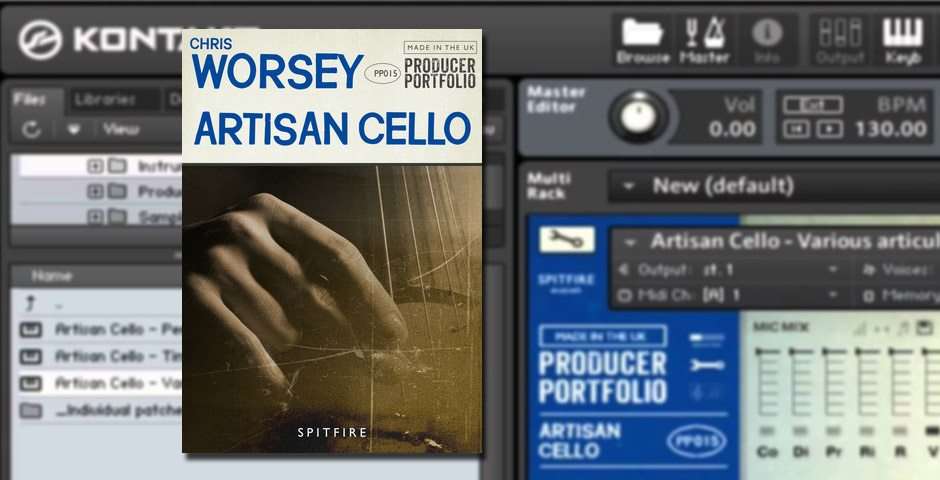 Spitfire Audio has created another solid contender in their character-laden Artisanal Series, this time with Artisan Cello for Kontakt 5.
The Artisan libraries are recorded in Spitfire Audio’s purpose built dry studios.

With almost 14GB (uncompressed) of samples, they’ve gone to great lengths to provide a remarkable level of detail via several formidable signal chains.
They’ve chosen to capture the nuances and idiosyncrasies of a well known and expressive London player, Chris Worsey (rather than a “perfect” but sterile performance), in addition to the sound of a unique instrument and impressive selection of mics.

It’s not the tool for precise control over every detail (particularly with regard to vibrato and volume envelope) but it excels at just sounding great, and in many cases by exploring the available options, you can find something that works.

The sounds themselves are fantastic, but there’s room for improvement in the UX and functionality of the Kontakt instrument, as well as the documentation.

Details
There are three main Kontakt instruments (performance, Time Machine, and Various Articulations), plus individual patches for each articulation. I’ll explore their details individually, but first a few thoughts about the library overall.

My favorite feature, from a mix perspective, is that (for all instruments) you can blend any of 6 different signals (5 close mics + room mic) that were all meticulously recorded in a relatively dry room. The close miking really brings out the signature of each mic and the detail of the playing, complete with finger and bow noise, and beautiful overtones. I like the valve (default) as the best overall, but, especially for lower notes, I prefer the dark, throaty richness of the ribbon. Using mics instead of plugins for timbre adjustment is refreshing. (Note that if you add a new mic, you need to retrigger the note before you can hear it.) The differences can be more or less depending on the range, articulation, and type of passage you play, so your mileage may vary, but take some time to explore these. Turn the onboard reverb off to hear the differences the most.

Overall the UI is relatively clean, but (if you are not familiar with Spitfire Audio’s interface) there is some deep functionality behind many of the menus or icons, so be prepared for a bit of digging to unlock all the features.

On any of the sustained notes, vibrato gradually blends in with no direct control over how long it takes to come in, the intensity, or rate. I found being tied to this phrasing to be frustrating at times. That said, since all the vibrato is actually played (vs. artificial LFO based), it sounds very convincing. Enable any of the deep round robin options to make it even better.

*Performance: This is a good starting point for digging right in, getting a feel for the instrument, and playing basic melodic lines. However, controlling legato is finicky. Only a very narrow range of velocity will trigger legato notes, and it gets even more touchy in polyphonic legato mode, with seemingly random other articulations coming in. (Overall my least preferred instrument.)

*Time Machine: It consists of the short articulations (Pizzicato, Spiccato, etc.), with a Stretch parameter that varies the length of the note. I found it most useful to assign a physical knob to Stretch in order to control it while playing.

The round-robin modes are especially effective at imparting realism on the repetitive passages that are common with these sounds.

Time Machine also includes Ostinatum, which is like an arpeggiator with control over the length and velocity of each step. Unfortunately, it didn’t work very well (only one note or chords would play, mode menu broken). This isn’t a huge deal, since there are better tools for this technique (such as the Arpeggiators in Logic or Live), but it would be nice if it worked.

In Time Machine, dynamics is, by default, controlled only by velocity (i.e. not mod wheel). This makes sense if you play the lines manually, but if using Ostinatum or another automatic rhythm generator, it can be helpful to toggle CC Mapped Velocity so you can change the dynamics of a rhythmic passage via Mod Wheel in real-time.

*Various Articulations: This is my favorite, and by far the most versatile instrument. It includes all the articulations, and these can be selected via keyswitch. It’s helpful to have at least a 61 key keyboard, or a separate keyswitching controller to have access to the full range at all times. This is the mode in which I could play most expressively, with the most intuitive control. There are some especially tasty harmonics and bow noise that leap out in the long articulations here.

Room for improvement
While the walkthrough video is well done and helpful (see below), the text documentation is lacking. They use a phpBB, and recycle some of the text and pictures from other instruments in the series, so parts are not completely accurate. Broken picture links and limited searchability didn’t help either.

Looping on sustained notes is not smooth. This can be covered up some by additional reverb, and you can kind of fake re-bowing by automating the dynamics, but it’s less than ideal. I’ve also noticed occasional tuning discrepancies, though they only really revealed themselves when sustaining multiple notes.

A tip
Turn down the internal verb and use your preferred FX. The strong dry samples with all of their inherent variations and detail are enhanced through any interesting reverb or delay.

Conclusion
Artisan Cello is a unique instrument that offers a rich sound and performance, plus inspiring multiple mic selections, all of this at a quite affordable price.
The instrument may not be the best for legato or long sustained notes. Also, pre-defined volume envelope and vibrato can be limiting.
Despite the shortcomings we mentioned (that may be fixed in the next update), if you’re looking for a solo cello sample library with character, Artisan Cello should be on your list. Make sure to check out the demo tracks on the official website.