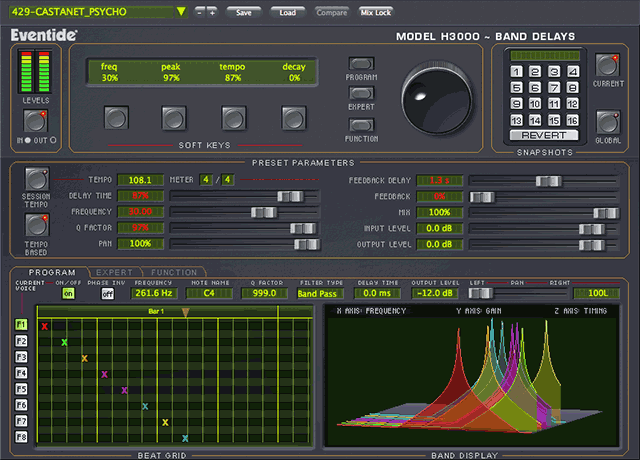 If the recently released Anthology X bundle is too much for you but you would still like some of that magic in your tracks, Eventide got you covered.

They just announced the release of the H3000 Band Delays plug-in for AAX, VST, and AU. This unique multi-effect plug-in, originally included in Eventide’s Anthology X bundle, is on sale for $99 until December 31, 2015. (Normally priced at $199.)

Band Delays is one of the ‘secret weapons’ of the timeless Eventide’s H3000 Ultra-Harmonizer thanks to its ability to create sounds never before possible. This plug-in version carries this legacy forward.

It can dice and slice your tracks in both time and frequency, creating up to 8 distinct voices defined by frequency, resonance, filter type, delay time, volume and panning.

The cool thing is that EACH parameter can be automated and manipulated in real time via MIDI. Just plug in your controller and play the Band Delays plugin like an instrument.

Sounds too complex for you? No worries. Band Delays comes with 80 presets that offer a wide-range of starting points.
A fully functional 30-day demo version is available. Also, no iLok dongle required!