Only very few companies can pride themselves on having shaped the sound of modern music as we know it. Eventide is one of them, from their H910 Harmonizer released in 1975 to timeless classics like the H3000, up to ‘contemporary hits’ like the stompbox line and software plugins (formerly available only for ProTools and now for native platforms as well).

As you may remember, a few weeks ago Eventide has released Anthology X, a collection of 17 mixing, mastering and multi-effect plug-ins based on 40 years of studio mainstays like the H910, H949, H3000 Factory, Band Delay, and Omnipressor.

I know, it’s not really a scientific description, and it may sound like an ad,  but in my opinion Anthology X is a godsend for any serious DAW user. You know those times when you are working on a track and you feel like it just needs… ‘something’? That’s when some of these plugins can help.

To me, adding some lush Ultraverb tails, a touch of H3000 or Octavox wizardry (not to mention the retro charm of an H910 or an H949) means in most cases taking the track to a whole new level (or at least spark some new ideas!).

This is why we felt it was the right time to ask some questions to Dan Gillespie, Sr. DSP Engineer at Eventide. Dan worked with the New Jersey company since 2002. He also makes music (in Grand Electric and as Transit161).

– Welcome to ANR. Dan. Anthology X is a curated selection from Eventide’s impressive plugins catalog. You’ve been working on them since approx. 13 years now. What plugins are you most proud of and why?

DG> I guess that’s kind of like asking which is your favorite child. However, if I had to pick it would probably be UltraReverb. When I was first trying to break into this business my number one goal was to make a reverb people would actually use on records. I was very lucky that I was given the opportunity to do so with the Eventide Reverb plug-in my first year on the job, and I’ve been very humbled since to have people I really respect tell me that it’s one of their favorites. When we ported it to Native it was also really rewarding to tune up the small things that bothered me after 10 or so years of using it. Like many of the plug-ins in Anthology X I really feel like it’s finished after all these years. 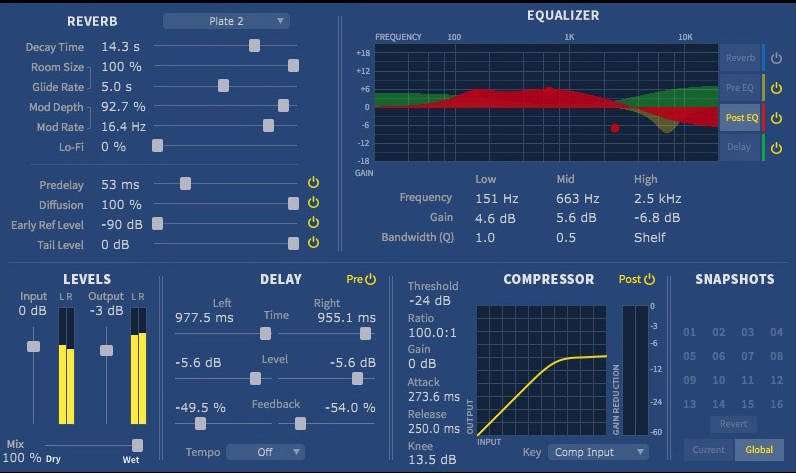 -When I work with quality plugins like the ones from Eventide, Soundtoys, UA and a few others, I can hear a certain ‘magic’ going on. I think it may be due to a more detailed analysis of the original items (speaking of modeling), down to the actual converters/outputs that IMHO always added some extra flavor to the actual sound. Can you shed some light on this process?

DG> I think what you’re hearing is two things, a lack of undesirable artifacts imposed by the processing itself, and, often, an inclusion of desirable artifacts either from the original (if modeling), or intentionally imposed by the algorithm designer (if novel). Modeling is sort of the easy case, because if you model the right products you already know people like the sound, and it’s just a matter of accurately identifying and recreating the desirable artifacts in a way that doesn’t introduce the undesirable ones. This can be a rewarding engineering problem, but I often find it just as rewarding to chase a sound in my head and really nail down something new that to hear. Either way, I think what makes it sound great is that you stake your reputation on making it sounding great, and that forces you too follow through and not ship something that’s halfway done.

-I like the fact that, in some of your most recent plugins, you have switched towards a more modern and less hardware-like interface. What’s the feedback you got from your users after that? Do you think we’ll eventually get rid of those awkward analog-looking knobs?

DG> Some people really like it and others really hate it. I don’t think knobs are always bad, but I think what’s most important is putting the shortest path between the users hands and ears, so that the users focus is on the sound and not making sense of the user interface. For UltraReverb and Octavox, we did this by flattening the UI to remove visual clutter, and in the case of Octavox, using color and shading to show the mix of voices. However, for the new H910 we felt it was important to stay very true to the original hardware. Since we were modeling a real piece of hardware, I don’t think it would serve users well to flatten that interface and remove that perspective. 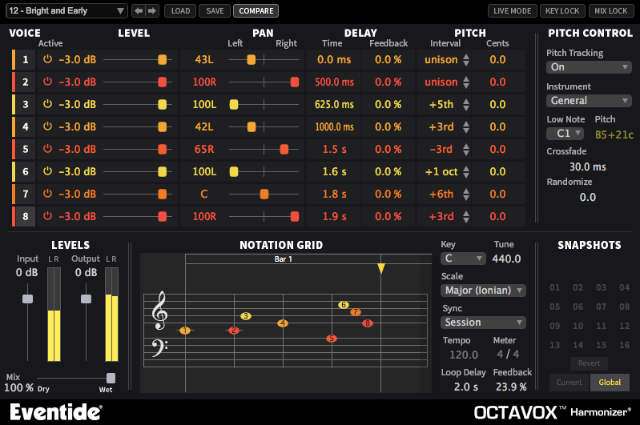 -The reason we didn’t get some of the most complex H3000/H8000 sounds in a plugin form (yet)  is due to a strategic choice or rather to technical limitations?

DG> The H8000 has 1800 programs, and because it’s a modular patch based system, each of these are technically their own algorithm. The box is so deep that after 13 years of working regularly with it, I still find new things. It’s hard to imagine how best to create a plug-in of that scale which would give users a rewarding experience. What we have done, and I think successfully, is the Blackhole plug-in. Here we took one preset which started in the DSP400, extended it a little to cover a larger breadth of sounds, and turned it into a great, usable, plug-in.

-You worked on both hardware (stomp boxes) and software products. Do you have a preference? And when you make music, do you gravitate more towards hardware or software Eventide products?

DG> I enjoy both hardware and software product development, they each have their challenges and rewards. For my own music, I tend to use whatever I’m not working on professionally. In other words, if I just spent all day writing plug-ins and testing on various DAWs I’m more likely to play my modular or drums. If I’ve worked all day playing guitar, I’m more likely to open a DAW for fun. It’s a nice change of pace. 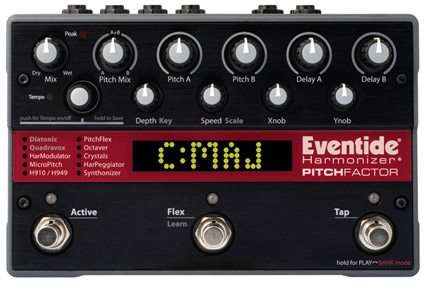 -Speaking of Eventide pedals, I find it a bit funny that they are always associated with guitar players (see the majority of promotional videos), while I think they are an excellent tool for keyboard players and sound designers as well. I know you’re not a marketing guy, but what’s your take on this?

DG> I think a lot of electronic musicians are using our pedals and Eventide has a rich history in electronic music via Suzanne Ciani, Laurie Spiegel, and many others. The pedals were also designed with line in and line out levels, midi, and we regularly ran synths through them during algorithm development. I think if the marketing has been heavy on the guitar side of things, it might be because this was the market we were working to break into at the time. I’m sure we would entertain more coverage of electronic musicians using our products and would love hear from any who are doing so.

-Do you have any advice for aspiring software engineers who have ideas forming, and want to start creating the ultimate plugin?

DG> A lot of people will tell you to find a problem and solve it, but I don’t think this is always the best advice. If you’re making products for musicians they are often not looking to solve problems, they’re looking to be inspired to create music. If you design a product that helps them achieve new sounds, go down new paths, or just inspires them to create, they’ll love you for it. I think that’s something Eventide has always been good at, and something I’ve learned over the years.

-Is there a particular Eventide product of the past you would have loved to be involved with?

DG> I feel very blessed to have contributed at least a small something to all the DSP products Eventide is currently making. And most recently, working with Tony Agnello on the DSP models of the H910 and H949 has been incredibly insightful. It’s been revealing to hear the problems he faced and the solutions he chose in a development environment very different from me working on a laptop. It would have been interesting to be a fly on the wall during the development of the SP2016, which was Eventide’s first modern digital multi-effect, in the sense that it was a vanilla box into which you could write algorithms, rather than the algorithms being integrally connected to the hardware. That said, I’m most excited about Eventide products which are yet to come.

-How hard is it for a “classic” company like Eventide to keep being on the bleeding edge and come up with something innovative, rather than just rest on its laurels?

DG> I think the legacy can be a great benefit, but does come with a small price. The great thing is, if we release a new product it’s not difficult to get attention and people will give it a shot. Additionally, the legacy is a great reminder for a developer to make things great, and I often tell new hires that Eventide gear sounds great because it has to, there’s no excuse for releasing something sub-par.

However, users do expect a certain genre from Eventide and like a classic band we’re often asked to, “play the hits”. However, if that’s the least of your problems you’re doing pretty well. I’ve also always had great support from Richard, Tony, and others at Eventide to try to keep pushing new ideas into the products we’re making and move the technology forward, and even a push to do so when I may have needed it.

-How do you know when something you are working on is finished?

DG> That’s easy, it’s usually finished when I can’t stand to listen to it for one more minute.

-A mistake you’ve made at work, that turned out to be something cool you decided to keep for that product you were developing?