I am not obsessive when it comes to sound quality. I do not get into debates over the quality of different audio formats or what speakers sound better. I try not to get caught up in the details. I just want to enjoy the sounds of the music.
That’s why I decided to take a non-bias (no pun intended) approach when reviewing Positive Grid’s Bias FX app for the iPad.

Comparing the real effects or amps to what the app was attempting to model was not my intention. I just wanted to see if it could produce sounds that were pleasing to my ears. One thing I did not want to do is another review of it being used with guitars or bass. I wanted to think outside the box. So I tested it with several synth apps to see the results, which I will discuss later. For a guitar player, this is a no-brainer purchase but for a synth guy, is it a good purchase. Let’s get some of the basics out of the way before we dive in.

Basic Features
Bias FX is a guitar amp and effects processor for your iPad developed by Positive Grid Inc. It comes with 12 classic amps, 25 effects pedals, and five rack processors. Additional effects and rack processors can be purchased inside the app (among these I’d recommend the Studio Racks Pack with classics such as the LA2A® Compressor, PSA-1® Preamp, Manley® EQ, Echoplex® and Dual Spring Reverb).
The amps can be fully customized by their other app Bias Amp, giving you full control of your sound. It also allows for IAA effects to be placed anywhere in the chain. You can split the signal and either switch between or combine them to shape your sound even more.

MIDI Updated
In its most recent updated, it added full midi support to include MIDI learn. All you have todoislong press on a control and you will get a MIDI learn option. Simply touch the click to learn MIDI option, move a knob or slider on your MIDI device and you are controlling the app. You can also move the slider to specific MIDI CC number if you wish. I found this useful when programming apps like Pro MIDI or Genome that can send MIDI CC messages, allowing you to automate the parameters. One complaint about the MIDI is that although you can select the channel that it is receiving MIDI from, you cannot select a specific device. This means that unless you route the incoming MIDI with an app like MidiFlow or MidiBridge, the app will listen to everything that is being transmitted on that channel.

The sound
I mentioned earlier that I was not testing this with a guitar. I am testing it with synths and other apps on my iPad. I used a variety of apps to include iM1, Photophore, Thor, Figure and Borderlands. I wanted to give a wide range of sound test examples in order to give you the opportunity to judge the sounds it can enhance.

I have a variety of samples from leads, bass, pads, chords, and to some granular, which you will hear in the Monty Python track. Below you will find a Soundcloud playlist with the sample sounds.

In each track, the first sound you hear will be the without BiasFX and the second will be with BiasFX. I will continue to update that playlist with more sound examples as I continue to dive into this app. Also, I only used the stock effects and amps that came with BiasFX.

The Amps
When using the presets, I did find it hard not make some sounds from synths sound like a guitar. I guess it is just the nature of using a guitar effects and amp modeler app. It was mostly from patches that modeled real instruments. I found that using a bass amp with synths gives a good clean sound and can enhance the low end of a patch; especially in a bass patch. You can just adjust the bass knob and use it like a filter to dial in on a sound. I demonstrate this on the Figure Bass Knob Twiddling track. The Acoustic Amp was really nice for plucky type sounds, giving them a little extra twang if you wanted. I tried out a few other amps but they all seemed to color the sound a little bit to much for my taste, adding extra gain when it was not wanted.

The Effects
As I mentioned earlier, it comes with 25 effects and five rack processors. Although I tested most of them, I will elaborate on a few I thought really stood out for synths. The Red Compressor seemed to be the one I went for most. In my opinion, it did the best job leveling out the signal. I used it with most of the presets I have created. I used the Tremolo on a few presets. When using it with pad sounds, set the speed low and the intensity to about half way. It can create some slow fading in and out, which can add more dynamics to a pad sound.

I felt the EQ was another must have in most presets, especially the 10-band. Once you have some of your other parameters set, put the EQ in the signal chain. What helped me learn a bit was to have a loop playing and drag all the faders down. Then start slowly raising them up to the appropriate level. You will begin to notice how different frequencies affect the sound. Plus you can EQ out some unwanted, harsh frequencies that some synths can create. There are two other EQ’s and they are basically the same with less control over the frequencies.

One cool feature is the ability to split the signal into two different effects chains. I added a Tape Delay on both chains with slightly different delay settings. At the end of the split you get a mixer where you can adjust the levels, pan, and delay the signal. This allows you to pan each signal, and with the delays enabled it creates some nice stereo effects. The distortion pedals all have different qualities and characteristics. I did try out a few on some synth leads. I noticed there is seems to be a fine line between synth leads and guitars once you start adding in a lot of distortion. It is especially noticeable if you use a patch that models a real instrument. The distortion does allow for some really dirty synth patches. 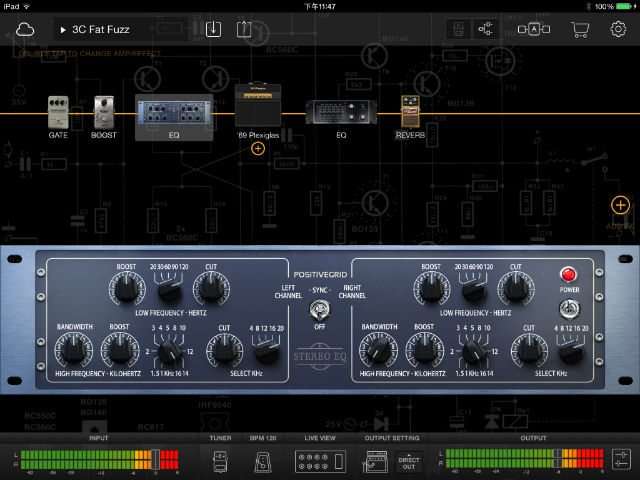 Conclusion
So far I have really enjoyed Bias FX. It has forced me to dig in and learn a little more about each effect and how to use them.

A few tips I have picked up on, it is easy to clip your audio so make sure you check your levels often. This may require several gain and volume adjustment from your guitar, synth, interface, or inside the app. I did notice some pops a few times when using it with my acoustic guitar, I quickly replaced the cable and the pops stopped.

I would recommend this app not just for guitarist but anybody into sound design or wants to add some different flavors to your synth patches. You can make some really warm, interesting or inspiring sounds when using it without your guitar.

Price
Bias FX is currently for sale at $19.99.
Heads-up: Bias FX is also available for Mac and Windows operating systems, check out the official website for details.