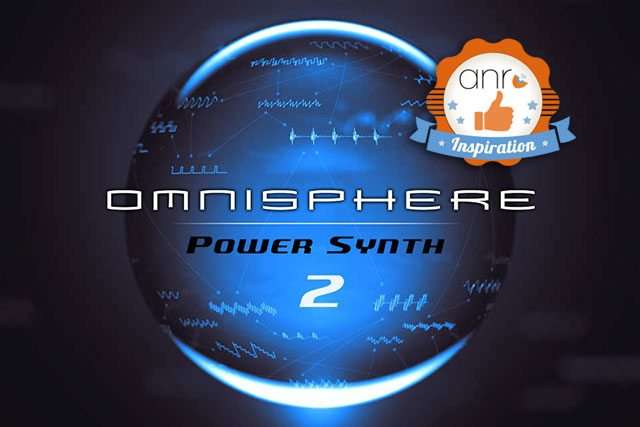 Cons
-Some presets are way too loud

These are great times to be a musician. There’s so much choice – you can opt for an analog modular rig (which in a way is like becoming an alcoholic!), pick some great software synths, cool sample libraries, and possibly something else in between.
But especially if music pays your bills (or if that’s your goal), today more than ever you’ll need something that gets you quality & quick results.

Ommisphere 2 to me is exactly that, and then some – a rock-solid, inspiring ‘archive’ of top-notch sounds, ready to use and yet highly customizable and creative.

It took Spectrasonics 7 years to release a follow-up to the original Omnisphere. Was it worth the wait? I’m going to find out, with the help of two renowned sound designers.

New features I love
It would take days to go through all the new features, but let me point out what caught my attention while testing Omnisphere 2.

The original Omnisphere was for some users ‘just’ an excellent collection of presets, somehow too easily recognizable.
Well, the presets are still there (along with thousands of new ones!) but the guys at Spectrasonics worked hard to make Omnisphere 2 as ‘unique’ as possible.

How? The first thing that comes to mind is the possibility of adding user audio files, up to 24-bit 192kHz resolution. I had great fun using this new feature, it is ideal when creating ambient sounds (especially when used together with the Granular engine). I think this is a feature that would deserve more visibility in the interface (right now it’s kinda ‘hidden’ in the contextual menu).

Note: if you want the audio to loop after importing it in Omnisphere, you will have to use an external audio editor (i.e. Audacity, Sony’s Sound Forge Pro, Steinberg’s WaveLab, etc.) to embed the loop points in the audio file before importing it.
A full-featured audio editor inside Omnisphere 2? It may be helpful in my opinion, but it’s not going to happen. As stated by our sources at Spectrasonics, “we don’t plan to, because Omni 2 is a synth not a sampler”. 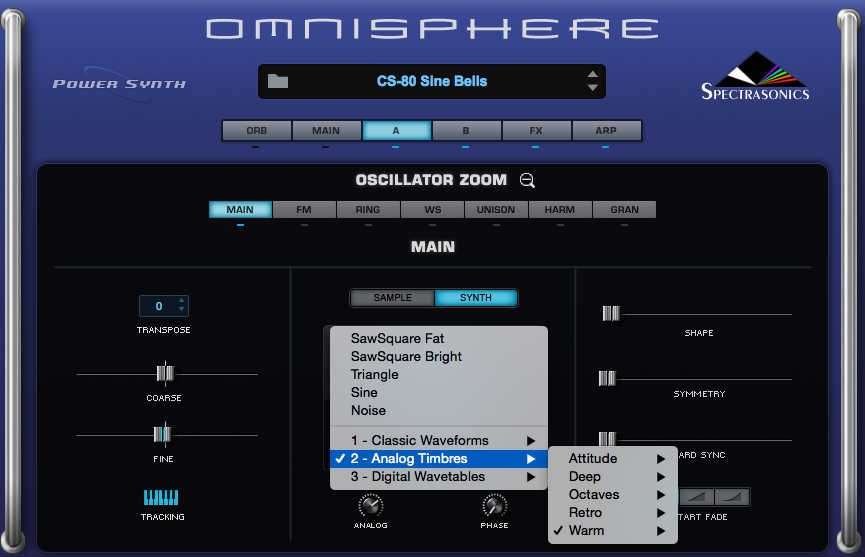 The mix of new and old features makes it so easy to re-shape the DNA of the preset you’re working with.

I was fiddling about with some simple CS-80 style bells. It sounded nice, but I felt like taking it to a more contemporary level, so I’ve started using the wavetables feature, then added some analog drift, a pinch of Harmonia (already there since Omnisphere 1.5), a little touch of Waveshaper and some crazy texture, courtesy of Innerspace and voilà… a radically different sound!

Other new features like Sound Match and Sound Lock make Omnisphere 2 more productive than ever. You like a certain patch and would like to find something similar in the database? Just click on Sound Match and the list is ready for you.

Eric Persing & co. must have spent lots of time tagging and describing each sound, and the result is definitely much appreciated. 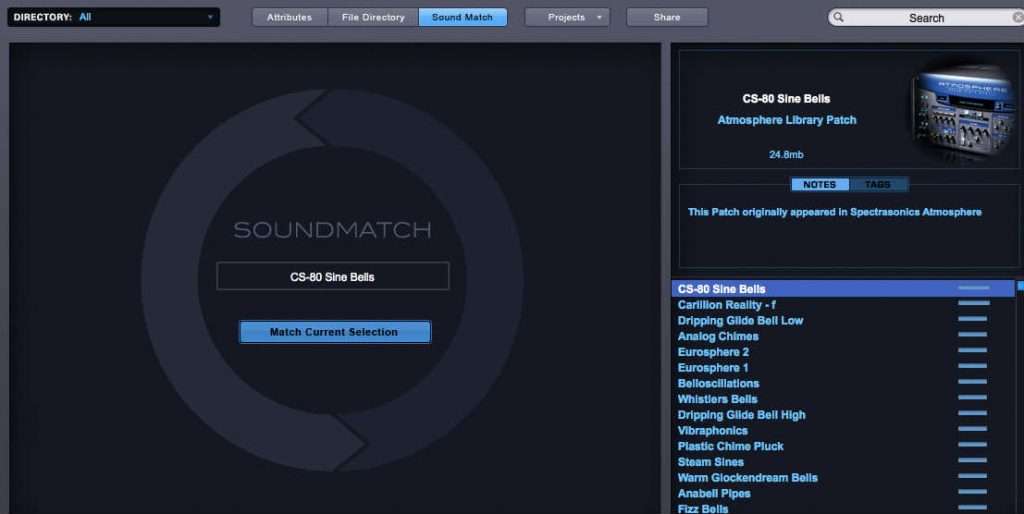 Let’s say you find a patch with a cool arpeggiator but you feel like the sound is not exactly what you have in mind. Sound Lock gets you covered.

It allows you to retain certain aspects of a preset – i.e. the Arpeggiator, the Mod Matrix, etc. – so you can browse through other patches without losing the sound features you like in the current patch.

Also helpful, the Soundsource reversing – ti htiw sdnuos looc yllaer emos teg nac uoy, oops I meant “you can get some really cool sounds with it! 😉

New sounds
We’re talking of more than 4500 sounds, that cover a huuuuge sonic palette. My favorites are the most organic sounding and experimental ones, which include psychoacoustic, custom-built instruments (thumbs up for Diego Stocco creations here!) and some crazy sounding circuit bent stuff.

All of these sounds also have added life via the improved granular synthesis engine. It’s a real re-work of the version in the original Omnisphere. It’s particularly entertaining to use in tandem with the new phrase samples. The phrases have been added from classic Spectrasonics sample libraries such as Voices of Africa, Voices of Asia and Vocal Planet. You can use them in the granular engine to focus on and manipulate small fractions of sound, or use the LFOs also to move through the sample. 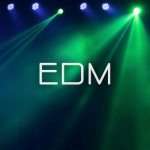 Honestly,I could do without the new EDM sound bank (also unnecessarily loud!). Given the embarrassing EDM trend though, I can understand why Spectrasonics couldn’t help but include it.
As they told us “we wanted to make sure the EDM folks either had some readily available sounds to use, but also that folks who make their OWN patches for EDM could get a sense of what Omni 2 can do – it’s not ‘just for film composers’! One of the total misconceptions of the product because it gets so much use for scoring…”. Amen.

Omnisphere 2 in the words of sound designers
We’ve asked two top Omnisphere 2 sound banks designers, The Unfinished and Luftrum, to share with us their thoughts about this new release.

The Unfinished: ‘For me, Omnisphere 2 is an absolute essential for the studio. There’s nothing quite like it for the sheer breadth of sound one piece of equipment can achieve.
There have been a whole host of upgrades from the original version, all of which are extremely useful. One of my absolute favorites, as a synth programmer, is the expanded synthesis section.
There’s a wealth of new waveforms to play with, many of them taken from classic gear. This provides a great richness of tones as there really is a very broad range now.

When it comes to sound design, there are also now even more samples to choose from. Various new areas have been explored and two of my favorites are the samples that Diego Stocco has produced, and also the circuit bent stuff. Diego is an absolute genius. He creates his own instruments and has sampled some of them for Omnisphere 2. They are an absolute joy to work with. The circuit bent sounds are taken from cheap home keyboards and modular synths, and they offer some extraordinary noises.

There are also some new effects to enjoy. My favorites are Innerspace (that uses the ‘concept’ of convolution reverb, but isn’t reverb: instead of a ‘space’ it uses other unusual and unique sound recordings to layer/morph the sounds put through it) and also the new amps. The amps aren’t just about distortion; there’s some real tone-shaping stuff in there too.

Finally, it’s not all about the new stuff! There’s still some old tricks to get more use out of – especially when playing with the new sample content. I’m a big fan of fiddling about with the timbre shift fader or switching it over to the Crush setting, especially on drum sounds.

I have been digging deep over the past few weeks creating a huge new soundset collection for Omnisphere 2 that will be out in October, which should be a real treat for film and TV composers, and I feel that there are still a multitude of options that I haven’t yet explored properly. It’s a beast!’

Luftrum: ‘I have been working on Omnisphere 2 to create , a sequel to my flagship soundbank Luftrum Ambient.
Omnisphere 2 is without a doubt the most comprehensive synthesizer on the market right now – it’s really in a league of its own. It’s not only every sound designer’s wet dream it’s also very bug-free and stable to use.

Stability is important and so is CPU usage which is far less than I first expected. I designed Luftrum Ambient 2 on my new Mac, transferred it to my slower and older PC to test for functionality and CPU spikes but surprisingly, I had no trouble playing the sounds on my old PC workhorse – considering the power-synth it is. That alone left me rather impressed.

To some degree, I also think owning Omnisphere 2 is like being major synth spoiled. I mean, so many options and choices, too easy to program and always just sounding good.
I have never worked with a synthesizer containing such a vast, high quality and original library of samples. I love the various psychoacoustic and creative sound sources and everything by Diego Stocco, he’s like the mad genius professor in his own field.

The new update to Omnisphere 2 has a nice Publish Library feature which is a refined way for easily exchanging soundbanks, allowing third-party sound designers as myself to create a 1-click installable soundbank in just one .omnisphere file, containing all the patches and multis. 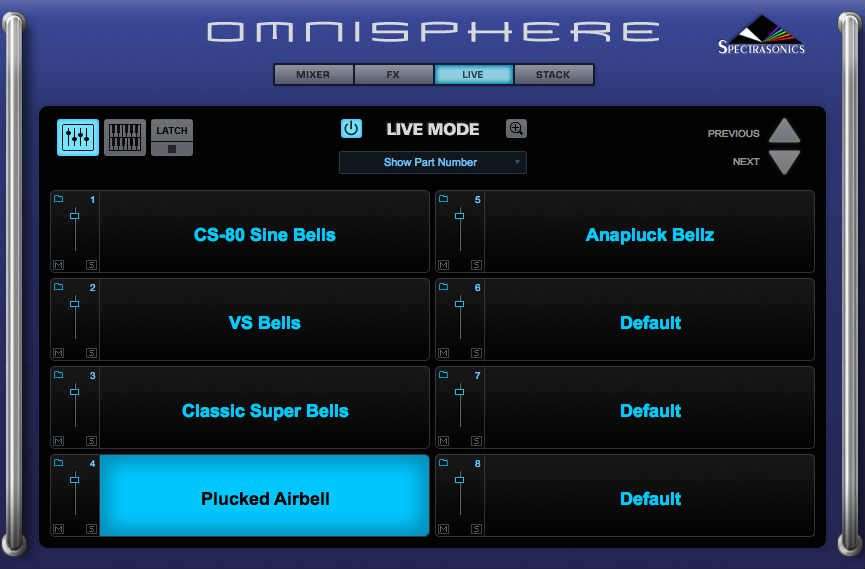 Where Omnisphere 2 really shines are within the multis.
Multis are several single patches that can be layered in different ways, like the live mode or the stacked mode, where you can layer, split or crossfade between patches across the keyboard, for instance, a lush deep pad in the lower keys, an arpeggio in the middle and the airy choir on the upper keys, and it’s really intuitive and easy to use just click and drag. With the combination in ways of combining sounds through different layers, I found what I consider my synth synergy counterpart. That’s why in the Multi section of Omnisphere 2, I have created what I consider some of my best work ever.

The future of Omnisphere 2? Well, in my imagination I could wish for a spectral resynthesis engine that kicks Kyma’s behind. Imagine being able to spectral morph between two or three samples with different velocity layers across key range, morphing from an ocean wave over a flute to a female vocal without really noticing where one begins and the other takes off? I predict spectral morphing will become the future mother of synth algorithms for the creation of new hybrid sounds.

I could also wish for a more straightforward granular engine with an interface like Padshop Pro, where you can visualize the sample itself, the grains, the spread and the speed across the sample being granulated. That’s probably more a matter of taste and personal preference. Omnisphere 2 is amazing as it is…’

Conclusion
I couldn’t have said it better. Omnisphere 2 is simply amazing as it is.
At $499 ($249 for the upgrade) it may not look cheap, but given the huge amount of work behind it, the unique sonic palette and the time (= money) you’ll save using it, it’s a tool that any musician/composer/producer should consider adding to his shopping list. Highly recommended!