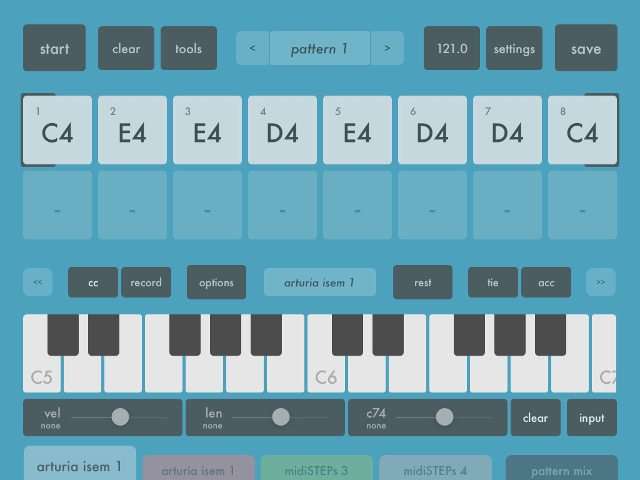 Roland SH-101 Inspiration
Created by Art Kerns, the developer of FunkBox and Little MIDI Machine, MidiSTEPs brings a refreshing and simple take on step sequencers. It is loosely based on the Roland SH-101 as far as its simplicity goes but then added some more advanced features. The developer did a great job at hiding the more advanced features. It keeps the interface simple and clean but with a couple of taps you can bring up the other options.

Basic Features
MidiSTEPs is broken into 4 parts. Each part has independent midi out settings, giving the user the ability to control 4 different synths. Each of the parts can then be divided into 16 different patterns. Each pattern can have 64 steps. Each step can hold a single note or several notes to make chords. Using the on-screen keyboard or an external midi controller, you can enter notes into the steps. You can also add in rests, you can tie notes together, and accent different notes.

Getting Started
To get started, open up the MidiSTEPs app, open up a synth you want to control, and make sure the synth is set to receive from MidiSTEPs. Once you are back in MidiSTEPs, tap on the middle button above the keyboard labeled midiSTEPs 1 and select the appropriate synth.

The MIDI options are implemented really well and it is easy to point the app at different apps or channels. Now that you have them connected, simply tap on a few notes and watch it populate the steps. Press the start button at the top and let the sequence play.

Once you have a sequence playing, you can tap the options and bring up additional settings for that particular part. It seems that the options affect all patterns within a particular part. If you decide to change the length of the notes or the speed for one pattern and jump to another pattern within the same part, it will use the new settings.

This also works if you want to add an accent, tie it to another note or automate the length, velocity or a cc message, which we will cover next.

Automate
In addition to notes, users can also automate the note length, note velocity, or a CC message on a step-by-step basis. If you tap the CC button, it will bring up 3 sliders that can be used. Each of the sliders has options for length, velocity, or CC. So you could automate up to 3 CC messages per step. I think this is a brilliant feature although I would have like to see the ability to automate the CC messages in a more fluid way as opposed to doing it per step. Although this could lead to some interesting wobbles and quick parameter changes, it lacks the ability to slowly change a value from 0 to 127. This could be done, but it would take a bit of time to do it on each of the 64 available steps. 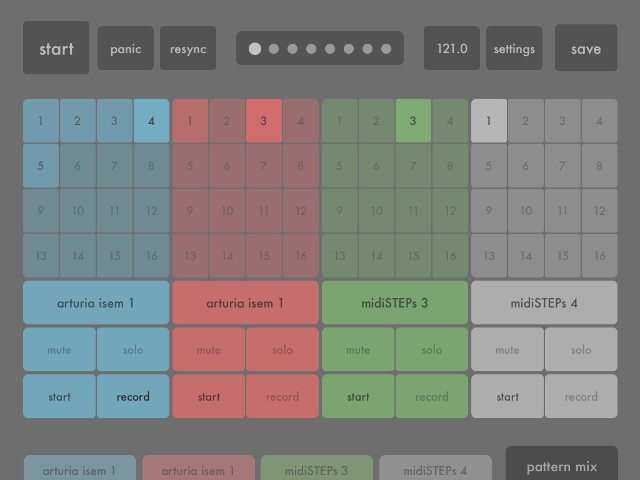 Pattern Mix
It features a pattern mix page in which gives you an overview of all 4 parts. The basic mute, solo, start and stop are present along with a few other cool features. It also features a MIDI panic button, which is helpful.

Tools for Notes
On any of the part pages, if you tap the tools button, you can edit the steps in the pattern as a whole. Shift them left, right, move up and down octaves, and fill the pattern with random notes among a few other options. The developer has created a very well written manual that can be found on their website http://artkerns.com/midisteps.html. My only complaint about this section is that there is no global way to set a certain scale. So if you chose the random fill, it fills the steps with random notes and octaves that are not based on any particular scale. In the future, I would like to see a way to set a global scale.

Final Thoughts
There is a lot more I could cover with this app, but then I would be almost rewriting its manual, already well written.
I would recommend MidiSTEPs. It has enough uniqueness and simplicity that it could easily find its place in your setup.
I found that it synced nicely with both Patterning and Loopy, both tempo and start/stop. This has me excited to try and set it up to easily loop some midi notes to go along with a live looping setup.