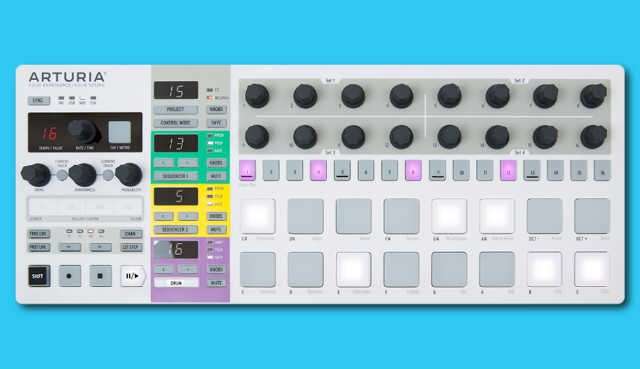 In case you haven’t heard about it, the BeatStep Pro is Arturia’s successor to the BeatStep – a do it all, multi I/O step sequencer positioned to be the heart of a rig, or at least a deep accessory to one.

Feel, Design & Features
The BeatStep Pro is a quality-feeling piece of gear, heavy and metal. The pads, though small, have good sensitivity.
They definitely put some thought into the design, with much use of color coding. Many, though not all, operations involve the Shift key, and not everything is immediately apparent, but it doesn’t take too long to figure out how it all works.

The manual is clear and well written, though a bit repetitive at times. There are many settings that just can’t be made from the unit itself, and so Arturia provides a PC/Mac application named Midi Control Center. This also allows backing up and restoring projects and individual sequences.
Surprisingly (at least to me), you can also use to software to actually edit sequences and program drums.

Speaking of features, they really went all out on compatibility (click on the picture below to zoom and see what I mean…)

The moment of truth
Really about the only obvious feature left out was polyphonic sequencing. And there is sort of a workaround for that.
So, (you are asking yourself) – does it do everything they claim?

At this point, my answer to that is “mostly”. A few things don’t seem to be implemented correctly, or at all, and there IS at least one function that many would find critical that is missing. But again, I have a workaround. Follow me…

One of Arturia’s goals in making the BeatStep Pro was to enable it to interface with practically any possible type of gear, from pre-MIDI drum machines to any computer with a USB port.
I’m using my BeatStep Pro through USB with a Win7 laptop running Live 9, which is sending MIDI out to a Korg M3 and Boomstar. Also, DIN MIDI is going straight from the BeatStep Pro to a Waldorf Blofeld.

Hands-on Fun
You can of course program this old school: select a step, turn the knob for that step to select a pitch, do the same for velocity and gate, move on to the next step, and repeat.

The pads also function as a keyboard. The knobs are endless encoders, so there is no way at a glance to tell what value they are set to. And since they can be adjusting various parameters, that wouldn’t be of much use anyway.

Arturia did come up with a clever solution for that though – just touch the top of the encoder, and its value is shown on the display.

Hook up a MIDI keyboard, and there are even more options. Hold down a step key, hit a note on your keyboard, and pitch and velocity are recorded for that step. Even cooler, the BeatStep Pro can record your (monophonic) playing live in real time.

Once you have the notes in place, it’s easy to start tweaking things. Transpose the whole sequence, either by hitting a pad on the Beat Step Pro, or by using MIDI input.

Select a scale and key, and the pitch adjustments you make from the knobs (only the knobs-it won’t rescale MIDI coming in externally ) will be constrained to those notes. Use the step buttons to turn on or off individual steps.

You can randomize individual sequences or everything at once. It’s fast and fun to come up with great sounding patterns. 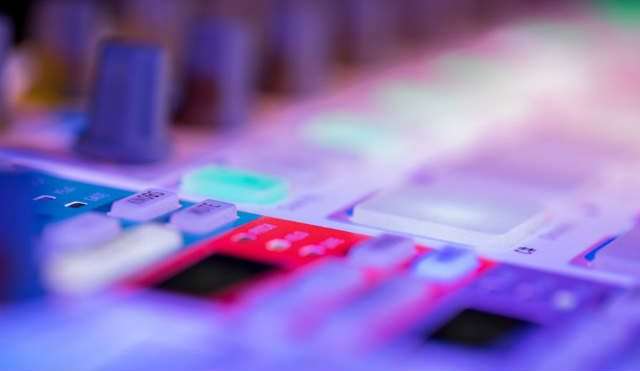 Sync Check
One of the first things I like to test when I’m integrating a piece of gear into my rig, is how well it syncs up with everything else.
With my setup, the answer is “very well!”. Using Live as clock source, I synced the BSP and Korg M3, using USB.
I set Live to send start/stop as well as clock.

I programmed a 64 step drum pattern on the BSP, with a fairly obvious fill at the end to make it easy to hear when the pattern was starting over. This was sent over a MIDI cable to the Blofeld, which was loaded with an 808 type patch. The M3 was playing a drum pattern as well.

Starting it all up from Live, I was able to walk away for several minutes at a time and come back to find both drum patterns locked up with no detectable drift.

Polyphonic Workaround
This is probably a good place to explain how it is possible to have the Beatstep Pro output a polyphonic sequence. The drum sequencer!
In itself, it is a 16 track sequencer. The pads are mapped using the Midi Control Center software, with several presets- chromatic, General MIDI, user specified.

By setting it up chromatically, the 16 pads give you over an octave. At any given step, you can program up to 16 notes. Not any 16 notes, only within the range you’ve mapped to the pads.

Still, it’s fairly easy, if a bit cumbersome, to input chords – just enable whichever notes you want, all on the same step. Probably not something most people are going to want to use very often, but it does work.

Limitations Or Work In Progress?
I do need to address some limitations of the Beatstep Pro though.
Some drum machines expect a separate MIDI channel for each sound- kick on channel 1, snare on channel 2, etc. The Beatstep Pro’s drum track is all output on one channel only.

I was able to work with that on the Blofeld in multi-mode without too much trouble, by setting every part to the same channel and then constraining each part to a key range of only the note I wanted to play that sound. Other gear that has less extensive options may require more elaborate methods- for example, an iPad app that can handle the remapping and rechanneling.

Conclusion
The BeatStep Pro can do a lot. Even if you only use pattern 1 in each of the two melodic sequencers and drum sequencer, with transposing, muting steps, and randomization, you can go really far.
If you’re into electronic music, the Beatstep Pro is an eclectic, affordable ($249/249 EUR) and inspiring tool that could take your setup to the next level.

If your budget is really tight and you have an iPad, you can have a look at some of the brilliant iOS sequencer apps out there (check our Modstep review!), but to me nothing beats the hands-on experience that pads, knobs and buttons can give you. Try the Arturia BeatStepPro for yourself and let us know.

Test by Phil Grossblatt, in collaboration with Fab