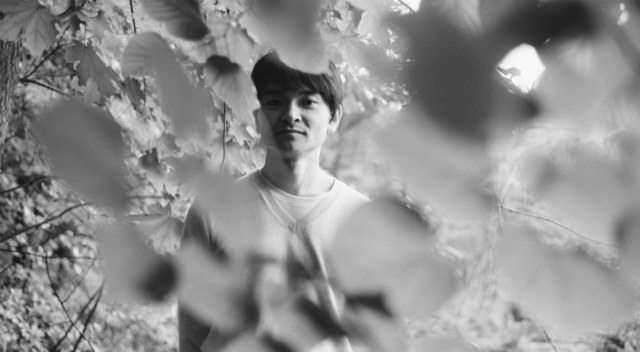 It doesn’t happen that often, but… when you follow a new artist for years, get to see many of his intimate shows and then you see him landing on one of the most renowned record labels (and getting raving reviews on Pitchfork & co.)… well, somehow your faith in the music business is restored.

This is exactly what happened to me and Masayoshi Fujita, a Japanese vibraphonist and composer based in Berlin.
Determined not to stick to traditional vibraphone styles or techniques, Masayoshi started to prepare his instrument with pieces of metal, strips of foil and other objects in the search for new possibilities with the instrument. The resulting new sounds help to expand the vibraphone spectrum without eroding the instrument’s intrinsic character.

‘Apologues’, his beautiful new release with Erased Tapes, sees Masayoshi for the first time use an array of instruments besides his lead instrument – such as the violin, cello, flute, clarinet, French horn, accordion, piano and snare drum played by friends, but arranged by Masa himself.

I thought it was the right time to ask Masa some questions about the new album, his influences and a few more things.

The new album is sonically close to your previous work, Stories, but boasts a richer palette of instruments. Was this your idea when you started working on the album or did you decide to add them at a later stage?

I already had the idea of using strings and wind instruments when I started to make these songs. In the last album “Stories”, I used strings on only two songs. It was a kind of try and test for me, and I liked arranging other instruments a lot, so I began to think to make more songs with more instruments.

In your music, I find a common thread that somehow reminds me of those late 19th-century Impressionist sounds filtered through a peculiar Japanese sensibility. Some years ago during an interview, R.Sakamoto said, “The kind of timbre or harmony I use may actually stem from a translation of Asian music by Debussy. I was born in Japan and became influenced by Debussy’s music – so, it’s kind of like we were influencing each other through the centuries”.
As a Japanese artist now living in Europe for many years, would you like to share with us how you see your own music and its influences?

In Japan, there are really a lot of things, like music, fashion, films, food and everything that are influenced or imported from western countries. I was a big fan of American rock since I was a small kid too. At the same time there are a lot of Japanese traditional culture and aesthetics remain strongly. And I was born and grew up there, so I think my music and aesthetic are influenced from those environments a lot. Since I moved to Europe, I became more conscious of the Japanese traditional culture or aesthetics because I feel I am very different here. Although I sometimes think of my cultural roots, I am not yet able to integrate it in my music, or rather I don’t feel like doing it yet.

It’s always difficult to tell about the influences from other musicians. I can’t really name one or two particular musician or composer who influenced me. I love a lot of different kinds of music like classic, electronic, rock, hip hop and jazz and so on. On the one hand, I think I have been influenced by all of them and, on the other hand, I feel I am not influenced by any of them.

What I try to do is to evoke images and feelings in the listener, and I didn’t start doing it influenced by someone. I have always looked for the music that has a certain mood, atmosphere or “world” in it and now I am trying to make it on my own. The images and feelings I have in my music are the things I have seen and felt in my life, mostly in Japan, that have been accumulated in me.

Stories and Apologues both explore the pure, acoustic sound of the vibraphone. In the past though, you’ve produced music (solo, as el fog, and with Jan Jelinek) that was heavily ‘processed’ and more experimental. Do you think you’ll keep working on similar projects?

Yes, I will keep making both acoustic and electronic, experimental music. I have been making electronic music since 15 years or so and I still love it. One part of me always wants to make electronic music. But now I am just more interested in playing and composing acoustic songs.
I do play gigs and make music with Jan time to time. I have some ideas of new el fog stuff too. I would like to work on new el fog stuff again in the near future.

Did becoming a father somehow have any effect on your music? After all, these could also be beautiful lullabies…

Yes and no. For the way of working, yes, but aesthetically, no. I have less time for music and other stuff now and it affects the way I work. But what I want to pursue and express has not changed, or it has changed slightly because of my age, but not because of having a child, I feel. My son is not really interested in my music. I guess it’s too boring for him.

I’ve seen many of your performances, but with the release of this record I assume things are going to be a bit different. What can you tell us about that? Will you be accompanied by a small ensemble?

Now I am preparing different set-ups for concerts, like a solo, with two strings or with a flute, violin and cello. If I have a chance to play with a bigger ensemble, I would love to try.

Speaking of collaborators, what’s your dream collaboration if you could pick one artist?

De La Soul or A Tribe Called Quest. That would be so cool!;-)

You can order ‘Apologues’ from the Erased Tapes online store.