Composer Cloud is a brilliant step forward. It seems like a win for both EastWest and their customer base to me, on many levels…

Cons:
– None really (unless you have a slow connection)

The guys at EastWest have taken a bold step forward in their product sales platform this year, with the introduction of Composer Cloud.
Composer Cloud is ostensibly a subscription service, where the customer pays a set amount a month and receives access to the cream of EastWest’s sample library crop.

What even is it?
If you’ve never encountered EastWest before – they are industry leaders in the production of very large, meticulous and detailed sample libraries, which cover a vast range of genre and instrument type. Their libraries have been used in the most cutting edge and grand scale Movies, Videogames, and Television over the last decade or so. East West was one of the companies I first used when I was fresh from university, stepping out nervously into the composition business.

The first library I bought was Symphonic Orchestra Silver. Ever since, I’ve regularly dipped into their vast array of libraries and purchased whatever I needed for the projects in hand. I now use the Hollywood libraries on most projects that require orchestration. When you subscribe to Composer Cloud, you have the Hollywood libraries instantly, alongside another 50 collections, with an unbelievable 9000 instruments at your fingertips, including:

For any composer worth his or her salt, this library collection will cover everything you need!

It’s an absolutely stunning collection of instruments that would set you back well over $11,000 were you to buy them separately. If you’re interested in what sounds these instruments make, rather than me taking forever to talk about them, I recommend you visit the website and listen to demos and watch videos. I’ll put a couple up here later as an example.

How does it work?
There are two subscription levels – Student and Complete, for $14.99 (limited to 7 libraries) and $29.99 respectively. Once your payment method is setup, an installation centre has to be downloaded, similar to many other providers of large sample libraries. From here, you can see how many days are left on your current subscription, what libraries you’ve downloaded, and if there are any updates to any of the software.

Also, it’s worth mentioning that there are no penalties, should you decide to stop your subscription (= risk-free!).
Trial? Yep! There is a free trial with 4 popular instruments in the first month and occasional exclusive instruments for subscribers only.

Here’s a video walking through the simple installation centre setup

All the libraries have been integrated into PLAY software – a standalone sampler that is customized for use with each EastWest library, and also as a plugin for every major DAW. In the past, I had some issues with the first couple of iterations of PLAY. But they have been smoothed out now and provide a solid foundation for all the instrument collections.

East West have collaborated with Solid State Logic in Oxford, and have come up with some excellent emulations of SSL hardware (best buss comp ever!) to boost the sonic qualities of the instruments as they sit in a mix. There’s also a mixer page for the large proportion of multi-mic libraries EastWest have. 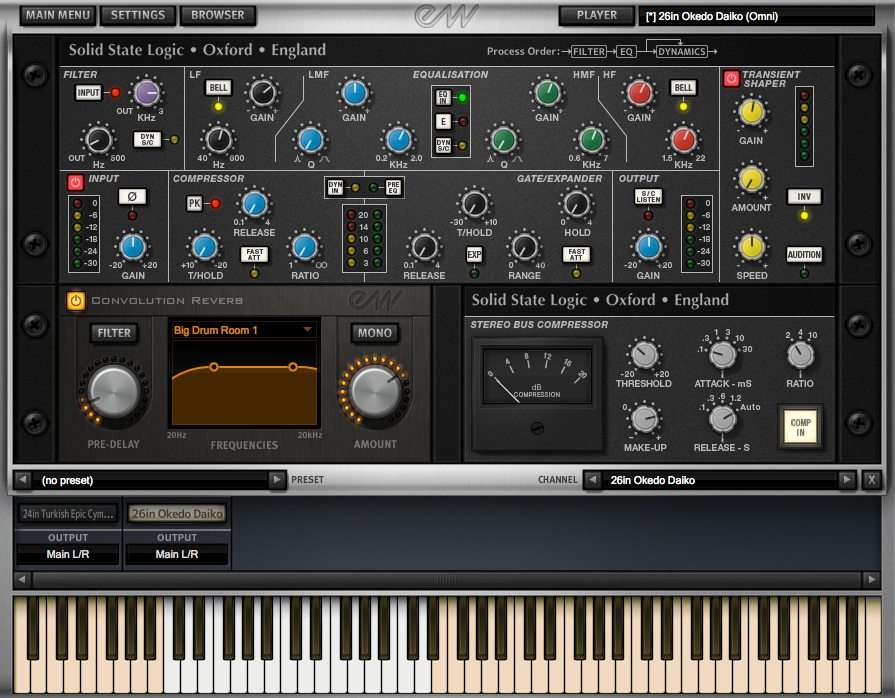 To try it out for myself, I downloaded a few of the library collections that I don’t currently own. Make sure if you’re wanting to download, you leave plenty of time. Like a night or two. If you can’t wait, there is an option to receive the whole lot on a hard drive, delivered to your doorstep.

I’ve owned the StormDrum collections since they began and have been impressed with their evolution with each release. Storm drum was the original library for the huge apocalyptic percussion that was used in every action movie chase scene in the early 2000’s, with booming Taiko drums and clattering Toms. I downloaded Stormdrum 3 and was loving the progression that’s been made since version 2. They’ve integrated a lot more tightly into the PLAY software, and include some very impressive dynamics control licensed by SSL.

I felt that StormDrum3 was a lot more refined than the previous versions – it could still blast the crap out of my speakers with its massive drum sounds, but there was a lot more subtlety with the world percussion, the sound was just richer and the sample layers a lot deeper.
Hence, the sound is just incredible. The instruments that are sampled are also taken from private collections and offer much more unusual timbres than your regular Taiko and massive Frame drum sounds.

Here’s a walkthrough of sounds:

East West have also recently updated 30 instruments of their legacy catalogue and have refreshed and remastered some fantastic loop libraries, including works by BT and Public enemy.

They cover a wide range of electronic genres, from techno and hip hop, to mainstream house and drum and bass. Some other older instruments, such as StormDrum1 and Strat guitar are also included.

They’re all reworked to fit neatly into the PLAY universe, where there’s new life brought to these loops – for example, a lot of the loops and construction kits are now on multi-channel, so you can adjust levels of different elements to suit taste. And obviously they follow host tempo, using the algorithms within PLAY.

I downloaded ProDrummer series 1 with Mark ‘Spike’ Stent, who’s been a long time favourite producer of mine.
This library is very similar to the BFD series of drum libraries – where you can set up your own drum kit, playing style, and midi within the library to create a fully-fledged drum track for a plethora of styles.

There’s a massive library of patterns that you can assign in any order, tweak at will, and add to any of the massive 60GB-worth of 7 drum kits, from Slingerland, Gretsch Yamaha and Ludwig, with Zildjian cymbals recorded.

There’s a mixer page, which enables you to tweak each kit and room mic, and add from the excellent built in FX that adds to the SSL plugins already developed for PLAY.

One caveat is to download the library overnight (or 2 nights, depending on your connection!), as it’s a massive library. And it shows in your RAM and CPU usage also.

I found ProDrummer to be absolutely fantastic sounding. You can get some really lively sounding drums in a variety of styles – I’d say leaning heavier, rock, power pop kind of vibe. But of course you’re only really limited by your creativity, and could fit these sounds into a lot of music. 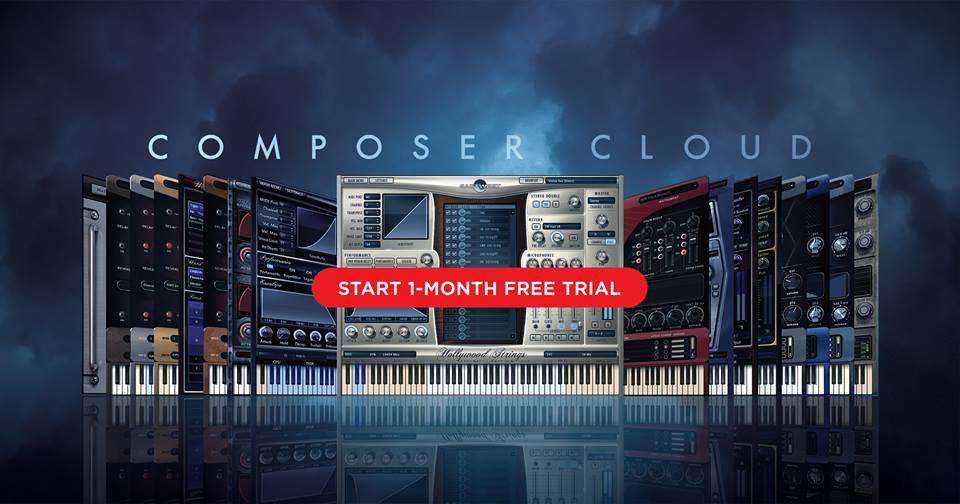 New meaning to the library
Enough talk about the libraries. There are so many of them it would take me months to do them proper justice in review form.
Just trust me, they’re world class, and their website does a great job of displaying that.

Composer Cloud is a brilliant step forward. It seems like a win for both EastWest and their customer base to me, on many levels:

For EastWest, I imagine that the prospective market of people willing to pay $30 a month is many times larger than those willing to drop $1k a time for each top notch library. The subscription model is also self-marketing here. There are going to be a lot of people that try out the service who have been curious but can’t afford the product. Once experienced, the products speak for themselves as a convincing reason not to go elsewhere for that kind of instrument.

For the customer, there are also many reasons this is fantastic. Firstly, the cost. Sure, if you’re a pro composer, you’ve probably got a budget that stretches to buy these libraries outright. But for the hobbyist or project composer, for the producer who’s growing in his/her skills and gaining a customer base, this is access to the best samples without the $11k upfront. There is no downside. You can now dip in and out of libraries as and when you need them.

If you’re not sure about whether you need ProDrummer1, or maybe version 2, or maybe something completely different, you don’t have to spend upwards of several hundred dollars to find out. Brilliant. Even if you stop the subscription for a while – you can come right back, with your sample libraries saved where they were, ready to use.

One thing to wonder is whether the subscription will remain at the price it is. It’s an incredibly good deal at the moment. There is nothing stopping EastWest from raising the price as time goes by.
However, EastWest are nothing if not generous, often throwing sales on for their customer base.

I would say, if you’re writing music for any reason, especially for media, this is an absolute essential to check out.

It could save you a lot of money, while providing access to absolute top notch sound libraries for the work you do. I was already a heavy user of EastWest products, but this has me more committed to their sounds, for ease of use and access to a larger pool of sounds.

You can find more information on the Composer Cloud website (make sure you scroll down to the FAQ).