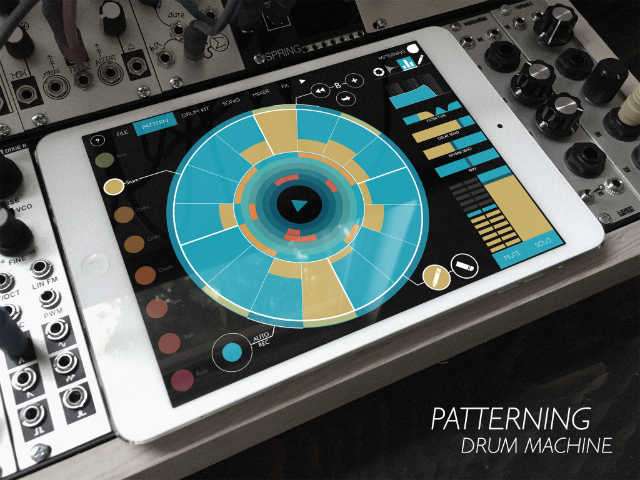 There is a new sample-based drum machine on the market, but it is unlike any others. Visually, it is almost like Kymatica’s Sector app adopted a baby drum machine. Instead of linear steps, the steps go around in a circle creating patterns, hence the name Patterning.

It offers a unique and intuitive way of programming drum beats and other rhythmic sounds. The interface is brilliantly arranged and vibrant with colors making it a pleasure to use.
Let’s find out more about the new Olympia Noise Co.’s creation…

Technical stuff
Let’s get the technical stuff out of the way. Patterning does require iOS 8.1+ and iPad 3 or higher. I could not find information on their website, but I was able to import wav, m4a, AIFF, and mp3 files at 16-bit and 24-bit.

I am not sure if there is a file length limit, but I was able to import a several minute recording. This opens up a lot of possibilities since you can select the same sample for multiple tracks and adjust the start and end points.
It can send and receive midi clock. It can also send out midi notes on a per track basis.

Creating a pattern
Creating a beat is as simple as swiping your finger around the circle. You can control the velocity depending on how far away from the center you swipe your finger. The further away you are from the center, the more velocity. This is done on a per step basis. It is also not limited to just the velocity. You can also adjust the settings, essentially automating the tuning, pan, attack, filter, sends, etc.

The default steps are set to 16 but each track can be set independently from 1 to 64. The step duration can also be set from 32nd notes up to whole notes with triplets and dotted notes in between. 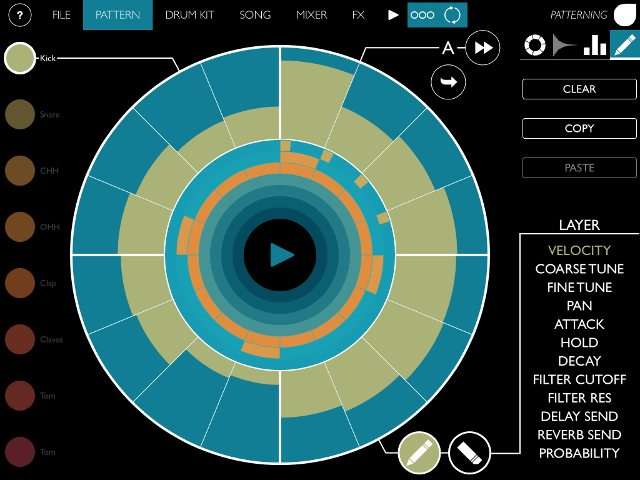 The loop and playing modes plus the auto-rotate feature are what really makes Patterning stand out. Creating complex and dynamic rhythms is a breeze (euclidean rhythms, anyone?).
Try different settings combinations and enjoy the results!

Tracks
Within each pattern, you have 8 tracks for your samples. For each of the samples you can adjust the attack, hold, decay, and tuning. You can also adjust the start and end points of the sample. There are 2 assignable choke groups as well. Each track has sends to the FX section and each track has independent filter section.

Kits
Quality is the keyword here. You’ll find a huge variety of styles, from minimal techno to IDM to more creative kits featuring some pretty cool samples (check out the artists behind them!).

I like the option to load the samples with or without the kits’ FX settings.
Their website says it includes 63 kits and counting. Not sure if they will be IAP but since its release they have added 4 more optional kits to download.

Song Mode
The song mode is really thought out and organized. You have seemingly unlimited patterns which will switch between them with a touch on the song section. The patterns are named using the letters A-Z then the naming starts over with AA and continues on. 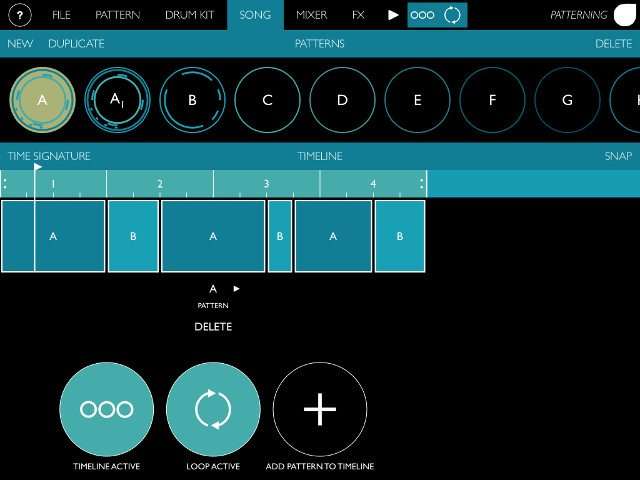 Selecting a pattern in the song section and tapping the big plus sign will add it to the timeline. Something I have not seen before is that you can adjust the length of each pattern inside the timeline. So if you only wanted the first half of a pattern to play, it is as easy as dragging it smaller to the beginning of a beat.

Mixer and FX
The last 2 sections are pretty basic in the since it’s the standard mixer for each pattern and the FX section. The mixer has the basic sends, pan, levels, solo, and mute for each track. The FX section has a standard type delay and reverb. There is also a master EQ with low mid and high settings along with a distortion section. 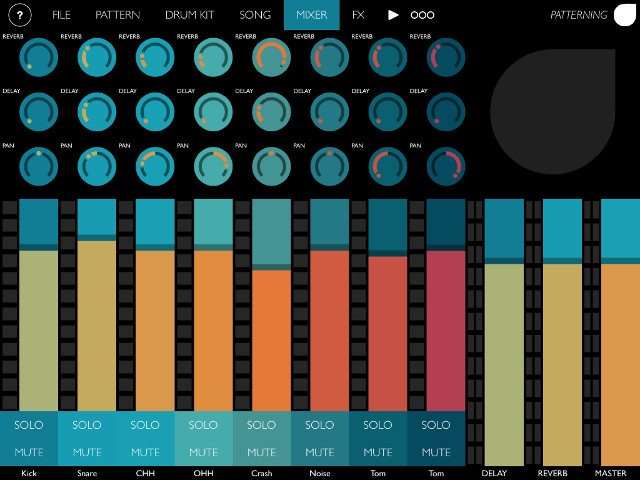 Connectivity
Currently, the export option creates a song file, .onps. This file contains all song information to include the samples used. I tested this by exporting a song with user-imported samples. I then deleted the app and reinstalled it to start with a clean slate. I used Dropbox to open the file in Patterning. It worked. Everything was there to include the imported sample. So that would be a great way to backup songs or share songs with others.

Also according to the developer, exporting as a .wav file is in the works, but they want to get it right. So instead of delaying the release of the app they choose to release it with limited export options.
I think that is a very smart move on their part since so many apps get released with tons of features that barely work.

You can, however, record your performance into Audioshare or your favorite DAW using Audiobus or IAA. I tested this inside Audioshare as an IAA and tested it running through Audiobus. Both worked great for me. I also tested it inside Cubasis and it worked, although it seemed to want the app opened up before adding it as an IAA track

Conclusion
There is so much going on in this app that you could almost write a book about it. Thankfully, the guys at Olympia Noise Co. provided a well-designed help section in the top left corner (available in several languages).
At $9.99 US, Patterning app gets a high recommendation. Amazing (user interaction) design work, inspiring and fun to use.

It’s a great time for drum machine apps on iOS. The good news is that Patterning doesn’t try to clone or replace other more traditional tools. It’s simply something else, and it may lead your beat-making process to unexpected and more creative results.
Even though I own many other drum machine apps, I feel Patterning may become the one I’ll use the most.