Well, here we are in 2015 and we’re still liberally sprinkling compression through our mixes.
As it’s 2015 I thought I’d look at two completely different approaches to software compression, exemplified by: Klevgrand produktion’s ‘Korvpressor’ – ‘smart dynamic hotdog device’ – a thoroughly modern take on both compression and GUI design – clean, crisp and snappy.

On the other hand, Klanghelm’s ‘MJUC’ – an emulation of… well not exactly an emulation of anything, but certainly containing within its code emulations of various flavours of optical sensor circuits spiced up with lots of colourful non-linearity. What fun!! 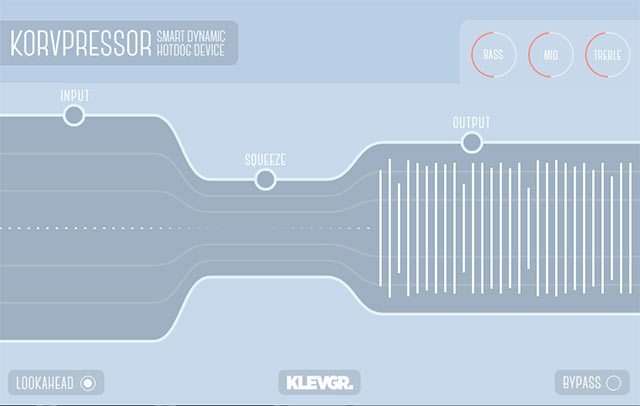 Open it up and you see a pale blue interface (maybe too pale) with a darker central band – the hotdog – with three click and drag circular handles, labelled: INPUT, SQUEEZE and OUTPUT.

The idea being you pull up or down on the handle to set the device. In addition, there is a lookahead button, a bypass button and, at top right, bass, mid and treble controls. And that’s it, folks. Put sound through it and SQUEEZE.

So how does it sound? Well, it compresses properly without messing up your sound. It’ll tighten drums, add sustain to bass and melodies and really squash a sound without destroying its musicality.

On the master track, it can bring out low-level detail: reverb tails and any dirty, gritty bits nicely as well as performing a ‘glueing’ function.

It will also go quite loud and appears to have a built-in brickwall limiter, as it never goes over 0db. The EQ section is not extreme but does enough to be useful. Maybe this is a multiband comp?

There’s obviously quite a lot going on under the hood of Korvpressor. That it always remains musical under extreme pressure is a sure sign the developers know what they are doing.

So to MJUC:
(intro price 24 euro, available as VST/AU/AAX/RTAS plugin)

Open it up and a nicely presented, old school, hardware GUI presents itself. Blue background with large ‘COMPRESS’ and ‘MAKE-UP’ dials flank an impressive VU meter. Below the meter two switches: ‘TIMING’ and ‘MODE’ (Limit and compress) complete the front panel. Oh, there’s a power light, which is a bypass button.

And still more: a drop down panel with ‘Timbre’, ‘Drive’, a side chain filter cutoff and a mix control. Plus resizeable GUI, HQ mode, switchable auto gain compensation and a calibration mode to set to your preferred input sensitivity. Got it? Three different Opto style compressors in one.

Each of the three models has its own distinct tone and compression behaviour. Mk 1 is darker and fatter, Mk 2 makes leads and vocals just sit in the mix, with cream on and Mk 3 is lean (in a musical way), clean and powerful.

The VU meter is a revelation because it’s accurate. The Drive is subtle and wonderful and HQ mode, although it uses more CPU, turns it into an even better machine and I absolutely love it.

MJUC just makes sense when you use it, as an 1176 or an LA2A does, both musically and ergonomically: you turn a dial and the result is just as it should be…

Conclusion
To sum up, these compressors are both very reasonably priced, and downright cheap compared to many, and they are as good as any. They both excel at their job.

Korvpressor just works and will perform very well indeed when a clean compression/limiting is required. MJUC is not clean, it is coloured, a ‘character’ compressor, but one that can be placed on every track in a mix (if your CPU can do it) and the colour doesn’t become overpowering.

Both compressors prove that small developers are getting it right at a good price and are recommended.