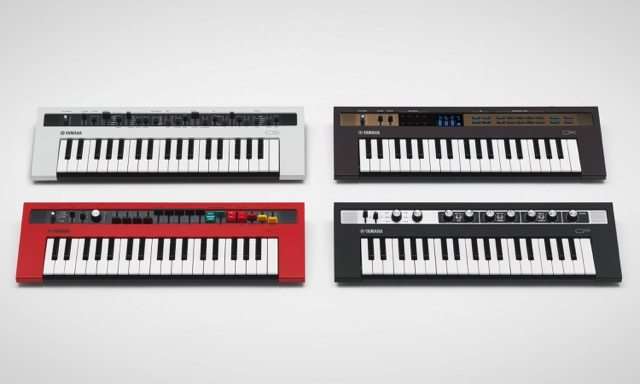 So, after the rumors, the teasers and yesterday’s leak, Yamaha today introduced the new reface Mobile Mini Keyboards.
I grew up in the Eighties with a Yamaha portable keyboard, so for me, looking at these four new products it’s like going back in time.
Ok, enough with nostalgia. Let’s have a quick look at the most relevant facts.

Common features
– 37 key with HQ-Mini action (derived from the Motif XF)
– battery-powered
– built-in speakers
– “one to one” control scheme, meaning the panel controls perfectly match the tone generator
– MIDI out, USB connection for computer and mobile devices
– minijack (3.5 mm) input, a line in basically – plug your mobile device and start jamming!
– compatible with an iOS app, Capture – this allows you to plug your phone into the keyboard and switch presets

Yamaha reface DX
Inspired by the DX family, it features Multi-Touch Control interface that makes it easy to customize your sound with the FM synthesis engine. The instrument includes 8-note polyphony, 32 Voice Memories and a backlit display.

Yamaha reface YC
Inspired by the Yamaha Combo organs introduced in the late Sixties. It includes five retro organ sounds—ranging from tonewheel to transistor to the original Yamaha Combo organ and 128-note polyphony.

Thoughts
I have to say that, after watching the first teasers I wasn’t expecting something like this. But that doesn’t mean this is bad news (even though analog-hardcore fans will be disappointed, I hear you). It looks like these keyboards are going to be fun to play with, and they can be refreshing tools for the younger generations of keyboard players.
I’m looking forward to trying out the reface DX and CS (even though this one is ‘just’ a virtual analog synth). With a slightly lower price (I guess the street price will be around $650/650 EUR) these keyboards would be more appealing With a $499/399 EUR street price, if they feel and sound good I’m definitely interested – their polyphony and hands-on approach could make them a sweet partner for an analog mono synth & drum-machine rig, or for a no-frills live band. Plus they’re couch-friendly. After all, that’s how it all started for me…