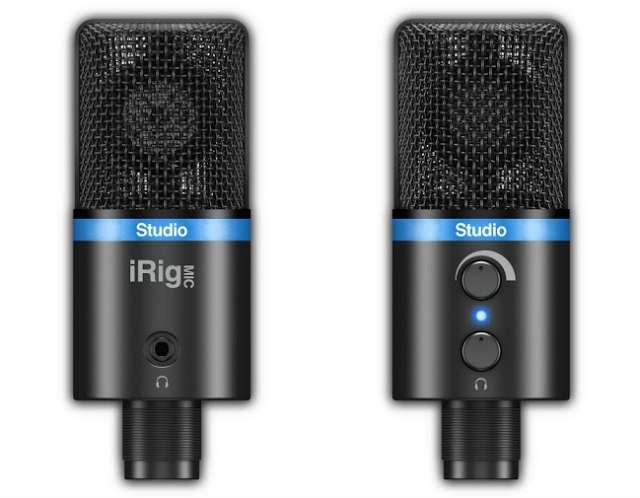 Are you a singer/songwriter, a podcaster, a project studio owner? Read on, this one is for you.
Over the last couple of weeks I’ve been able to test one of the first units of the new IK Multimedia iRig Mic Studio ($179

Main features
iRig Mic Studio features a 1” electret condenser capsule and a 24-bit converter with 44.1/48Khz sampling rate.
Unlike some of its main competitors, iRig Mic Studio integrates a headphone output (so you can monitor your recordings through the mic’s headphone jack) and has a handy multicolor LED status & level indicator.
When I say this is a USB microphone for all, well, I really mean it – iRig Mic Studio comes with Lightning, Micro-USB OTG and USB cables. This means that you’ll be able to use it not only with your iPad/iPhone and Mac (or Windows), but also on any Android device with USB (OTG) connector (like Samsung Galaxy S6, Galaxy S6 Edge, Galaxy Note 4 and Galaxy Note Edge)
Last but not least, in the box you’ll also find a portable tripod tabletop stand and a simple pouch.
Here’s a promotional video that will give you a more complete picture of its features.

In use
iRig Mic Studio may be very compact (it’s actually smaller than I expected!), but it feels quite sturdy thanks to its metal enclosure. The basic tripod stand makes it a perfect desktop microphone (podcasters, I’m talking to you!), but you can also use iRig Mic Studio with regular mic stands (as long as you have the right adapter).
I’ve tested the microphone with my iPad, using a few recording apps like Garageband, IK Multimedia iRig Recorder, Apogee MetaRecorder, etc. The unit has always been automatically recognized by iOS and performed flawlessly. I’ve also used it with my Mac and my main DAW, Logic Pro. No driver necessary, so it’s just a matter of selecting iRig Mic Studio as sound input and you’re good to go.

Given its 1″ cardioid capsule, I find that iRig Mic Studio is perfect for applications like solo singer/songwriter or voiceover talent. Using it with my voice and acoustic instruments like bells and small-sized guitars, iRig Mic Studio showed a nicely warm balanced tone. It has a natural (but not exaggerated proximity) effect, low noise floor, good off-axis rejection. Finding a sweet spot for the recording level is pretty easy, and thanks to the 24-bit converter you can leave yourself some headroom when adjusting the gain. The only ‘problem’ I had with the mic was the design of its input/headphone gain knobs, unnecessarily tiny and recessed (especially if you have big hands). Not a big deal though, considering that it’s pretty easy to find a ‘set-and-forget’ setting.

Conclusion
iRig Mic Studio is an attractive new entry in the ‘quality-yet-affordable’ (< $200) digital USB microphones field. It’s feature-rich, compact, well-built (except for those two knobs) and most importantly, it sounds great.
If you’re recording some demos for your next record, a podcast, sound samples for your music projects, etc., iRig Mic Studio is a reliable quality option (and believe me, often a demo performance can be more creative than the one later in the studio, you’ll be thankful if it’s been recorded with some quality gear instead of the cheapest possible s**t). Thumbs up!