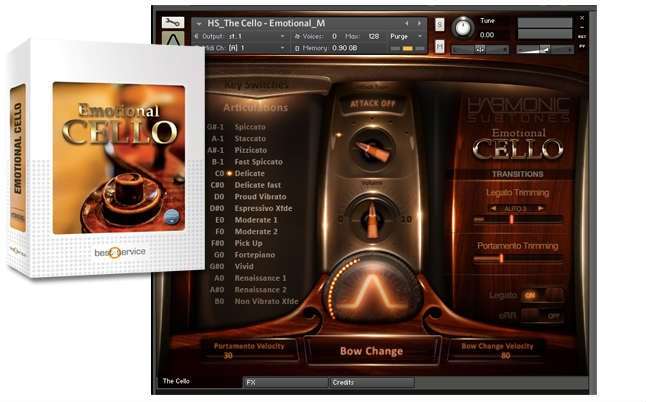 It can be challenging to make a multidimensional sampled orchestral string instrument. There are a number of titles that can do bombastic or single-dimension strings reasonably well, but there are far fewer players when it comes to expressive, nuanced strings that can be played easily.

They’ve produced an impressive entry in this domain that’s the most inspiring I’ve ever played. It passed (with flying colors) one of my fundamental tests: how quickly can I get started, and how long before I have to crack open the manual. In this case: nearly immediate gratification, and I stayed up way too late on a work night.

One of the main tenets of this instrument is that they elected to use no artificial modulation to emulate vibrato or other time-varying parameters. As such, all the vibratos are actually played. This produces some limitations (more on that below), but the result is impressive realism.

Structure
They’ve separated the patches into 4 main categories. Through pre-selecting the general patch type, you can be assured that most of the sounds in that patch will be in the ballpark of your needs, then you can narrow it down through keyswitches or CCs. I’ll present a basic explanation of each type, followed by some general tips for use.

Master Patches: These are monster true legato (i.e. accurately represent the different types of slides and transitions between notes) patches that contain many keyswitched articulations and variations that cover most common uses of the instrument. They are the crown jewels of Emotional Cello. The most impressive feature is how the detailed scripting chooses between 3 types of legato (Bowchange, Finger, and Portamento) based on your playing style and velocity, and effortlessly crossfades between them for uncanny accuracy. By turning on Round Robin, you can access an even more extensive level of round robin samples to avoid repetition, but this does come at a significant CPU cost. My 2010 Mac Pro didn’t complain with several instances, but if you were doing a whole orchestra it could be an issue. All patches include a useful Help pane that outlines most keyswitch or CC information, but there are a few hidden features of the Master Patches that bear mentioning. Dedicated keys for Re-bow, Repeat, and Add Vibrato allow your right hand to play fluid lines while the left adds these articulations for an even deeper level of realism.

2 Dimensional sustain patches: These infinite sustain patches offer continuous variation across not only dynamic layers (soft to loud), but also another dimension such as non-vibrato to vibrato, or normal to Sulponticello (playing near the bridge.) These are lovely for pads, textures, and builds. By default, mod wheel (CC1) is assigned to the dynamic layers, and you can freely assign a CC to the 2nd layer via drop down menu. I suggest assigning an expression pedal or aftertouch so you can play and vary both parameters at the same time. Very expressive and inspirational.

Singles: If you only need a single articulation, or prefer to separate your scores on different tracks of each articulation (rather than using keyswitches and continuous controllers), then you can use the single patches. These are organized by category in easily navigable folders. Note that these are non-legato patches, so they don’t include the scripting logic that allows the master patches to logically slide between notes naturally.

Keyswitch patches: These consists of a single type of articulation with key switchable variations. These are simpler patches but can be helpful for quickly auditioning different types of Sustains, Accents, Shorts, etc. Start here and go deeper with the master patches if necessary.

Bonus round: For the rhythmically inclined there are separate Pizzicato and Cello Percussion patches that encourage dynamic playing, especially when triggered with MPC/Maschine style pads.

Pro Tips
In the Master Patches, CC1 (Mod Wheel) is assigned to a lowpass filter which is pretty low when the wheel is at 0. While this can be useful for fading in the brightness of each note, I found it to be a bit dark as a starting point. I prefer to start in the middle to hear more details of each sound, then raise or lower as needed.

There are both a room reverb and main reverb on every patch. They sound nice and are good for auditioning sounds, but you may want to dial them back, or disable them and use your own reverbs that are more appropriate for your composition. Some of my favorites are 2C Audio’s Aether, Universal Audio’s EMT-140 for rich vintage lushness, or their Ocean Way for realistic spaces. Using the latter via Apollo Console in real time can send shivers up your spine for realism.

Complaints
It’s frustrating that there was no way to adjust the speed of any of the tempo based articulations such as tremolo, vibrato, and Jeté. However, since there are multiple patches in different tempo ranges, you can get close enough most of the time.

The saturation adds nice richness to most patches, but by default it adds gain, so it’s impossible to separate the timbre change from the volume change. This is a bummer in theory, but in practice I usually just leave it on since I like the sound. If it sounds good it is good, right?

Conclusion
Overall, Emotional Cello has some seriously expressive mojo. The secret sauce is in the brilliant scripting that they use to command the thousands of meticulously recorded samples in a way that allows a keyboard to intuitively control a solo cello expressively. Before I even read the manual I was able to play satisfying lines through natural variations in dynamics, playing style (legato vs. non-legato) and mod wheel. Once I learned about the keyswitches and hidden features, I just took it to the next level.

Take time to experiment and learn the different styles. I learned about a number that I hadn’t ever heard before. I’m inspired to use this for scoring work, and I have the confidence that I could write a totally passably realistic cello part if I needed to.

I recommend perusing the relatively concise manual for some deeper explanations of the functionality.

Harmonic Subtones provides a helpful walkthrough in this video: