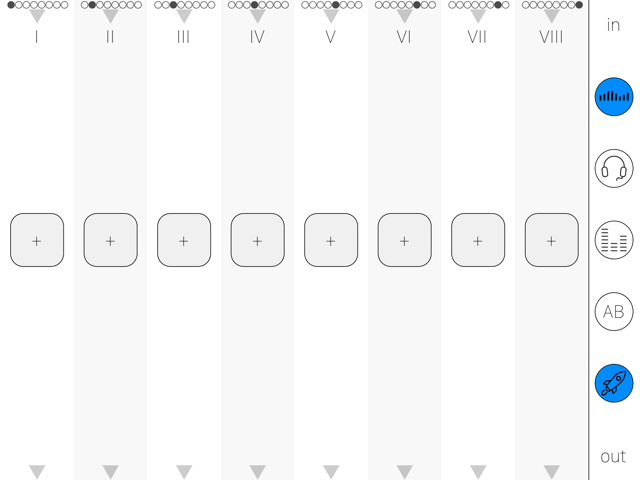 Audiomux v2 was released on Jun 27th. With it came some really nice new features and upgrades. They integrated IAA, they added support for Windows platforms. Most importantly they added VST and AU for easy integration into your favorite DAW. Another cool new feature is the addition of a per channel mixer with volume, mute and monitor controls. You can also send audio between each of the channels as well.

We have already covered the basic functions of Audiomux in a previous article so I will just be going over the new features.
Firstly, the interface has changed. It has 8 channels of audio that can house either an effect, an instrument or both. You can also route between each of the channels by clicking the top of each channel. This is helpful if you want to route more than one instrument to a single effect.

It now sports a new mixer window as well. Each of the channels has an in and out volume level as well as the ability to turn monitoring on and off and mute. Although Audiomux still fully supports Audiobus, they have also fully integrated IAA support. They do however recommend if you plan on using Audiobus along side Audiomux you will need to open Audiobus first to avoid any complications.

Let’s move to the computer side of things. Audiomux server supports MAC OS X 10.7+ as well as both 32 and 64 bit versions of Windows 7+. They have also made it easy to install the server and plugins on your computer. So far I have tested it in Logic Pro X and Ableton Live 9 Lite on my MacBook Pro. What I think is great about the implementation of AU and VST is it brings the iPad into the studio as an external instrument, an effects processor, guitar amp, or whatever you want it to be.

I will say that as of right now the Instrument plug-in side cannot send midi to the iPad. I emailed the developers and they are working on it. In both Ableton and Logic it is easy to send midi to an external instrument on the iPad using their other app Midimux. It makes sending and receiving midi data super easy between devices.

I would highly recommend Audiomux and their other app MidiMux. It makes integrating your iOS synths and effects seamless. The developers are working hard to continue to improve the app and add features (a new beta was just released this afternoon). Even though Apple announced the basic integration of audio sending via USB in the upcoming software updates, it is only a single stereo channel. So I do not think this app will become obsolete since it offers way more functionality.
Here’s a quick video walkthrough of Audiomux 2 with Apple Logic Pro and Ableton Live. Questions? Issues? Please leave your  comment here below.