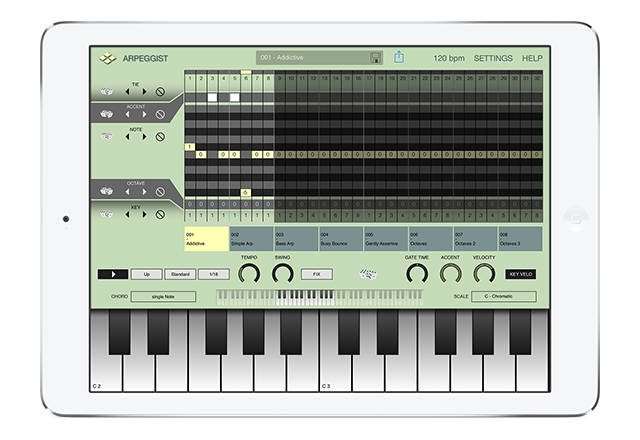 The Arpeggist sounds like a movie, but it’s a new iPad app by VirSyn. Well, I say new but if you have used any of their other synth apps you are already familiar with the app. It seems to be a direct port of the arpeggiator section from their other synths.

But, if you happen to own some of them, here is my question. If it’s the same as what is included in their other synths then why would you want to buy it?
I feel it gives the user a great stand-alone arpeggiator that can be used without tying up one of their other awesome synths. I think it could also open up possibilities for VirSyn to develop the app independently from their synths to add enhancements and extra features.

The Basics
It features up to 32 steps to program in notes with the ability to accent different notes and also tie notes together. Almost everything can be randomized by clicking on the appropriate dice. The app has an amazing chord generator that can trigger complex chords with a single finger using the on-screen keyboard. You can also adjust the keyboard scale and key to optimize playability. It comes preloaded with 40 arpeggios but you can save an unlimited amount. It seems there is no preset organization except by name so I think I will save all my custom presets beginning with “000-“ then a name. That way the ones I create will always be on the top.

Testing it out
Arpeggist supports Audiobus and Inter-App-Audio. I have tested it out on a few apps so far, all with good results. I kept Arpeggist running and I would just close out one synth and open another, go through a few presets to see how it sounds and make sure everything was working. Here is a list if apps I randomly tested this morning.

I also tested it out using Midimux to control some instruments in Logic Pro X. It worked like a charm. I recorded the midi notes into Logic to see exactly what was being sent. It seems the standard velocity that is being sent is 100 and if you accent a note it goes up to 127. I had a few notes that had ties on them and it appears to extend the previous note and over lap notes. Also, I got it to tempo-sync with Logic using Midimux. I set the tempo in Logic to 101 and Arpeggist seemed to bounce between 100 and 102, which was close enough for me. I pulled in a simple apple drum loop and played around with a few synths being controlled by Arpeggist. I did not notice any temp difference so it was definitely playable.

Improvements
If VirSyn is going to pursue developing this app further I feel a few minor things need to be address. Firstly, there need to be folders to organize presets with. Another big thing for me is when you have the ARP trigger mode in hold keys it does not show which keys are being held. This can be annoying when you get lost in a 5-minute jam session only to realize you can not remember what keys you had played.
Also, it seems that it sticks notes sometimes, but it is not noticeable unless the patch has a lot of sustain.

Conclusion
At $4.99 I think the price is reasonable. If you are looking for some inspiration or for an easy way to check out different presets within other apps, Arpeggist is an amazing little app for that. I had a lot of fun with it just going through different patches in Thor. It never missed a beat while quickly switching presets to find the exact bass I was looking for. If you find that perfect preset you can use the random buttons as an awesome way to explore different possibilities and find inspiration.