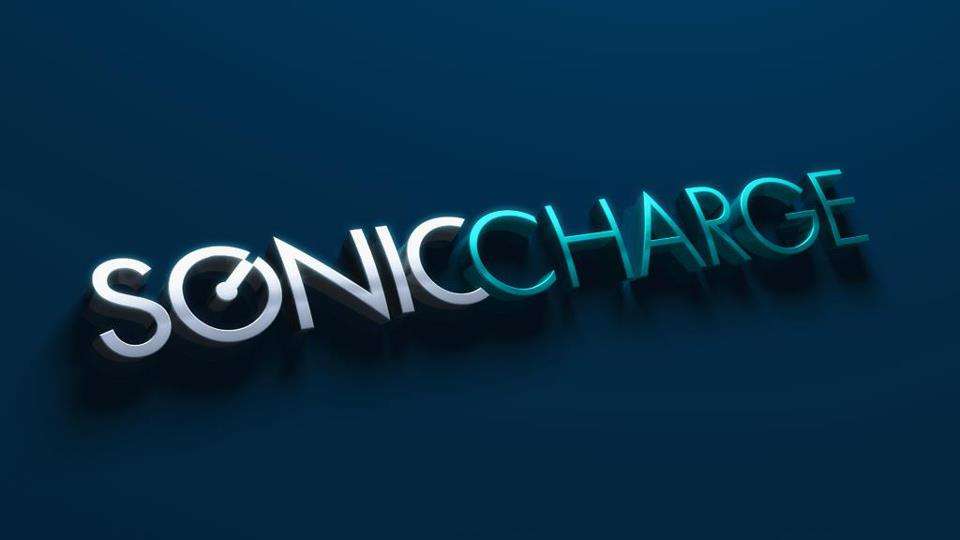 Echobode is the latest plugin from the esoteric yet excellent Sonic Charge, creators of the fantastic Microtonic, Synplant, Bitspeek and Permut8 plugins.

Echobode has been around as a Reason rack extension from 2012. It is a linear frequency shifter (the algorithm for which is named after inventor Harald Bode). Quite typically for Sonic Charge, it doesn’t stop there, with the addition of a delay feedback loop.

The look
The simple one-window GUI that wouldn’t look out of place in a 50’s American diner has a huge frequency dial taking up the majority of the plugin. The top left quarter of the plugin is the delay element – a delay time, with a host sync switch below it, a feedback knob with a crossover switch beneath it. There are sound shaping elements to the delay line, with both high and lowpass filters, a lovely sounding smear amount, which essentially take all the snap of attack off the delay, and spectrally stretches the input audio. This is all then mixed with a mix amount. 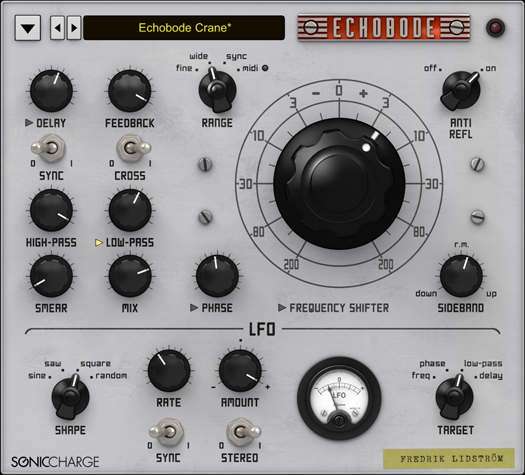 The top right quarter is the frequency shifter, dominated by the frequency dial. A smaller knob to the top left of that determines the range of the frequency shift – whether it’s fine adjustment, or a larger range, and if it syncs to host, or to midi notes. I love the midi implementation here – you can get the frequencies to shift according to notes that you play on the keyboard. Brilliant. They layout the setup for midi in the manual. There’s another anti-reflection knob which cuts out the harmonics that shift below 0hz or over half the sample rate. The excellent manual explains the physics behind it, but suffice to say, twiddling it gets some really excellent results every now and again.

There’s an LFO in the bottom of the GUI window. The LFO can modulate several elements of the plugin – the delay time, phase shift, the distortion amount, and the Low pass filter. There’s a little arrow next to each of these elements. To set them as the destination it’s a simple click on the arrow. It turns yellow to indicate what the LFO is affecting. The LFO has several waves – sine, saw, triangle and random, and the amount and rate can be adjusted that can be free running or synced to host tempo. There’s also a stereo button, that changes the LFO to a wide stereo spread – great for rhythmic panning of sounds.

The sound
It’s possible to be very subtle with this plugin, and create some very nice reverbs, phasing, delays etc. But it’s also easy to tweak it a little and create some wild effects that completely move the sound into new arenas, as you feedback the delay with a rising frequency shift, combine it with mad LFO movements and so on. If you’re not sure where to get started, there’s a bunch of presets sectioned into delays, reverbs etc. But the beauty of this plugin requires spending some time with it. As it’s a frequency shifter it’s very easy to get into the digital inharmonic overtone area, creating metallic and bell-like delays. However, with the smearing option and filters, you can get some nice lush evolving rich sounds off any source.

Sonic Charge have put together a great little video demonstrating the really wide variety of effects you can garner from Echobode:

Conclusion
As with all Sonic Charge plugins, Echobode is a lot of fun. It demands spending time with it to start reaching some fresh inspiration, but fairly soon you can start getting some really nice unusual sounds and textures out of the plugin. At the price, it’s a good fun plugin to add to the arsenal to keep the inspiration coming.