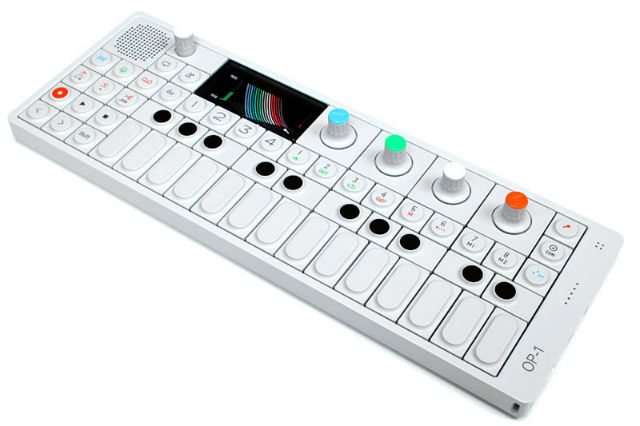 How many times have you heard things like ‘I feel stuck in a creative loop’ or ‘I was more creative when I only had a few tools’?
Speaking of the music-making process, the last 15 years have seen a dramatic shift from everything we were used to. Computers have taken center stage (metaphorically and literally), processors kept getting faster allowing developers to create increasingly more impressive (and less expensive) musical tools.
Many of us ended up having “powerhouse” DAWs and an endless list of plugins (‘weird, I didn’t even remember having that one…’).
But how did all this affect our creative approach? Did we really benefit from this technological spread? Sure, many did, but I have reasons to believe that many others didn’t.

Workflow, limitations and the OP-1
When making music, finding the right workflow can be challenging and frustrating at times.
While watching YouTube videos and reading interviews of your favorite artists, you may have noticed that most of them have a very streamlined and efficient setup. They are not afraid of its limitations, actually quite the opposite – they play with (and against) these limitations, making the most out of their tools.
Yes, instruments’ limitations and setting limits in the studio can certainly lead to creative success. Many others have written about the concept of ‘limitations’ better than I ever could, but this word (alongside ‘workflow’) kept running through my head, while checking out the Teenage Engineering OP-1 over the past few weeks.

The OP-1 has been one of the most hyped, discussed, loved and hated musical devices of the last few years. I came across it multiple times, but for one reason or another I’ve never been able to spend some quality time with it. That finally changed when I received a test unit from Teenage Engineering.
Doing a feature-by-feature review is not the purpose here. I’m sure you have read/watched plenty of them by now. I would rather highlight why a device like the OP-1 is still relevant today and will likely be in the future.

Fun By Design
A device inspired in its form factor by the Casio VL-1 had to be playful. And the OP-1 is as playful and fun as it gets. Considering this was Teenage Engineering’s first product, the result of their industrial & software design work is even more impressive. 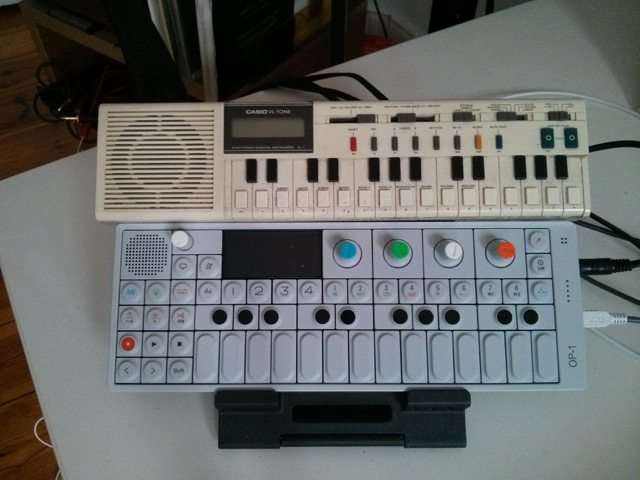 Using the color-coded interface is a usability dream come true. I kept the pdf manual as a reference (not so detailed, to be honest), but that’s more because I’m one of those rare RTFM kinds of guy.
You can approach the OP-1 as if you were a child with a new toy, and that’s probably one of the best things that can ever be said of a musical device. Its workflow is smooth and ‘transparent’. You keep doing things and discovering new tricks and possibilities as you proceed. This sounds like a video game, right? Well, yes, that’s part of the OP-1 inspiration too. But don’t be fooled by all this playfulness. The OP-1 doesn’t have to be a chiptune-machine. Why not create a modern electronic Requiem on it?

Retro Meets Future
One day in the year 2699, if the aliens that visit Earth discover a rare, ancient relic called OP-1, they will have some trouble figuring it out. ‘WTF? A compact digital device that features multiple synth types, samplers, an FM Radio and a tape machine emulation? We’re talking of technologies spanning over 60 years of the 20th century. Whoever made this, must have been some crazy son of a b**ch! Even for our 27th century standards, this is pretty cool…’. 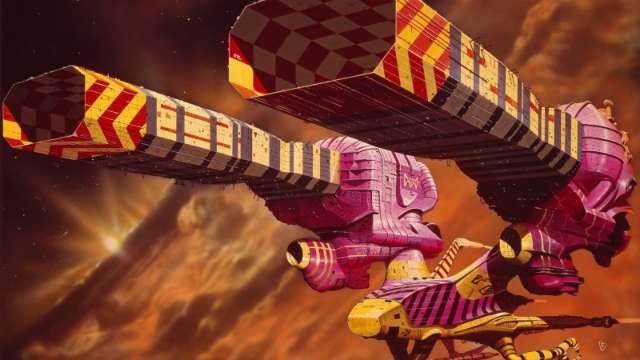 While this mix of features may look quirky on paper, the Teenage Engineering guys did an excellent job at integrating them in an effective workflow that looks at the past as well as at the future.
I started my musical adventures with a four track tape recorder, so in a way this felt like going back in time. But even if you are quite young and you’ve only heard about tape machines, it shouldn’t take you long to realize how the whole thing works.
It’s probably better to forget what you know about DAWs and computer-based workflow – just use your instinct. You won’t have unlimited tracks or fancy features to play with. That’s ok. It’s time to put to good use the part of your brain that hasn’t seen much activity in the past few years. Again, limitations are your friends.

Creative Block
Making music (even the most serious music) has to be fun, otherwise what’s the point? If you feel like you’ve lost that loving feeling, the OP-1 can be a powerful healing drug. Sampling all kinds of sources (through the radio, mic, line in) and using them to create a synth or drum patch; recording something on tape and then resampling it for some further crazy sound mangling; sequencing what you’ve just sampled, with multiple and compelling tools – all this makes for a hands-on, refreshing creative experience that will take you to sonic places you would never reach with your current setup.

When inspiration strikes
Thanks to its long battery life, I find that the OP-1 is quite a flexible tool. It’s amazingly couch-friendly, it can be a great companion during a long flight or train ride, or at the hotel you’re staying for the night. But even though the OP-1 is a cool standalone device, it can also become part of a more complex setup.
I’ve used it with some of my acoustic instruments (piano, kalimba, etc.), with iPad sequencers like the upcoming ModStep, with MIDI controllers like iRig Keys Pro and the QuNexus (thanks to the handy Midibridge app). Exporting tracks to your DAW (for some sound processing and mixing) is as easy as connecting the OP-1 to the computer with the USB cable.

Don’t believe the hype trolls
I’m not a marketing man, but if I was, I’d definitely study the OP-1 case. After the initial curiosity and hype, I don’t think I’ve ever found so much uninformed and unjustified ‘hatred’ towards a musical device. The OP-1’s price and size have become the scapegoats. ‘How can they sell such a tiny and limited device for all this money when you can buy an iPad and load it with lots of apps?’
Fact is… these people (or should I say trolls?) in most cases have never put their hands on an OP-1. They have never (and will never) taken music making seriously. They will never understand the difference between investing money in an actual musical instrument (unique and beautifully designed) rather than in a device that can ALSO be used to make music.
What I find frustrating is that these misleading comments can (and will) inform the decision-making process of many (not experienced) potential buyers. It may sound obvious, but do yourself a favour – next time you’re interested in a new musical instrument, just visit the nearest shop and spend some time with it (or buy from an online retailer, you can always send it back).

Resources On The Web
If you’re interested in the OP-1 or if you just got one, here’s a few tips…

Don’t forget to buy me a couple of beers, given I did all the googling for you!

Right here, right now
If you can afford the OP-1 (it’s current selling for $849 in the US

– maybe due to VAT issues?), I’d say go ahead and have fun with it. It’s not cheap, but neither are these trendy modern analog reissues or hw sequencers, to be honest. Considering its vast sonic possibilities and the impressive design, I think the price of the OP-1 is quite fair.
True, it’s not as ‘warm’ (ermmm) as your analog synth(s), not as ‘tight’ as your drum machine and not nearly as full-featured as your DAW.
And it’s not meant to be. It’s simply something else, something unique that can push your creative boundaries in surprising ways.
Who knows, one day there will probably be a new version with better specs, more storage, etc. But again, that’s not the point. We don’t live in the future. We want to make music right now and we want to enjoy making it, don’t we?
The OP-1 is an ingenious workstation (‘funstation’?). I regret not trying it earlier, but I’ll do my best to make up for all the fun times I’ve missed.
Now, if you’ll excuse me, I should go check my bank account. After all, there’s a chance that this review unit won’t go back to Sweden…