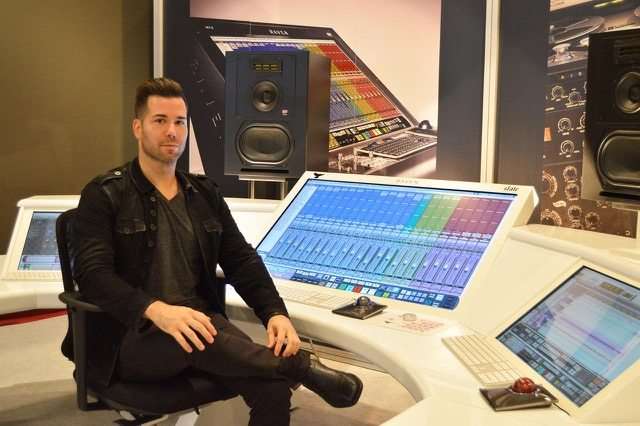 I enjoy trying the craziest and newest virtual synths or FX, but when it comes to mixing plugins I’m usually quite conservative. I have my ‘circle of trust’ and I tend to stick to that. Now that I think of it, it’s funny that most of these names start with an ‘S’, like Soundtoys, Softube and… Slate!

At ANR we’re great fans of Slate Digital’s plugins (since our good old Trigger review). Their Virtual Mix Rack and Virtual Console Collection are probably my favorite – top notch analog outboard emulations that can add depth, punch and ‘character’ (sorry for the lack of a better word!) to your in-the-box mixes. I also like the fact you don’t need some bulky hardware card to run them (like Universal Audio’s stuff, that I love and I’ve used a lot in the past but doesn’t really fit in my current ‘lighter’ setup).

Slate Digital is only a part of Steven Slate’s world though. He also runs a hardware Pro Audio company, featuring products like Dragon (a 1176-style compressor) and Fox (a funky dual channel mic preamp). Last but not the least, Steven Slate own also a Media Technology company, whose main product is the RAVEN, a state-of-the-art multi-touch DAW and software controller (available in two versions).

As you can guess, Steven is a busy guy, but we’ve been able to distract him for a few minutes and ask him some questions…

– Hi Steven, thanks for joining us. Diversifying seems to be a keyword in Slate’s world: Trigger, then the mix plugins, then the bold jump in the hardware arena with Dragon and Fox, then Raven. Do you ever sleep? Now seriously, is that because you’re that kind of guy that easily gets bored and constantly needs new challenges, or …? May I dare ask what’s your next idea?

New challenges definitely excite me. So does new territory. Not too long ago I was a musician and audio engineer and I had the challenge of making my first product, which was just some drum samples wav files burned on a CD-R.
But even that simple product was an exciting challenge, and that feeling of doing something new, unique, and creative is something that I strive for each day. We have lots of new projects in the works, but the one I’m most excited about is our upcoming Virtual Microphone line.

– VCC 2.0 and VMR are top notch software emulations of classic mixing tools (with obvious benefits). But besides being great mixing tools, in my opinion they can also be valuable educational resources for those users that have never had a chance to touch an actual SSL, API, Neve. What’s your thoughts on this?

I think that the modules in VMR have been classics in the audio industry and that it is certainly helpful in audio education for students to experience how they operate, and how they can help them make music. I look forward to the VMR platform’s future to not only introduce more classic units, but to also introduce new designs of our own.

– You often mentioned how important Fabrice Gabriel has been for Slate’s development. Would you like to tell us how this collaboration started and what’s the usual workflow between you two?

Fabrice is the foremost expert in audio DSP in the world, and I am fortunate to work with him. We met at a tradeshow and immediately bonded over our hatred for the loudness wars. At the time, music was being mastered so loud and by insufficient tools, so that the sound quality was smashed and abrasive. We both agreed to fix it and a year later the FG-X was released.
The collaboration between us consists of him making world class algorithms, and then I will tweak them by ear, and then he and the DSP team will modify according to my notes. This back and forth can happen many dozens of times throughout the development process, and in the case of the Virtual Tape Machine, it took an entire two years!

– While your plugins are quite affordable, your hardware products are in the hi-end segment of their market. Can we expect some mid-range item in the near future?

– Basically, all your products so far focus in a way or another on the mixing side of things. Do you think we’ll see Slate involved also in more creative, experimental tools sooner or later?

Yes! Our new flagship product that is near completion is the Virtual Microphone System, which will allow you to track with a virtual closet of the industry’s greatest mics!

– Let’s talk design and skeuomorphism. While I understand that (especially for audio tools) it makes things more familiar for people used to old school items with knobs, etc, skeuomorphism is not always ideal in terms of interaction. Some apps for iPad, for instance, have been able to offer new and more compelling interaction concepts. Can you envision a future for the digital audio industry, where the old-school sound quality and vibe finally meets 21st-century design and usability needs?

Having grown up in the industry around hardware but working and developing in it with software, there is something inspiring about making the software mimic the photographic realism of the real stuff. However, if I felt it made the product better or more functional, I’m not opposed to more 2D designs.

– Your most favorite Slate product and why?

Right now it’s the Virtual Mix Rack. I just love the versatility of making my dream channel strip for every track.

– An existing software or hardware product you would have loved to have your name on?

The iPhone. Why didn’t I think of that!!