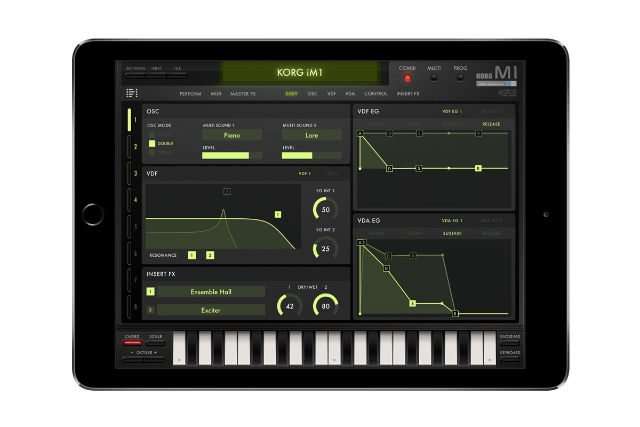 KORG iM1 for iPad offers the iconic sounds of the KORG M1 with the improvements you would expect from a touch screen interface and 21st-century must-have features.

Pros
– If you want the M1 sounds on iPad, this is the real thing
– Improved interface, extra features
– Bonus extra instrument for KORG Gadget owners

I am one of the many thousands of musicians that bought a KORG M1 in the late eighties (here the Wikipedia page, if you’re a millennial), and… oh boy, did I use it a lot. Actually I just sold it last year, and I’m glad to see it back on my iPad screen.
KORG iM1 (on sale for $19.99 until June 30th, then $29.99) is a faithful reproduction of this classic digital synth, and (a rare thing for an emulation) it succeeds in improving it.

Improvements
Let’s face it, the M1 wasn’t exactly easy or fun to program and manipulate (no knobs, lots of menus, etc.). The iM1 makes the most of the touchscreen interface offered by the iPad. Everything is one or two taps away, and clearly laid out (some buttons may be bigger or easier to tap though).
The instrument’s usability is not the only improvement. KORG added some new features that will make old M1 users quite happy.
Programs and combinations are now entirely independent. Also, you get filter resonance, VDA modulation and many new insert effects.
One of my favorite new additions is the “KAOSS Pad”. It’s a classic of KORG apps, but somehow I found it even more useful than usual. It can help spicing up even the most (ab)used M1 presets. Give it a try!

KORG Gadget users, meet Darwin
Remember our KORG Gadget and KORG Module reviews? Well, if you have Gadget and iM1 installed, you automatically get a new instrument (Darwin – yes, it’s the name of a city!).
This allows you to use your iM1 presets in Gadget, expanding the (already wide) sonic range of this app.
Speaking of connectivity, iM1 also supports Audiobus and Inter-App Audio, so it can also be used as a sound module for GarageBand.

ROM cards for all
The iM1 includes the original M1 and the M1EX presets, plus the content of 4 of the original ROM cards added through the years (Memory, Synth 1, Drums 1 and Orchestra 1). With the Store tab you can buy (as in-app purchase, $4.99/€4.99 each until June 30th) two Cards Packs, featuring ALL the expansion cards ever released for the M1 and the T1 (the so-called second generation of M1 workstation).
Considering the convenient browsing experience and the price of these cards on eBay, I’d say these IAP are a must! 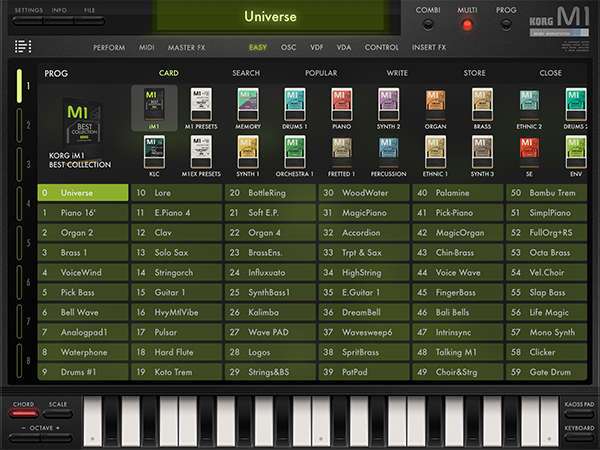 Data compatibility
Another welcome bonus. Do you still own an M1 or its Legacy Collection version? KORG engineers made sure you can easily transfer your data in system exclusive format to or from your computer. Your precious and carefully crafted presets can now be exchanged between the original synth and its software counterparts. Well done, guys!

Conclusion
Late eighties/early nineties music lovers, rejoice! With the KORG iM1 you’ll get those iconic M1 sounds (made fashionable again by popular dance/house tracks as well as indie artists like Bon Iver) right on your iPad, with the improvements you would expect from a touch screen interface and 21st-century must-have features.
Even if you think some of those sounds are too ‘clean’ for your music, I would suggest getting your hands dirty with the new easy-to-use interface and creating your own presets. You may come up with some interesting textures that can work great in your mix!