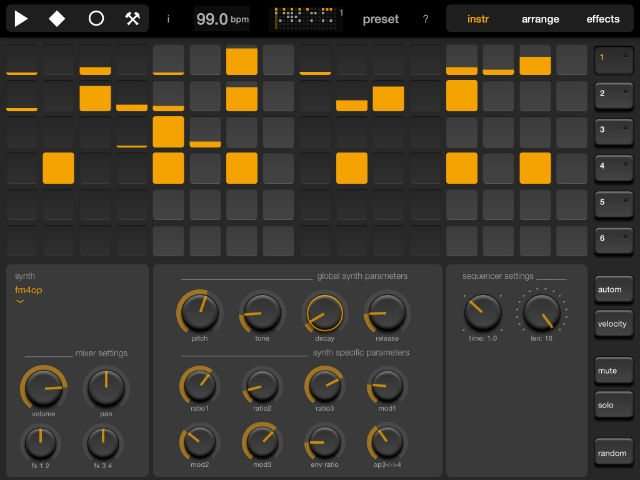 Elastic Drums, designed and developed by Oliver Greschke, was released for the iPhone this past December. It quickly became one of the drum synths of choice for many iOS musicians.
It has a really clean, easy to use interface. The 16 step sequencer adds the ability for each of the 6 channels to have its own tempo multiplier and length. It offers 10 different percussive synth engines, each with 12 parameters to play around with to get that custom sound you are looking for.
It supports Audiobus, IAA and core Midi. It also has 4 send effects channels with various mono and stereo effects.

Cool stuff
Some of the coolest parts of the app are the ability to automate all of the effects and each of the parameters for the drum synth. With a simple click of a button, you can automate any of the knobs you see on the screen. It takes a little practice and experimentation but once you get the hang of it, you can produce some really dynamic drum sounds that are constantly changing. When you record an automation on a particular knob and want to delete it, simply press and hold that knob. You will be presented with an option to delete the automation of that knob.

There is also a velocity setting that will allow you to adjust the parameters of one knob based on the step sequencer. This one was a little tricky to figure out. If you click on the velocity option then double click a knob, it will allow you to adjust that parameter by each individual step. The fuller the step, the higher the knob will turn. This could be useful if you wanted to emphasize certain snare hits or make the high hats build up. It is a little finicky to get the adjustment precise but overall it is a great feature.

Universal and CPU performance
In its most recent update, universal device support was added. Now it works natively on the iPad so that you can enjoy the app with more screen real estate. The app is a bit CPU intensive, since the sounds are generated in real-time by the synth engines so you will need at least an iPhone 5 and above to get the full potential of the app. It will work on older devices, but effects 3 and 4 are switched off to save on CPU.

Sounds good?
Do not judge the sounds of this app based on small ear buds or iPad speakers. They do not do the sound justice. I was not impressed by the sounds until I listened to them with my studio monitors. Having good headphones or speakers really make the sounds come alive. Although the sounds could benefit from some EQ, they sound good out of the box. I did run the app through AUFX:PeakQ and was able to get some really great results in enhancing the drum sounds. I will contact the developer about the possibility of adding some EQ parameters to the mixer window.

This ain’t no drifter
In the past, I have attempted to sync drum machines with Loopy so I can change the drum patterns on the fly without having a bunch of drum loops take up space on my Loopy session. Most of the current apps drift really badly but I have tested this app out and the midi works amazing with loopy. It starts, stops, and receives midi clock from Loopy flawlessly with no noticeable drift.

Conclusion
Overall I would recommend Elastic Drums for anybody wanting a synth drum machine with a clean interface and a lot of features. The developer seems to be keeping the app up to date with bug fixes and new features. The price is $9.99US, which is on par with most other drum machine/sequencers.

Giveaway expired. We’re going to contact the winners. Thanks everyone!