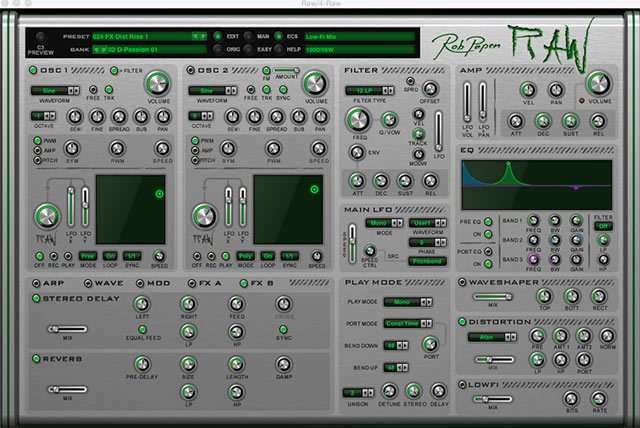 A two-oscillator synth with a multimode filter armed with a serious collection of distortion FX, RAW is a filthy synth. That’s the only way I can describe it. It can do clean, actually pristine, sounds, but so can so many other synths, RAW is for dirty, distorted, animaly sounds. Hurrah for animaly sounds!!!

First impressions
Green. The old school computer green of the various X/Y pads, dropdowns, logo and such, stands out against the machine grey/silver of the panel and Rob Papen style knobs. There’s odd splash of blue and purple, but green is the overriding theme here, bile green, gunge green… foetid green. Nice.
A quick flick through the ‘introduction’ preset banks immediately lets the user know exactly what this synth is about. There are some pretty patches, almost because they had to put them in, but the majority are sick. A trawl through the 27, yes 27, designer banks show plenty of variation, but mostly on the bilious tip. Some of the banks are not full, which is a shame for the preset browser, but there’s loads of tricky patches to play with and reverse engineer to see how this thing does its thing.

The Thing Is
Although RAW is, on the face of it, a traditional dual-oscillator synth, it does its own thing in most sections. The oscillators are different. You get a selection of the usual tonal and noise waveforms, plus user a drawable waveform each. These can be modified by pitch and amplitude envelopes plus a neat little pulse width modulation section, which sets the symmetry of the waveform plus an LFO. The usual tuning, spread (stack and detune), a sub oscillator with two waveforms plus oscillator sync and frequency modulation for osc 2. So the oscs are pretty well endowed, but there’s more: RAW.
RAW is phase distortion implemented by recordable X/Y pads (as in BLADE and BLUE). Set record, click and wobble on the X/Y pad, select play and things get nice and nasty, but well under control. The X and Y co-ordinates can also be controlled by the two LFOs, which, as well as the usual waveforms, can also access your two drawable waveforms. Neat. 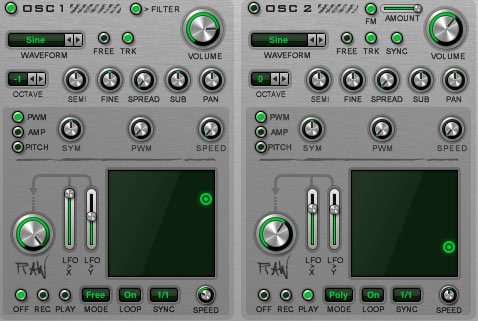 The filter has 28 types, from standard analogue style through comb and formant filters, with dedicated envelope and LFO. This is followed by a comprehensive distortion FX section: 3 band EQ plus low and high pass filters, an asymmetric waveshaper, a distortion unit with 13 types, clipping to fuzz and more, and finally a bitcrusher… you get the idea? Complex distortion with modulation in the oscillators, three flavours of distortion in the chain… filth!

Plus, you get a Rob Papen’s arpeggiator, the very nice wave drawing for oscillators and LFOs, with copy and paste functions, a detailed modulation matrix plus two FX sections: the first containing modulation FX – chorus, phaser etc., and a step controlled gater, the second containing a nice stereo delay and a reverb. There’s also an ‘Easy” mode which makes it easier on the eye as well.
All in all, there is nothing missing from RAW. It is a comprehensive example of good, functional programming. The design team, which included producers, had a clear idea of what they wanted and it’s here.

Who is it for?
Well, not me really, at least, not until I got under the skin of RAW. This instrument, or at least its preset collection, is squarely aimed at the aggressive end of Trance, Hardcore and Drum’n’Bass/Dubstep, but it is actually more than that. Once you dive in and get programming it is quite unique, particularly the oscillator section and rewards exploration and a bit of care in the programming. Give it a go…

Summary
This is a dirty sounding, versatile and unashamedly digital sounding synth with plenty of control.