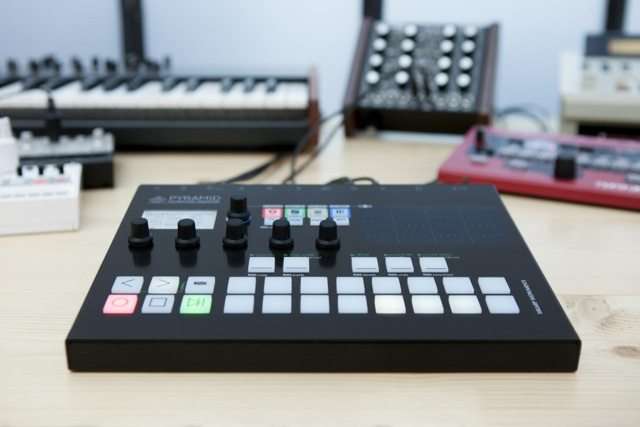 I remember using hardware sequencers in the Nineties, and then ditching them for a laptop. In the early 2000s for me, using a software sequencer on a laptop looked like an ‘obvious’ choice.
But what if we could look at hardware sequencers under a different perspective now? That’s what Squarp Instruments, a new French company, is trying to do with its first product, Pyramid Polyrhythmic Sequencer. You may have heard of it some months ago, but now the company is ready to accept preorders.

Welcome Pyramid
Pyramid Polyrhythmic Sequencer breakthrough — an advanced hardware standalone sequencer running proprietary PyraOs realtime processing firmware and boasting (multiple) MIDI, USB, CV/Gate, and (Sync48- and Sync24-configurable) DIN Sync connectivity, together with a host of fanciful features belying its compact form factor (its road-ready aluminium casing merely measures 268 x 206 x 44 mm).
The workflow is based around 64 tracks. Each track can be up to 64 bars in length and acts as a loop that contains polyphonic or monophonic notes, automations and effects, plays repeatedly and controls one of the electronic musical instruments connected to the MIDI 1, MIDI 2 +sync (DIN Sync), CV, and USB outputs. Of course, those instruments could be hardware (such as drum machines, synthesizers, and modular synth systems), virtual instruments (running on a connected computer or even an iOS device), or combinations thereof. The full flexibility of CV, G (Gate), and ENV — useful for sequencing any voltage-controlled parameter, such as an envelope generator or filter — connectivity will absolutely appeal to modular synth system users.

Pyramid Polyrhythmic Sequencer’s hands-on hardware user interface includes six accurate and clickable encoders, a wide, multi-finger touchpad, and an accelerometer — all of which can easily be assigned to an effect parameter, a MIDI CC message, or even the two CV inputs! Beautifully backlit, the white LCD clearly highlights all functions. One particularly noteworthy mention must go to the algorithmic euclidian sequencer engine available to each track to auto-generate atypical and rich rhythmic patterns… plucky users can change the number of total steps, the number of filled steps, the step width, and rotate the pattern — again, all on the fly!

Simple or odd stuff, you decide
Pyramid Polyrhythmic Sequencer is fully polyrhythmic, meaning different and unusual time signatures can be set for each of its 64 tracks to cleverly create shifted-beat sequences — set a track to 4/4 and add other tracks to simultaneously run with it in 5/4, 6/8, 15/8, or whatever — to bring stirring new musical flavours to productions.
I found interesting what Squarp Instruments’ Tom Hurlin said about Pyramid, and the potential move from the computer to a new hardware sequencer: “We felt that we had to create a machine that you could really feel — one that could satisfy any musician from any musical background. We wanted to have nice and playful controls, such as a multipoint touchpad, which was inspired by Korg’s Kaoss Pad and Kaossilator, and to be able to go from basic four-on-the-floor house beats to very experimental rhythms. Really, the important thing is that if you go from the computer to Pyramid then you don’t feel frustrated. The machine should enable you to do exactly what you had in mind when you started working with it, but also allow for some happy accidents along the way when tweaking!”.

100 Pyramid Polyrhythmic Sequencers are available to preorder online for €699.00 EUR/$799.00 USD/£524.00 GBP (including VAT) from the Squarp Instruments Store here: http://www.squarp.net/store.html (Shipping is scheduled to start in June 2015, including free delivery to 28 European Union member states, with a second batch becoming available worldwide in early Q4 2015).