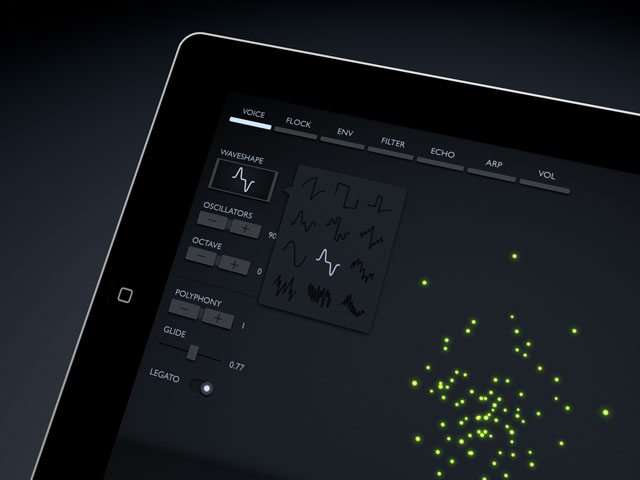 Photophore, would I take it with me on a desert island? We often think of things we could not live without. My friends and I would determine if something was useful by rating whether or not you would want it if you were stranded on a desert island. With the obvious, food, water and shelter out of the way, you have a 16gb iPad.
Somehow it survived the plane or boat crash that landed you on the island. What apps would you install before getting on an airplane or a cruise ship, you know just in case something happens and you end up stranded on an island?

I think that Photophore would make the list. It is super small in size, 10 MB, and it is super powerful. It provides a simple interface for programing and modifying your patches. It has a unique sound engine is made up of flocks of oscillators that mimic animal behavior. You can interact with the flock by swiping your finger across the screen and watching the little oscillators flee from your finger. This can create chaos and pitch modulation to add some dimension to a simple saw lead or pad sound (check my video at the bottom of this post for a quick overview of the app).

A few technical details
It has a total of 12 waveshapes with a possibility of 100 oscillators at a time. This is depending on the polyphony. If the polyphony is set to 1 then 100 are available per note. The number of oscillators decreases as the polyphony is increased. It also features a glide and legato setting. You can change the behavior of the oscillators with the flock settings. It has an AMP and Filter Envelope and the filter has a Low Pass or High Pass. It includes a basic Stereo Delay and a simple but effective arpeggiator. One thing to note is volume is not consistent across presets so be wary when using headphones.

Little niggles
A few other things to note, none of which is a deal breaker though. It does not currently have a midi learn function. It would be nice to twiddle with actual knobs. It also does not seem to update its midi input sources, so if you open it first, then open another app it may or may not see it in the midi input section. There have also been a few instances when I was switching back to Photophore and it seem to almost reset itself but it is so simple to program that it does not matter.

On the island
Over all I have not had any major issues and it seems to be stable and usable in its current state, hence why it is allowed on the island. In a recent update it received 6 new wave shapes and it has had 2 updates since its release. So it seems to have a good developer and maybe it will get a few more updates before you get stuck on that island. If all else fails, it would be a nice app to have to blend in with those giant killer bees that are approaching your campsite using its wasp patch.

Update: The app’s developer, Nick Dika, shared with us his thoughts on some of the points mentioned in the review. In his words “MIDI CC message support is definitely high on my list for the next major update, which I’m planning for later this summer. I can’t say yet exactly what form the controller support will take (fixed CCs or learn), but I am working on it as it’s one of the most common requests I get for Photophore.
Thanks for letting me know about the issue with controllers not showing up if the app is running when they’re connected. I will look into this and see if there is a way I can either automatically refresh the list or make it easier to refresh the list manually. I agree that would be less confusing!
Regarding the on-screen keyboard, I’m also working on ways of making this easier to use. Currently it’s just a very simple way of auditioning sounds, and Photophore is definitely a better experience with a MIDI controller. However I get a lot of requests for a better on-screen keyboard and so I’m working on this too. I’m hoping to add new features in a future update including scales, different sizes and ability to show different ranges.”.